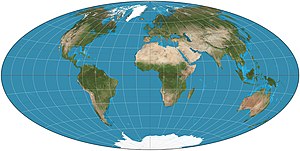 Hammer projection of the world

The Hammer projection is an equal-area map projection described by Ernst Hammer in 1892. Using the same 2:1 elliptical outer shape as the Mollweide projection, Hammer intended to reduce distortion toward the outer limbs, where it is extreme in the Mollweide.

are the x and y components of the equatorial Lambert azimuthal equal-area projection. Written out explicitly:

The inverse is calculated with the intermediate variable

The longitude and latitudes can then be calculated by

is the longitude from the central meridian and

Visually, the Aitoff and Hammer projections are very similar. The Hammer has seen more use because of its equal-area property. The Mollweide projection is another equal-area projection of similar aspect, though with straight parallels of latitude, unlike the Hammer's curved parallels.

William A. Briesemeister presented a variant of the Hammer in 1953. In this version, the central meridian is set to 10°E, the coordinate system is rotated to bring the 45°N parallel to the center, and the resulting map is squashed horizontally and reciprocally stretched vertically to achieve a 1.75:1.0 aspect ratio instead of the 2:1 of the Hammer. The purpose is to present the land masses more centrally and with lower distortion.[3]

Before projecting to Hammer, John Bartholomew rotated the coordinate system to bring the 45° north parallel to the center, leaving the prime meridian as the central meridian. He called this variant the "Nordic" projection.[3]