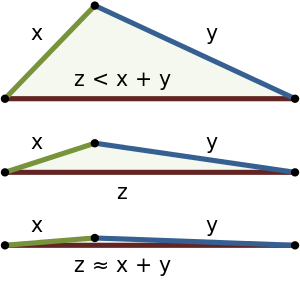 with equality only in the degenerate case of a triangle with zero area. In Euclidean geometry and some other geometries, the triangle inequality is a theorem about distances, and it is written using vectors and vector lengths (norms):

where the length z of the third side has been replaced by the vector sum x + y. When x and y are real numbers, they can be viewed as vectors in ℝ1, and the triangle inequality expresses a relationship between absolute values.

In Euclidean geometry, for right triangles the triangle inequality is a consequence of the Pythagorean theorem, and for general triangles a consequence of the law of cosines, although it may be proven without these theorems. The inequality can be viewed intuitively in either ℝ2 or ℝ3. The figure at the right shows three examples beginning with clear inequality (top) and approaching equality (bottom). In the Euclidean case, equality occurs only if the triangle has a 180° angle and two 0° angles, making the three vertices collinear, as shown in the bottom example. Thus, in Euclidean geometry, the shortest distance between two points is a straight line.

The triangle inequality is a defining property of norms and measures of distance. This property must be established as a theorem for any function proposed for such purposes for each particular space: for example, spaces such as the real numbers, Euclidean spaces, the Lp spaces (p ≥ 1), and inner product spaces.

Euclid's construction for proof of the triangle inequality for plane geometry.

Mathematical expression of the constraint on the sides of a triangle

The triangle inequality, as stated in words, literally translates into three inequalities (given that the side lengths a, b, c are all positive):

Another way to state it is

and thus that the longest side length is less than the semiperimeter.

A specialization of this argument to right triangles is:[7]

In a right triangle, the hypotenuse is greater than either of the two sides, and less than their sum.

Likewise, in the isosceles triangle ABC, the angles satisfy:

and so, in particular,

This theorem establishing inequalities is sharpened by Pythagoras' theorem to the equality that the square of the length of the hypotenuse equals the sum of the squares of the other two sides.

Some practical examples of the use of the triangle inequality

Consider a triangle whose sides are in an arithmetic progression and let the sides be a, a + d, a + 2d. Then the triangle inequality requires that

To satisfy all these inequalities requires

When d is chosen such that d = a/3, it generates a right triangle that is always similar to the Pythagorean triple with sides 3, 4, 5.

Now consider a triangle whose sides are in a geometric progression and let the sides be a, ar, ar2. Then the triangle inequality requires that

The first inequality requires a > 0, consequently it can be divided through and eliminated. With a > 0, the middle inequality only requires r > 0. This now leaves the first and third inequalities needing to satisfy

When r the common ratio is chosen such that r = Template:Sqrt it generates a right triangle that is always similar to the Kepler triangle.

Generalization of the inequality to any polygon

Example of the generalized polygon inequality for a quadrilateral

Consider a quadrilateral whose sides are in a geometric progression and let the sides be a, ar, ar2, ar3. Then the generalized polygon inequality requires that

These inequalities for a > 0 reduce to the following

The arc length of a curve is defined as the least upper bound of the lengths of polygonal approximations.

This generalization can be used to prove that the shortest curve between two points in Euclidean geometry is a straight line.

Generalization of the inequality to higher dimensions

Triangle inequality for norms of vectors.

In a normed vector space V, one of the defining properties of the norm is the triangle inequality:

that is, the norm of the sum of two vectors is at most as large as the sum of the norms of the two vectors. This is also referred to as subadditivity. For any proposed function to behave as a norm, it must satisfy this requirement.[13]

If the normed space is euclidean, or, more generally, strictly convex, then

The triangle inequality is useful in mathematical analysis for determining the best upper estimate on the size of the sum of two numbers, in terms of the sizes of the individual numbers.

There is also a lower estimate, which can be found using the reverse triangle inequality which states that for any real numbers x and y:

where the last form is a consequence of:

The Cauchy-Schwarz Inequality turns into an equality if and only if x and y are linearly dependent. The inequality

turns into an equality for linearly dependent

if and only if one of the vectors x or y is a nonnegative scalar of the other.

Taking the square root of the final result gives the triangle inequality.

where the xi are the components of vector x. For p = 2 the p-norm becomes the Euclidean norm:

which is Pythagoras' theorem in n-dimensions, a very special case corresponding to an inner product norm. Except for the case p = 2, the p-norm is not an inner product norm, because it does not satisfy the parallelogram law. The triangle inequality for general values of p is called Minkowski's inequality.[15] It takes the form:

In a metric space M with metric d, the triangle inequality is a requirement upon distance:

This version of the triangle inequality reduces to the one stated above in case of normed vector spaces where a metric is induced via d(x, y) ≔ ‖x − y‖, with x − y being the vector pointing from point y to x.

Any side of a triangle is greater than the difference between the other two sides.

In the case of a normed vector space, the statement is:

or for metric spaces, |d(y, x) − d(x, z)| ≤ d(y, z). This implies that the norm ‖–‖ as well as the distance function d(x, –) are Lipschitz continuous with Lipschitz constant 1, and therefore are in particular uniformly continuous.

The proof for the reverse triangle uses the regular triangle inequality, and

In the usual Minkowski space and in Minkowski space extended to an arbitrary number of spatial dimensions, assuming null or timelike vectors in the same time direction, the triangle inequality is reversed:

A physical example of this inequality is the twin paradox in special relativity.