HD 114613 (Gliese 501.2) is a fifth magnitude yellow subgiant that lies approximately 67 light-years away in the constellation of Centaurus. The star is host to a long-period giant planet, and may possibly be orbited by more. 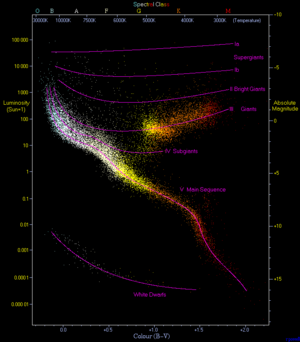 The position of HD 114613 on the Hertzsprung-Russell diagram. The star lies significantly above the main sequence.

HD 114613 is a bright star that lies about eight arcminutes south-east of Iota Centauri, towards the middle of Centaurus. Though it is fairly easily observable with the naked eye, the star does not have a Bayer or Flamsteed designation as the constellation of Centaurus contains many brighter stars.

The B-V colour and spectroscopic temperature of HD 114613 indicate that it has a spectral type of G3. This means that the star is only 50 kelvin cooler than the Sun, giving it the yellow hue typical of G-type stars. On the Hertzsprung-Russell diagram (left) the star lies significantly above the main sequence, and is close to the subgiant branch; this means that HD 114613 has depleted the hydrogen in its core through nuclear fusion, and is increasing in luminosity and radius while decreasing in temperature as it moves towards the giant branch. The cooling of the star as it evolves means that it had an earlier spectral type when on the main sequence, probably close to the F9V Iota Horologii.

As HD 114613 is ending hydrogen fusion, the star must be fairly old. When combined with a spectroscopically-derived mass of 1.25 ± 0.03 M☉ and a surface gravity of log 3.95 ± 0.03 g the implied age of the star is 5.20 ± 0.24 billion years,[5] making it slightly older than the Sun. Though stellar metallicities typically decrease with increasing stellar age, within the age range of the thin disk a wide range of metallicities are common; HD 114613's high iron abundance of 0.19 ± 0.01 dex (155 ± 4% of the solar abundance) is therefore not unusual. The rate of giant planet occurrence for Fe/H = 0.2 dex stars is about 15%,[9] which makes it fairly unsurprising that the star hosts a giant planet.

Somewhat peculiarly for a star that both had an earlier spectral type than the Sun and is currently a subgiant, HD 114613 has a magnetic cycle.[7] With a period of 897 ± 61 days, the star's magnetic cycle is about four-and-a-half times shorter than the Solar magnetic cycle and is one of the shortest magnetic cycles known.

Being bright and solar-type, HD 114613 is an attractive target for radial velocity (RV)-based planet searches.

HD 114613 was one of the 37 targets of the first RV-based planet search in the southern hemisphere, the ESO-CES survey that spanned between 1992 and 1998.[10] This survey did not detect any companion with several Jovian masses out to a few AU. An extension of this survey to the HARPS spectrograph provides further constraint, suggesting that there are no Jupiter-mass companions out to about 5 AU.[11]

However, that does not mean the star is not a planet host. Wittenmyer et al. (2014) found HD 114613 to show a moderate-amplitude variation in its radial velocity with a period of 10.5 years, indicative of a long-period companion.[18] The radial velocity semi-amplitude of 5.5 m/s translates to a planet with a minimum mass about half a Jupiter mass. The planet has an intermediate orbital eccentricity of 0.25, which means that it can be somewhat loosely considered a Jupiter analogue.