In fluid dynamics, the Euler equations are a set of quasilinear conservation equations governing adiabatic and inviscid flow. They are named after Leonhard Euler. The equations represent Cauchy balance equations of conservation of mass (continuity), momentum, and energy, corresponding to the Navier–Stokes equations with zero viscosity and zero thermal conductivity.[1] Historically, only the continuity and momentum equations have been derived by Euler. However, fluid dynamics literature often refers to the full set – including the energy equation – together as "the Euler equations".[2]

The Euler equations can be applied to incompressible and to compressible flow– assuming that the divergence of the flow velocity field is zero, or using either as an additional constraint an appropriate equation of state respectively.

The Euler equations first appeared in published form in Euler's article "Principes généraux du mouvement des fluides", published in Mémoires de l'Academie des Sciences de Berlin in 1757 (in this article Euler actually published only the general form of the continuity equation and the momentum equation;[3] the energy conservation equation would be obtained a century later). They were among the first partial differential equations to be written down. At the time Euler published his work, the system of equations consisted of the momentum and continuity equations, and thus was underdetermined except in the case of an incompressible fluid. An additional equation, which was later to be called the adiabatic condition, was supplied by Pierre-Simon Laplace in 1816.

During the second half of the 19th century, it was found that the equation related to the conservation of energy must at all times be kept, while the adiabatic condition is a consequence of the fundamental laws in the case of smooth solutions. With the discovery of the special theory of relativity, the concepts of energy density, momentum density, and stress were unified into the concept of the stress–energy tensor, and energy and momentum were likewise unified into a single concept, the energy–momentum vector.[4]

The conservation form, emphasizes the physical origins of Euler equations, and especially the contracted form is often the most convenient one for computational fluid dynamics simulations. Computationally, there are some advantages in using the conserved variables. This gives rise to a large class of numerical methods called conservative methods.[1]

In simple differential form, the incompressible Euler equations are:[5]

The equations above thus represent respectively conservation of mass (1 scalar equation) and momentum (1 vector equation containing N scalar components, where N is the phisical dimension of the space of interest).In 3D for example N=3 and the r and u vectors are explicitly ( x1, x2, x3 ) and ( u1, u2, u3 ). Flow velocity and pressure are the so-called physical variables.[1]

These equations may be expressed in subscript notation:

where the i and j subscripts label the N-dimensional space components. These equations may be more succinctly expressed using Einstein notation:

where the i and j subscripts label the N-dimensional space components: in 3D N=3 and the r and u vectors are explicitly ( x1, x2, x3 ) and ( u1, u2, u3 ), and matched indices imply a sum over those indices and

denotes the tensor product. The same identited expressed in Einstein notation are:

where I is the identity matrix with dimension N and δij its general element, the Kroenecker delta.

Thanks to these vector identities, the incompressible Euler equations can be put in the so-called conservation (or Eulerian) differential form, with common notation:

or with Einstein notation:

In conservation (or Eulerian) differential form, the compressible Euler equations are:

where the additional variables are:

The equations above thus represent conservation of mass, momentum, and energy. Mass density, Flow velocity and pressure are the so-called physical variables, while mass density, momentum density and total energy density are the so-called conserved variables.[1] These equations may be expressed in subscript notation. The momentum equation (the second one) includes the divergence of a dyadic product, and may be more succinctly expressed using Einstein notation:

The Euler equations are all expressable in conservative form, so they are equivalent to a single conservation equation:

or simply in Einstein notation:

where the conservation quantity y is a vector, and F is the flux matrix.

For the compressible Euler equations:

For certain problems, especially when used to analyze compressible flow in a duct or in case the flow is cylindrically or spherically symmetric, the one-dimensional Euler equations are a useful first approximation. Generally, the Euler equations are solved by Riemann's method of characteristics. This involves finding curves in plane of independent variables (i.e., x and t) along which partial differential equations (PDE's) degenerate into ordinary differential equations (ODE's). Numerical solutions of the Euler equations rely heavily on the method of characteristics.

Expanding the fluxes can be an important part of constructing numerical solvers, for example by exploiting (approximate) solutions to the Riemann problem. From the original equations as given above in vector form, the equations are written as:

where Ai are called the flux Jacobians defined as the matrices:

Here, the flux Jacobians Ai are still functions of the state vector y, so this form of the Euler equations is quasilinear, just like the original equations. This Jacobian form is equivalent to the vector equation, at least in regions where the state vector y varies smoothly.

The compressible Euler equations can be decoupled into a set of N+2 wave equations that decribes sound in Eulerian continuum if they are expressed in characteristic variables instead of conserved variables. As an example, the one-dimensional (1-D) Euler equations in Jacobian form is considered:

In 1D there is only one matrix A. It is diagonalizable, which means it can be decomposed with a projection matrix into a diagonal matrix:

Here p1, p2, p3 are the right eigenvectors of the matrix A corresponding with the eigenvalues λ1, λ2 and λ3, and the total enthalpy density is defined as:

Defining the characteristic variables as:

Since A is constant, multiplying the original 1-D equation in flux-Jacobian form with P−1 yields:

The equations have been decoupled into N+2 wave equations, with the eigenvalues being the wave speeds. The variables wi are called Riemann invariants or, for general hyperbolic systems, they are called characteristic variables.

If the equation of state is the ideal gas law, to derive the full Jacobians in matrix form, as given below:[6]

The speed of sound a is given by:

where the enthalpy density h is defined (in general, not only in case of ideal gas) as:

Euler equations can be obtained by linearization of some more precise equations like Navier-Stokes equations in around a local equilibrium state given by a Maxwellian y = y0, and are given by:

where Ai(y0), are the values of respectively Ai(y) at some reference state y = y0.

In differential material or lagrangian form, the equations are:

Where the time material derivative has been used:

In fact by subtracting the velocity times the mass conservation term, the momentum equation in conservation form, can also be expressed as:

or, in vector notation:

which is a continuum mechanics form for Newton's second law of motion. Similarly, by subtracting the velocity times the above momentum conservation term, the third equation (energy conservation), can also be expressed as:

that can be contracted with the material derivative as:

or changing the variable from total energy density to total enthalpy density:

In N space dimensione there are thus N+2 equations and N+3 unknowns. Closing the system requires an equation of state; the most commonly used is the ideal gas law:

where γ is the adiabatic index.

Note the odd form for the energy equation; see Rankine–Hugoniot equation. The extra terms involving p may be interpreted as the mechanical work done on a fluid element by its neighbor fluid elements. These terms sum to zero in an incompressible fluid.

The well-known Bernoulli's equation can be derived by integrating Euler's equation along a streamline, under the assumption of constant density and a sufficiently stiff equation of state.

In the case of steady flow, it is convenient to choose the Frenet–Serret frame along a streamline as the coordinate system for describing the momentum part of the Euler equations:[7]

where u, p and ρ denote the flow velocity, the pressure and the density, respectively.

Let {es, en, eb } be a Frenet–Serret orthonormal basis which consists of a tangential unit vector, a normal unit vector, and a binormal unit vector to the streamline, respectively. Since a streamline is a curve that is tangent to the velocity vector of the flow, the left-handed side of the above equation, the substantial derivative of velocity, can be described as follows:

where R is the radius of curvature of the streamline.

Therefore, the momentum part of the Euler equations for a steady flow is found to have a simple form:

For barotropic flow ( ρ=ρ(p) ), Bernoulli's equation is derived from the first equation:

The third equation expresses that pressure is constant along the binormal axis. 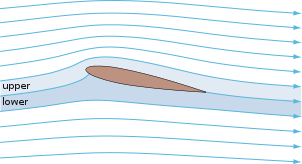 Let r be the distance from the center of curvature of the streamline, then the second equation is written as follows:

In a steady flow of an inviscid fluid without external forces, the center of curvature of the streamline lies in the direction of decreasing radial pressure.

Although this relationship between the pressure field and flow curvature is very useful, it doesn't have a name in the English-language scientific literature.[8] Japanese fluid-dynamicists call the relationship the "Streamline curvature theorem". [9]

This "theorem" explains clearly why there are such low pressures in the centre of vortices,[8] which consist of concentric circles of streamlines. This also is a way to intuitively explain why airfoils generate lift forces.[8]

{{#invoke:see also|seealso}} The Euler equations are quasilinear hyperbolic equations and their general solutions are waves. Under certain assumptions they can be simplified leading to Burgers equation. Much like the familiar oceanic waves, waves described by the Euler Equations 'break' and so-called shock waves are formed; this is a nonlinear effect and represents the solution becoming multi-valued. Physically this represents a breakdown of the assumptions that led to the formulation of the differential equations, and to extract further information from the equations we must go back to the more fundamental integral form. Then, weak solutions are formulated by working in 'jumps' (discontinuities) into the flow quantities – density, velocity, pressure, entropy – using the Rankine–Hugoniot shock conditions. Physical quantities are rarely discontinuous; in real flows, these discontinuities are smoothed out by viscosity and by heat transfer. (See Navier–Stokes equations)

Shock propagation is studied – among many other fields – in aerodynamics and rocket propulsion, where sufficiently fast flows occur.