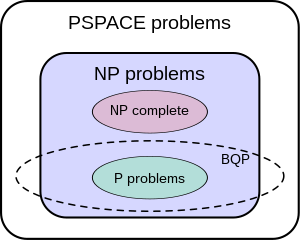 The suspected relationship of BQP to other problem spaces[1]

In computational complexity theory, BQP (bounded error quantum polynomial time) is the class of decision problems solvable by a quantum computer in polynomial time, with an error probability of at most 1/3 for all instances. It is the quantum analogue of the complexity class BPP.

In other words, there is an algorithm for a quantum computer (a quantum algorithm) that solves the decision problem with high probability and is guaranteed to run in polynomial time. On any given run of the algorithm, it has a probability of at most 1/3 that it will give the wrong answer.

Similarly to other "bounded error" probabilistic classes the choice of 1/3 in the definition is arbitrary. We can run the algorithm a constant number of times and take a majority vote to achieve any desired probability of correctness less than 1, using the Chernoff bound. Detailed analysis shows that the complexity class is unchanged by allowing error as high as 1/2 − n−c on the one hand, or requiring error as small as 2−nc on the other hand, where c is any positive constant, and n is the length of input.

The number of qubits in the computer is allowed to be a polynomial function of the instance size. For example, algorithms are known for factoring an n-bit integer using just over 2n qubits (Shor's algorithm).

Usually, computation on a quantum computer ends with a measurement. This leads to a collapse of quantum state to one of the basis states. It can be said that the quantum state is measured to be in the correct state with high probability.

Quantum computers have gained widespread interest because some problems of practical interest are known to be in BQP, but suspected to be outside P. Some prominent examples are:

Relationship to other complexity classes

BQP contains P and BPP and is contained in AWPP,[3] PP[4] and PSPACE.[5] In fact, BQP is low for PP, meaning that a PP machine achieves no benefit from being able to solve BQP problems instantly, an indication of the possible difference in power between these similar classes.

As the problem of P ≟ PSPACE has not yet been solved, the proof of inequality between BQP and classes mentioned above is supposed to be difficult.[5] The relation between BQP and NP is not known.

Adding postselection to BQP results in the complexity class PostBQP which is equal to PP.[6][7]