In computational complexity theory, PSPACE is the set of all decision problems that can be solved by a Turing machine using a polynomial amount of space.

If we denote by SPACE(t(n)), the set of all problems that can be solved by Turing machines using O(t(n)) space for some function t of the input size n, then we can define PSPACE formally as[1]

PSPACE is a strict superset of the set of context-sensitive languages.

Relation among other classes 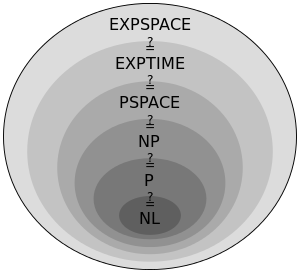 A representation of the relation among complexity classes

The following relations are known between PSPACE and the complexity classes NL, P, NP, PH, EXPTIME and EXPSPACE (note that ⊊ is not the same as ⊈):

It is known that in the first and second line, at least one of the set containments must be strict, but it is not known which. It is widely suspected that all are strict.

An alternative characterization of PSPACE is the set of problems decidable by an alternating Turing machine in polynomial time, sometimes called APTIME or just AP.[4]

PSPACE can be characterized as the quantum complexity class QIP.[5]

{{#invoke:main|main}} A language B is PSPACE-complete if it is in PSPACE and it is PSPACE-hard, which means for all A ∈ PSPACE, A

An example of a PSPACE-complete problem is the quantified Boolean formula problem (usually abbreviated to QBF or TQBF; the T stands for "true").[8]