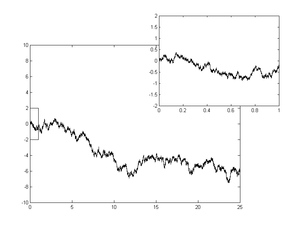 A single realization of a one-dimensional Wiener process 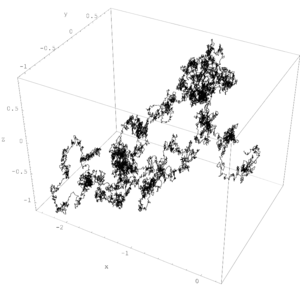 A single realization of a three-dimensional Wiener process

In mathematics, the Wiener process is a continuous-time stochastic process named in honor of Norbert Wiener. It is often called standard Brownian motion, after Robert Brown. It is one of the best known Lévy processes (càdlàg stochastic processes with stationary independent increments) and occurs frequently in pure and applied mathematics, economics, quantitative finance and physics.

The Wiener process plays an important role both in pure and applied mathematics. In pure mathematics, the Wiener process gave rise to the study of continuous time martingales. It is a key process in terms of which more complicated stochastic processes can be described. As such, it plays a vital role in stochastic calculus, diffusion processes and even potential theory. It is the driving process of Schramm–Loewner evolution. In applied mathematics, the Wiener process is used to represent the integral of a Gaussian white noise process, and so is useful as a model of noise in electronics engineering, instrument errors in filtering theory and unknown forces in control theory.

The Wiener process has applications throughout the mathematical sciences. In physics it is used to study Brownian motion, the diffusion of minute particles suspended in fluid, and other types of diffusion via the Fokker–Planck and Langevin equations. It also forms the basis for the rigorous path integral formulation of quantum mechanics (by the Feynman–Kac formula, a solution to the Schrödinger equation can be represented in terms of the Wiener process) and the study of eternal inflation in physical cosmology. It is also prominent in the mathematical theory of finance, in particular the Black–Scholes option pricing model.

Characterizations of the Wiener process

The Wiener process Wt is characterized by three properties:[1]

The last condition means that if 0 ≤ s1 < t1 ≤ s2 < t2 then Wt1−Ws1 and Wt2−Ws2 are independent random variables, and the similar condition holds for n increments.

A third characterization is that the Wiener process has a spectral representation as a sine series whose coefficients are independent N(0, 1) random variables. This representation can be obtained using the Karhunen–Loève theorem.

Another characterization of a Wiener process is the Definite integral (from zero to time t) of a zero mean, unit variance, delta correlated ("white") Gaussian process.

The Wiener process can be constructed as the scaling limit of a random walk, or other discrete-time stochastic processes with stationary independent increments. This is known as Donsker's theorem. Like the random walk, the Wiener process is recurrent in one or two dimensions (meaning that it returns almost surely to any fixed neighborhood of the origin infinitely often) whereas it is not recurrent in dimensions three and higher{{ safesubst:#invoke:Unsubst||date=__DATE__ |$B= {{#invoke:Category handler|main}}{{#invoke:Category handler|main}}[citation needed] }}. Unlike the random walk, it is scale invariant, meaning that

Properties of a one-dimensional Wiener process

The unconditional probability density function at a fixed time t:

The expectation is zero:

The variance, using the computational formula, is t:

The covariance and correlation:

The results for the expectation and variance follow immediately from the definition that increments have a normal distribution, centered at zero. Thus

The results for the covariance and correlation follow from the definition that non-overlapping increments are independent, of which only the property that they are uncorrelated is used. Suppose that t1 < t2.

Wiener (1923) also gave a representation of a Brownian path in terms of a random Fourier series. If

are independent Gaussian variables with mean zero and variance one, then

represent a Brownian motion on

is a Brownian motion on

The joint distribution of the running maximum

To get the unconditional distribution of

A demonstration of Brownian scaling, showing

for decreasing c. Note that the average features of the function do not change while zooming in, and note that it zooms in quadratically faster horizontally than vertically.

For every c > 0 the process

is another Wiener process.

is another Wiener process.

A class of Brownian martingales

If a polynomial p(x, t) satisfies the PDE

then the stochastic process

is a martingale, which shows that the quadratic variation of W on [0, t] is equal to t. It follows that the expected time of first exit of W from (−c, c) is equal to c2.

More generally, for every polynomial p(x, t) the following stochastic process is a martingale:

where a is the polynomial

is a martingale, which shows that the quadratic variation of the martingale

Some properties of sample paths

The same holds for local minima.

Law of the iterated logarithm

The image of the Lebesgue measure on [0, t] under the map w (the pushforward measure) has a density Lt(·). Thus,

for a wide class of functions f (namely: all continuous functions; all locally integrable functions; all non-negative measurable functions). The density Lt is (more exactly, can and will be chosen to be) continuous. The number Lt(x) is called the local time at x of w on [0, t]. It is strictly positive for all x of the interval (a, b) where a and b are the least and the greatest value of w on [0, t], respectively. (For x outside this interval the local time evidently vanishes.) Treated as a function of two variables x and t, the local time is still continuous. Treated as a function of t (while x is fixed), the local time is a singular function corresponding to a nonatomic measure on the set of zeros of w.

These continuity properties are fairly non-trivial. Consider that the local time can also be defined (as the density of the pushforward measure) for a smooth function. Then, however, the density is discontinuous, unless the given function is monotone. In other words, there is a conflict between good behavior of a function and good behavior of its local time. In this sense, the continuity of the local time of the Wiener process is another manifestation of non-smoothness of the trajectory. 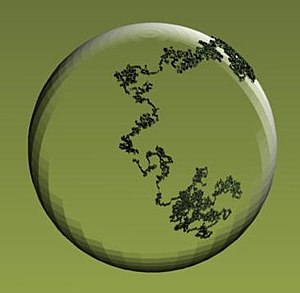 The stochastic process defined by

Two random processes on the time interval [0, 1] appear, roughly speaking, when conditioning the Wiener process to vanish on both ends of [0,1]. With no further conditioning, the process takes both positive and negative values on [0, 1] and is called Brownian bridge. Conditioned also to stay positive on (0, 1), the process is called Brownian excursion.[3] In both cases a rigorous treatment involves a limiting procedure, since the formula P(A|B) = P(A ∩ B)/P(B) does not apply when P(B) = 0.

A geometric Brownian motion can be written

It is a stochastic process which is used to model processes that can never take on negative values, such as the value of stocks.

The time of hitting a single point x > 0 by the Wiener process is a random variable with the Lévy distribution. The family of these random variables (indexed by all positive numbers x) is a left-continuous modification of a Lévy process. The right-continuous modification of this process is given by times of first exit from closed intervals [0, x].

The local time L = (Lxt)x ∈ R, t ≥ 0 of a Brownian motion describes the time that the process spends at the point x. Formally

where δ is the Dirac delta function. The behaviour of the local time is characterised by Ray–Knight theorems.

The time-integral of the Wiener process

is called integrated Brownian motion or integrated Wiener process. It arises in many applications and can be shown to have the distribution N(0, t3/3), calculus lead using the fact that the covariation of the Wiener process is

Every continuous martingale (starting at the origin) is a time changed Wiener process.

Example: 2Wt = V(4t) where V is another Wiener process (different from W but distributed like W).

and V is another Wiener process.

In general, if M is a continuous martingale then

where A(t) is the quadratic variation of M on [0, t], and V is a Wiener process.

Then only the following two cases are possible:

other cases (such as

etc.) are of probability 0.

Especially, a nonnegative continuous martingale has a finite limit (as t → ∞) almost surely.

All stated (in this subsection) for martingales holds also for local martingales.

A wide class of continuous semimartingales (especially, of diffusion processes) is related to the Wiener process via a combination of time change and change of measure.

Using this fact, the qualitative properties stated above for the Wiener process can be generalized to a wide class of continuous semimartingales.[5][6]

Brownian scaling, time reversal, time inversion: the same as in the real-valued case.

Rotation invariance: for every complex number c such that |c| = 1 the process cZt is another complex-valued Wiener process.

If f is an entire function then the process

is a time-changed complex-valued Wiener process.

and U is another complex-valued Wiener process.