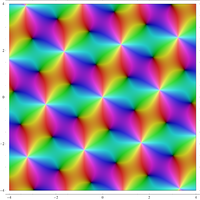 Weierstrass P function defined over a subset of the complex plane using a standard visualization technique in which white corresponds to a pole, black to a zero, and maximal saturation to

Note the regular lattice of poles, and two interleaving lattices of zeros.

The Weierstrass elliptic function can be defined in three closely related ways, each of which possesses certain advantages. One is as a function of a complex variable z and a lattice Λ in the complex plane. Another is in terms of z and two complex numbers ω1 and ω2 defining a pair of generators, or periods, for the lattice. The third is in terms of z and a modulus Template:Tau in the upper half-plane. This is related to the previous definition by Template:Tau = ω2/ω1, which by the conventional choice on the pair of periods is in the upper half-plane. Using this approach, for fixed z the Weierstrass functions become modular functions of Template:Tau.

are the points of the period lattice, so that

for any pair of generators of the lattice defines the Weierstrass function as a function of a complex variable and a lattice.

is a complex number in the upper half-plane, then

The above sum is homogeneous of degree minus two, from which we may define the Weierstrass ℘ function for any pair of periods, as

We may compute ℘ very rapidly in terms of theta functions; because these converge so quickly, this is a more expeditious way of computing ℘ than the series we used to define it. The formula here is

There is a second-order pole at each point of the period lattice (including the origin). With these definitions,

is an even function and its derivative with respect to z, ℘′, is an odd function.

Further development of the theory of elliptic functions shows that the condition on Weierstrass's function is determined up to addition of a constant and multiplication by a non-zero constant by the condition on the poles alone, amongst all meromorphic functions with the given period lattice. 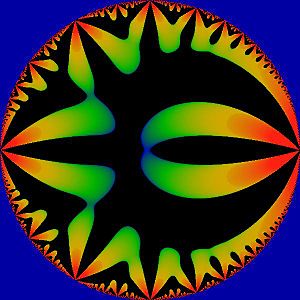 The real part of the invariant g3 as a function of the nome q on the unit disk.

The imaginary part of the invariant g3 as a function of the nome q on the unit disk.

In a deleted neighborhood of the origin, the Laurent series expansion of

The numbers g2 and g3 are known as the invariants. The summations after the coefficients 60 and 140 are the first two Eisenstein series, which are modular forms when considered as functions G4(Template:Tau) and G6(Template:Tau), respectively, of Template:Tau = ω2/ω1 with Im(Template:Tau) > 0.

Note that g2 and g3 are homogeneous functions of degree −4 and −6; that is,

Thus, by convention, one frequently writes

to lie in the upper half-plane. Thus,

The Fourier series for

can be written in terms of the square of the nome

is the divisor function. This formula may be rewritten in terms of Lambert series.

The invariants may be expressed in terms of Jacobi's theta functions. This method is very convenient for numerical calculation: the theta functions converge very quickly. In the notation of Abramowitz and Stegun, but denoting the primitive half-periods by

is the period ratio,

is the nome, and

With this notation, the ℘ function satisfies the following differential equation:

This relation can be quickly verified by comparing the poles of both sides, for example, the pole at z = 0 of lhs is

Comparing these two yields the relation above.

The Weierstrass elliptic function can be given as the inverse of an elliptic integral. Let

Here, g2 and g3 are taken as constants. Then one has

The above follows directly by integrating the differential equation. 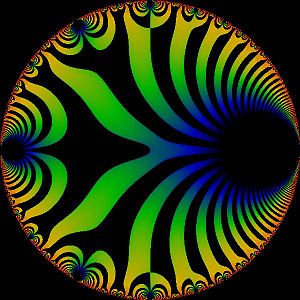 The real part of the discriminant as a function of the nome q on the unit disk.

The modular discriminant Δ is defined as the quotient by 16 of the discriminant of the right-hand side of the above differential equation:

This is studied in its own right, as a cusp form, in modular form theory (that is, as a function of the period lattice).

is the Dedekind eta function.

The presence of 24 can be understood by connection with other occurrences, as in the eta function and the Leech lattice.

The discriminant is a modular form of weight 12. That is, under the action of the modular group, it transforms as

with Template:Tau being the half-period ratio, and a,b,c and d being integers, with ad − bc = 1.

For the Fourier coefficients of

The linear and constant coefficients (g2 and g3, respectively) are related to the roots by the equations (see Elementary symmetric polynomial).[1]

depend on Template:Tau and can be expressed in terms of theta functions. As before, let,

, then these can also be expressed as theta functions. In simplified form,

, all three are real and it is conventional to name them so that

, it is conventional to write

is real and non-negative.

. Since the square of the derivative of Weierstrass' elliptic function equals the above cubic polynomial of the function's value,

. Conversely, if the function's value equals a root of the polynomial, the derivative is zero.

whereas the third half-period is completely imaginary

The Weierstrass elliptic functions have several properties that may be proved:

(a symmetrical version would be

and the duplication formula

unless 2z is a period.

The case with 1 a basic half-period

, much of the above theory becomes simpler; it is then conventional to write

. For a fixed Template:Tau in the upper half-plane, so that the imaginary part of Template:Tau is positive, we define the Weierstrass ℘ function by

The sum extends over the lattice {n+mTemplate:Tau : n and m in Z} with the origin omitted. Here we regard Template:Tau as fixed and ℘ as a function of z; fixing z and letting Template:Tau vary leads into the area of elliptic modular functions.

℘ is a meromorphic function in the complex plane with a double pole at each lattice points. It is doubly periodic with periods 1 and Template:Tau; this means that ℘ satisfies

The above sum is homogeneous of degree minus two, and if c is any non-zero complex number,

from which we may define the Weierstrass ℘ function for any pair of periods. We also may take the derivative (of course, with respect to z) and obtain a function algebraically related to ℘ by

depend only on Template:Tau, being modular forms. The equation

defines an elliptic curve, and we see that

is a parametrization of that curve. The totality of meromorphic doubly periodic functions with given periods defines an algebraic function field associated to that curve. It can be shown that this field is

so that all such functions are rational functions in the Weierstrass function and its derivative.

One can wrap a single period parallelogram into a torus, or donut-shaped Riemann surface, and regard the elliptic functions associated to a given pair of periods to be functions defined on that Riemann surface.

℘ can also be expressed in terms of theta functions; because these converge very rapidly, this is a more expeditious way of computing ℘ than the series used to define it.

The function ℘ has two zeros (modulo periods) and the function ℘′ has three. The zeros of ℘′ are easy to find: since ℘′ is an odd function they must be at the half-period points. On the other hand it is very difficult to express the zeros of ℘ by closed formula, except for special values of the modulus (e.g. when the period lattice is the Gaussian integers). An expression was found, by Zagier and Eichler.[2]

The Weierstrass theory also includes the Weierstrass zeta function, which is an indefinite integral of ℘ and not doubly periodic, and a theta function called the Weierstrass sigma function, of which his zeta-function is the log-derivative. The sigma-function has zeros at all the period points (only), and can be expressed in terms of Jacobi's functions. This gives one way to convert between Weierstrass and Jacobi notations.

and their argument w equals