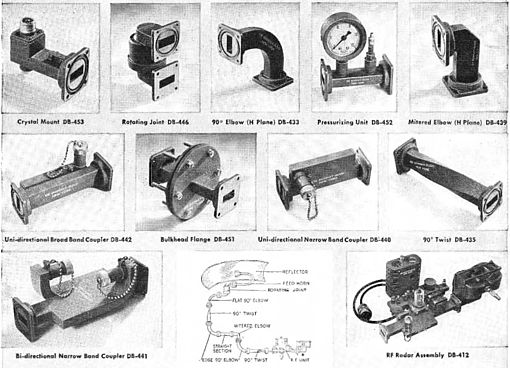 In electromagnetics and communications engineering, the term waveguide may refer to any linear structure that conveys electromagnetic waves between its endpoints. However, the original[1] and most common[1] meaning is a hollow metal pipe used to carry radio waves. This type of waveguide is used as a transmission line mostly at microwave frequencies, for such purposes as connecting microwave transmitters and receivers to their antennas, in equipment such as microwave ovens, radar sets, satellite communications, and microwave radio links.

A dielectric waveguide employs a solid dielectric rod rather than a hollow pipe. An optical fibre is a dielectric guide designed to work at optical frequencies. Transmission lines such as microstrip, coplanar waveguide, stripline or coaxial cable may also be considered to be waveguides.

The electromagnetic waves in a (metal-pipe) waveguide may be imagined as travelling down the guide in a zig-zag path, being repeatedly reflected between opposite walls of the guide. For the particular case of rectangular waveguide, it is possible to base an exact analysis on this view. Propagation in a dielectric waveguide may be viewed in the same way, with the waves confined to the dielectric by total internal reflection at its surface. Some structures, such as non-radiative dielectric waveguides and the Goubau line, use both metal walls and dielectric surfaces to confine the wave.

The first waveguide was proposed by J. J. Thomson in 1893 and experimentally verified by Oliver Lodge in 1894; the mathematical analysis of the propagating modes within a hollow metal cylinder was first performed by Lord Rayleigh in 1897. (McLachan, 1947)

Depending on the frequency, waveguides can be constructed from either conductive or dielectric materials. Generally, the lower the frequency to be passed the larger the waveguide is. For example the natural waveguide the earth forms given by the dimensions between the conductive ionosphere and the ground as well as the circumference at the median altitude of the Earth is resonant at 7.83 Hz. This is known as Schumann resonance. On the other hand, waveguides used in extremely high frequency (EHF) communications can be less than a millimeter in width.

Electromagnetic waveguides are analyzed by solving Maxwell's equations, or their reduced form, the electromagnetic wave equation, with boundary conditions determined by the properties of the materials and their interfaces. These equations have multiple solutions, or modes, which are eigenfunctions of the equation system. Each mode is characterized by a cutoff frequency below which the mode cannot exist in the guide.

Waveguide propagation modes depend on the operating wavelength and polarization and the shape and size of the guide. The longitudinal mode of a waveguide is a particular standing wave pattern formed by waves confined in the cavity. The transverse modes are classified into different types:

In hollow waveguides (single conductor), TEM waves are not possible, since Maxwell's Equations will give that the electric field must then have zero divergence and zero curl and be equal to zero at boundaries, resulting in a zero field (or, equivalently,

with boundary conditions guaranteeing only the trivial solution). However, TEM waves can propagate in coaxial cables because there are two conductors.

The mode with the lowest cutoff frequency is termed the dominant mode of the guide. It is usual to choose the size of the guide such that only this one mode can exist in the frequency band of operation. In rectangular and circular (hollow pipe) waveguides, the dominant modes are designated the TE1,0 mode and TE1,1 modes respectively. 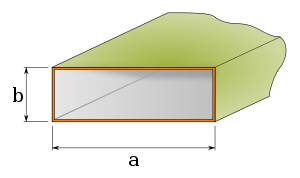 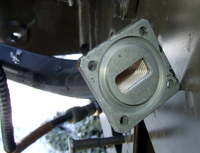 Flexible waveguide from a J-Band radar

In the microwave region of the electromagnetic spectrum, a waveguide normally consists of a hollow metallic conductor. These waveguides can take the form of single conductors with or without a dielectric coating, e.g. the Goubau line and helical waveguides. Hollow waveguides must be one-half wavelength or more in diameter in order to support one or more transverse wave modes.

Waveguides may be filled with pressurized gas to inhibit arcing and prevent multipaction, allowing higher power transmission. Conversely, waveguides may be required to be evacuated as part of evacuated systems (e.g. electron beam systems).

A slotted waveguide is generally used for radar and other similar applications. The waveguide structure has the capability of confining and supporting the energy of an electromagnetic wave to a specific relatively narrow and controllable path.

A closed waveguide is an electromagnetic waveguide (a) that is tubular, usually with a circular or rectangular cross section, (b) that has electrically conducting walls, (c) that may be hollow or filled with a dielectric material, (d) that can support a large number of discrete propagating modes, though only a few may be practical, (e) in which each discrete mode defines the propagation constant for that mode, (f) in which the field at any point is describable in terms of the supported modes, (g) in which there is no radiation field, and (h) in which discontinuities and bends cause mode conversion but not radiation.

The dimensions of a hollow metallic waveguide determine which wavelengths it can support, and in which modes. Typically the waveguide is operated so that only a single mode is present. The lowest order mode possible is generally selected. Frequencies below the guide's cutoff frequency will not propagate. It is possible to operate waveguides at higher order modes, or with multiple modes present, but this is usually impractical.

Waveguides are almost exclusively made of metal and mostly rigid structures. There are certain types of "corrugated" waveguides that have the ability to flex and bend but only used where essential since they degrade propagation properties. Due to propagation of energy in mostly air or space within the waveguide, it is one of the lowest loss transmission line types and highly preferred for high frequency applications where most other types of transmission structures introduce large losses. Due to the skin effect at high frequencies, electric current along the walls penetrates typically only a few micrometers into the metal of the inner surface. Since this is where most of the resistive loss occurs, it is important that the conductivity of interior surface be kept as high as possible. For this reason, most waveguide interior surfaces are plated with copper, silver, or gold.

Voltage standing wave ratio (VSWR) measurements may be taken to ensure that a waveguide is contiguous and has no leaks or sharp bends. If such bends or holes in the waveguide surface are present, this may diminish the performance of both transmitter and receiver equipment connected at either end. Poor transmission through the waveguide may also occur as a result of moisture build up which corrodes and degrades conductivity of the inner surfaces, which is crucial for low loss propagation. For this reason, waveguides are nominally fitted with microwave windows at the outer end that will not interfere with propagation but keep the elements out. Moisture can also cause fungus build up or arcing in high power systems such as radio or radar transmitters. Moisture in waveguides can typically be prevented with silica gel, a desiccant, or slight pressurization of the waveguide cavities with dry nitrogen or argon. Desiccant silica gel canisters may be attached with screw-on nibs and higher power systems will have pressurized tanks for maintaining pressure including leakage monitors. Arcing may also occur if there is a hole, tear or bump in the conducting walls, if transmitting at high power (usually 200 watts or more). Waveguide plumbing [2] is crucial for proper waveguide performance. Voltage standing waves occur when impedance mismatches in the waveguide cause energy to reflect back in the opposite direction of propagation. In addition to limiting the effective transfer of energy, these reflections can cause higher voltages in the waveguide and damage equipment.

In practice, waveguides act as the equivalent of cables for super high frequency (SHF) systems. For such applications, it is desired to operate waveguides with only one mode propagating through the waveguide. With rectangular waveguides, it is possible to design the waveguide such that the frequency band over which only one mode propagates is as high as 2:1 (i.e. the ratio of the upper band edge to lower band edge is two). The relationship between the longest wavelength that will propagate through a rectangular waveguide is a simple one. Given that W is the greater of its two dimensions, and lambda is the wavelength, then lambda = 2W.

With circular waveguides, the highest possible bandwidth allowing only a single mode to propagate is only 1.3601:1.[3]

The first condition is to allow for applications near band edges. The second condition limits dispersion, a phenomenon in which the velocity of propagation is a function of frequency. It also limits the loss per unit length. The third condition is to avoid evanescent-wave coupling via higher order modes. The fourth condition is that which allows a 2:1 operation bandwidth. Although it is possible to have a 2:1 operating bandwidth when the height is less than half the width, having the height exactly half the width maximizes the power that can propagate inside the waveguide before dielectric breakdown occurs.

Below is a table of waveguide standards. The waveguide name WR stands for waveguide rectangular, and the number is the inner dimension width of the waveguide in hundredths of an inch (0.01 inch = 0.254 mm) rounded to the nearest hundredth of an inch.

‡ Not an international standard

Dielectric rod and slab waveguides are used to conduct radio waves, mostly at millimeter wave frequencies and above.[6][7] These confine the radio waves by total internal reflection from the step in refractive index due to the change in dielectric constant at the material surface.[8] At millimeter wave frequencies and above, metal is not a good conductor, so metal waveguides can have increasing attenuation. At these wavelengths dielectric waveguides can have lower losses than metal waveguides. Optical fiber is a form of dielectric waveguide used at optical wavelengths.

One difference between dielectric and metal waveguides is that at a metal surface the electromagnetic waves are tightly confined; at high frequencies the electric and magnetic fields penetrate a very short distance into the metal. In contrast, the surface of the dielectric waveguide is an interface between two dielectrics, so the fields of the wave penetrate outside the dielectric in the form of an evanescent (non-propagating) wave.[8]

This article is based in part on material from Federal Standard 1037C and from MIL-STD-188, and ATIS