Variational Bayesian methods are a family of techniques for approximating intractable integrals arising in Bayesian inference and machine learning. They are typically used in complex statistical models consisting of observed variables (usually termed "data") as well as unknown parameters and latent variables, with various sorts of relationships among the three types of random variables, as might be described by a graphical model. As is typical in Bayesian inference, the parameters and latent variables are grouped together as "unobserved variables". Variational Bayesian methods are primarily used for two purposes:

In the former purpose (that of approximating a posterior probability), variational Bayes is an alternative to Monte Carlo sampling methods — particularly, Markov chain Monte Carlo methods such as Gibbs sampling — for taking a fully Bayesian approach to statistical inference over complex distributions that are difficult to directly evaluate or sample from. In particular, whereas Monte Carlo techniques provide a numerical approximation to the exact posterior using a set of samples, Variational Bayes provides a locally-optimal, exact analytical solution to an approximation of the posterior.

Variational Bayes can be seen as an extension of the EM (expectation-maximization) algorithm from maximum a posteriori estimation (MAP estimation) of the single most probable value of each parameter to fully Bayesian estimation which computes (an approximation to) the entire posterior distribution of the parameters and latent variables. As in EM, it finds a set of optimal parameter values, and it has the same alternating structure as does EM, based on a set of interlocked (mutually dependent) equations that cannot be solved analytically.

For many applications, variational Bayes produces solutions of comparable accuracy to Gibbs sampling at greater speed. However, deriving the set of equations used to iteratively update the parameters often requires a large amount of work compared with deriving the comparable Gibbs sampling equations. This is the case even for many models that are conceptually quite simple, as is demonstrated below in the case of a basic non-hierarchical model with only two parameters and no latent variables.

Mathematical derivation of the mean-field approximation

In variational inference, the posterior distribution over a set of unobserved variables

is approximated by a variational distribution,

, selected with the intention of making

similar to the true posterior,

. The lack of similarity is measured in terms of a dissimilarity function

and hence inference is performed by selecting the distribution

The KL-divergence can be written as

is fixed with respect to

minimizes the KL divergence of

. By appropriate choice of

becomes tractable to compute and to maximize. Hence we have both an analytical approximation

, and a lower bound

plus the entropy of

for each of the factors

(in terms of the distribution minimizing the KL divergence, as described above) can be expressed as:

is the expectation of the logarithm of the joint probability of the data and latent variables, taken over all variables not in the partition.

In practice, we usually work in terms of logarithms, i.e.:

) and is usually reinstated by inspection, as the rest of the expression can usually be recognized as being a known type of distribution (e.g. Gaussian, gamma, etc.).

Using the properties of expectations, the expression

Consider a simple non-hierarchical Bayesian model consisting of a set of i.i.d. observations from a Gaussian distribution, with unknown mean and variance.[3] In the following, we work through this model in great detail to illustrate the workings of the variational Bayes method.

For mathematical convenience, in the following example we work in terms of the precision — i.e. the reciprocal of the variance — rather than the variance itself. (From a theoretical standpoint, precision and variance are equivalent since there is a one-to-one correspondence between the two.)

We place conjugate prior distributions on the unknown mean and variance, i.e. the mean also follows a Gaussian distribution while the precision follows a gamma distribution. In other words:

and our goal is to infer the posterior distribution

The joint probability of all variables can be rewritten as

where the individual factors are

, i.e. that the posterior distribution factorizes into independent factors for

. This type of assumption underlies the variational Bayesian method. The true posterior distribution does not in fact factor this way (in fact, in this simple case, it is known to be a Gaussian-gamma distribution), and hence the result we obtain will be an approximation.

In the above derivation,

refer to values that are constant with respect to

. Note that the term

is not a function of

and will have the same value regardless of the value of

. Hence in line 3 we can absorb it into the constant term at the end. We do the same thing in line 7.

The last line is simply a quadratic polynomial in

. Since this is the logarithm of

, we can see that

itself is a Gaussian distribution.

With a certain amount of tedious math (expanding the squares inside of the braces, separating out and grouping the terms involving

and completing the square over

), we can derive the parameters of the Gaussian distribution:

Note that all of the above steps can be shortened by using the formula for the sum of two quadratics.

is similar to above, although we omit some of the details for the sake of brevity.

Exponentiating both sides, we can see that

is a gamma distribution. Specifically:

Algorithm for computing the parameters

Let us recap the conclusions from the previous sections:

Applying these formulas to the above equations is trivial in most cases, but the equation for

We can then write the parameter equations as follows, without any expectations:

Note that there are circular dependencies among the formulas for

. This naturally suggests an EM-like algorithm:

We then have values for the hyperparameters of the approximating distributions of the posterior parameters, which we can use to compute any properties we want of the posterior — e.g. its mean and variance, a 95% highest-density region (the smallest interval that includes 95% of the total probability), etc.

It can be shown that this algorithm is guaranteed to converge to a local maximum, and since both posterior distributions are in the exponential family, this local maximum will be a global maximum.

The above example shows the method by which the variational-Bayesian approximation to a posterior probability density in a given Bayesian network is derived:

Due to all of the mathematical manipulations involved, it is easy to lose track of the big picture. The important things are:

Variational Bayes (VB) is often compared with expectation maximization (EM). The actual numerical procedure is quite similar, in that both are alternating iterative procedures that successively converge on optimum parameter values. The initial steps to derive the respective procedures are also vaguely similar, both starting out with formulas for probability densities and both involving significant amounts of mathematical manipulations.

However, there are a number of differences. Most important is what is being computed. 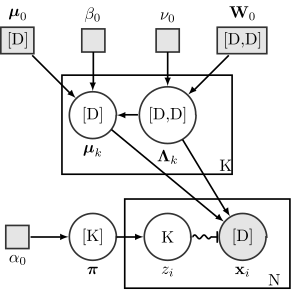 Bayesian Gaussian mixture model using plate notation. Smaller squares indicate fixed parameters; larger circles indicate random variables. Filled-in shapes indicate known values. The indication [K] means a vector of size K; [D,D] means a matrix of size D×D; K alone means a categorical variable with K outcomes. The squiggly line coming from z ending in a crossbar indicates a switch — the value of this variable selects, for the other incoming variables, which value to use out of the size-K array of possible values.

The interpretation of the above variables is as follows:

The joint probability of all variables can be rewritten as

where the individual factors are

where we have defined

Exponentiating both sides of the formula for

sum to 1 over all values of

is a product of single-observation multinomial distributions, and factors over each individual

, which is distributed as a single-observation multinomial distribution with parameters

Furthermore, we note that

which is a standard result for categorical distributions.

, note that it automatically factors into

due to the structure of the graphical model defining our Gaussian mixture model, which is specified above.

Taking the exponential of both sides, we recognize

as a Dirichlet distribution

, the result is a Gaussian-Wishart distribution given by

Finally, notice that these functions require the values of

, which make use of

, which is defined in turn based on

. Now that we have determined the distributions over which these expectations are taken, we can derive formulas for them:

These results lead to

so that the corresponding values sum to 1.

This suggests an iterative procedure that alternates between two steps:

Note that these steps correspond closely with the standard EM algorithm to derive a maximum likelihood or maximum a posteriori (MAP) solution for the parameters of a Gaussian mixture model. The responsibilities

in the E step correspond closely to the posterior probabilities of the latent variables given the data, i.e.

; the computation of the statistics