Andrey Andreyevich Markov was born in Ryazan as the son of the secretary of the public forest management of Ryazan, Andrey Grigorevich Markov, and his first wife Nadezhda Petrovna Markova.

In the beginning of the 1860s Andrey Grigorevich moved to St. Petersburg to become an asset manager of Ekaterina Aleksandrovna Valvatyeva.

In 1866, Andrey Andreevich's school life began with his entrance into St. Petersburg's fifth grammar school. Already during his school time Andrey was intensely engaged in higher mathematics. As a 17-year-old grammar school student, he informed Viktor Bunyakovsky, Aleksandr Korkin, and Yegor Ivanovich Zolotarev about an apparently new method to solve linear ordinary differential equations, and he was invited to the so-called Korkin Saturdays, where Korkin's students regularly met. In 1874, he finished the school and began his studies at the physico-mathematical department of St. Petersburg University.

In 1877, Markov was awarded a gold medal for his outstanding solution of the problem

During the following year, he passed the candidate's examinations, and he remained at the university to prepare for a lecturer's position.

In April 1880, Markov defended his master's thesis "About Binary Quadratic Forms with Positive Determinant", which was encouraged by Aleksandr Korkin and Yegor Zolotarev.

Five years later, in January 1885, there followed his doctoral thesis "About Some Applications of Algebraic Continuous Fractions".

His pedagogical work began after the defense of his master's thesis in autumn 1880. As a privatdozent he lectured on differential and integral calculus. Later he lectured alternately on "introduction to analysis", probability theory (succeeding Chebyshev, who had left the university in 1882) and the calculus of differences. From 1895 through 1905 he also lectured in differential calculus. 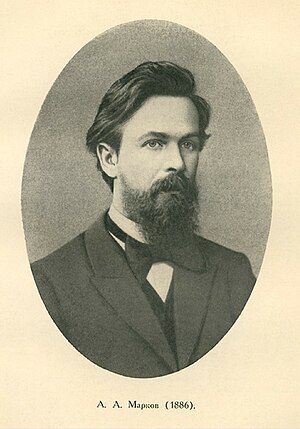 One year after the defense of his doctoral thesis, Markov was appointed extraordinary professor (1886) and in the same year he was elected adjunct to the Academy of Sciences. In 1890, after the death of Viktor Bunyakovsky, Markov became an extraordinary member of the academy. His promotion to an ordinary professor of St. Petersburg University followed in the fall of 1894.

In 1896, Markov was elected an ordinary member of the academy as the successor of Chebyshev. In 1905, he was appointed merited professor and was granted the right to retire, which he did immediately. Until 1910, however, he continued to lecture in the calculus of differences.

In connection with student riots in 1908, professors and lecturers of St. Petersburg University were ordered to monitor their students. Markov refused to accept this decree, and he wrote an explanation in which he declined to be an "agent of the governance". Markov was removed from further teaching duties at St. Petersburg University, and hence he decided to retire from the university.

In 1913, the council of St. Petersburg elected nine scientists honorary members of the university. Markov was among them, but his election was not affirmed by the minister of education. The affirmation only occurred four years later, after the February Revolution in 1917. Markov then resumed his teaching activities and lectured on probability theory and the calculus of differences until his death in 1922.