Backing of US currency

To finance the costs of World War I the U.S. Government increased income taxes (see the War Revenue Act of 1917) and government debt, called war bonds. Traditionally, the government borrowed from other countries, but there were no other countries from which to borrow in 1917.[2]

The Treasury raised funding throughout the war by selling $21.5 billion in 'Liberty bonds.' These bonds were sold at subscription where officials created coupon price and then sold it at par value. At this price, subscriptions could be filled in as little as one day, but usually remained open for several weeks, depending on demand for the bond.[2]

After the war, the Liberty bonds were reaching maturity, but the Treasury was unable to pay each down fully with only limited budget surpluses. The resolution to this problem was to refinance the debt with variable short and medium-term maturities. Again the Treasury issued debt through fixed-price subscription, where both the coupon and the price of the debt were dictated by the Treasury.[2]

The problems with debt issuance became apparent in the late-1920s. The system suffered from chronic over-subscription, where interest rates were so attractive that there were more purchasers of debt than supplied by the government. This indicated that the government was paying too much for debt. As government debt was undervalued, debt purchasers could buy from the government and immediately sell to another market participant at a higher price.[2]

In 1929, the US Treasury shifted from the fixed-price subscription system to a system of auctioning where 'Treasury Bills' would be sold to the highest bidder. Securities were then issued on a pro rata system where securities would be allocated to the highest bidder until their demand was full. If more treasuries were supplied by the government, they would then be allocated to the next highest bidder. This system allowed the market, rather than the government, to set the price. On December 10, 1929, the Treasury issued its first auction. The result was the issuing of $224 million three-month bills. The highest bid was at 99.310 with the lowest bid accepted at 99.152.[2]

"Treasury bill" redirects here. Note that the Bank of England issues these in the United Kingdom.

Treasury bills (or T-bills) mature in one year or less. Like zero-coupon bonds, they do not pay interest prior to maturity; instead they are sold at a discount of the par value to create a positive yield to maturity.[3] Many regard Treasury bills as the least risky investment available to U.S. investors.{{ safesubst:#invoke:Unsubst||date=__DATE__ |$B= {{#invoke:Category handler|main}}{{#invoke:Category handler|main}}[citation needed] }}

Regular weekly T-Bills are commonly issued with maturity dates of 28 days (or 4 weeks, about a month), 91 days (or 13 weeks, about 3 months), 182 days (or 26 weeks, about 6 months), and 364 days (or 52 weeks, about 1 year). Treasury bills are sold by single-price auctions held weekly. Offering amounts for 13-week and 26-week bills are announced each Thursday for auction, usually at 11:30 a.m., on the following Monday and settlement, or issuance, on Thursday. Offering amounts for 4-week bills are announced on Monday for auction the next day, Tuesday, usually at 11:30 a.m., and issuance on Thursday. Offering amounts for 52-week bills are announced every fourth Thursday for auction the next Tuesday, usually at 11:30 am, and issuance on Thursday. Purchase orders at TreasuryDirect must be entered before 11:00 on the Monday of the auction. The minimum purchase, effective April 7, 2008, is $100. (This amount formerly had been $1,000.) Mature T-bills are also redeemed on each Thursday. Banks and financial institutions, especially primary dealers, are the largest purchasers of T-bills.

During periods when Treasury cash balances are particularly low, the Treasury may sell cash management bills (or CMBs). These are sold at a discount and by auction just like weekly Treasury bills. They differ in that they are irregular in amount, term (often less than 21 days), and day of the week for auction, issuance, and maturity. When CMBs mature on the same day as a regular weekly bill, usually Thursday, they are said to be on-cycle. The CMB is considered another reopening of the bill and has the same CUSIP. When CMBs mature on any other day, they are off-cycle and have a different CUSIP number.

Treasury bills are quoted for purchase and sale in the secondary market on an annualized discount percentage, or basis.

General calculation for the discount yield for Treasury bills is:{{ safesubst:#invoke:Unsubst||$N=Dubious |date=__DATE__ |$B= {{#invoke:Category handler|main}}[dubious – discuss] }}[4]

This is the modern usage of "Treasury Note" in the U.S., for the earlier meanings see Treasury Note (disambiguation).

The 10-year Treasury note has become the security most frequently quoted when discussing the performance of the U.S. government bond market and is used to convey the market's take on longer-term macroeconomic expectations.

The U.S. Federal government suspended issuing 30-year Treasury bonds for four years from February 18, 2002 to February 9, 2006.[5] As the U.S. government used budget surpluses to pay down Federal debt in the late 1990s,[6] the 10-year Treasury note began to replace the 30-year Treasury bond as the general, most-followed metric of the U.S. bond market. However, because of demand from pension funds and large, long-term institutional investors, along with a need to diversify the Treasury's liabilities - and also because the flatter yield curve meant that the opportunity cost of selling long-dated debt had dropped - the 30-year Treasury bond was re-introduced in February 2006 {fact|date=December 2014} and is now issued quarterly.[7] This brought the U.S. in line with Japan and European governments issuing longer-dated maturities amid growing global demand from pension funds.{{ safesubst:#invoke:Unsubst||date=__DATE__ |$B= {{#invoke:Category handler|main}}{{#invoke:Category handler|main}}[citation needed] }} Since the 1970s the 10 Year Treasury Note and the 30 year fixed mortgage have had a very tight correlation.[8]

Treasury Inflation-Protected Securities (or TIPS) are the inflation-indexed bonds issued by the U.S. Treasury. The principal is adjusted to the Consumer Price Index (CPI), the commonly used measure of inflation. When the CPI rises, the principal adjusts upward. If the index falls, the principal adjusts downwards.[9] The coupon rate is constant, but generates a different amount of interest when multiplied by the inflation-adjusted principal, thus protecting the holder against the official inflation rate (as asserted by the CPI). TIPS were introduced in 1997.[10] TIPS are currently offered in 5-year, 10-year and 30-year maturities.[11]

Created by the financial industry

Separate Trading of Registered Interest and Principal Securities (or STRIPS) are T-Notes, T-Bonds and TIPS whose interest and principal portions of the security have been separated, or "stripped"; these may then be sold separately (in units of $100 face value) in the secondary market. The name derives from the days before computerization, when paper bonds were physically traded; traders would literally tear the interest coupons off of paper securities for separate resale.

The government does not directly issue STRIPS; they are formed by investment banks or brokerage firms, but the government does register STRIPS in its book-entry system. They cannot be bought through TreasuryDirect, but only through a broker.

STRIPS are used by the Treasury and split into individual principal and interest payments, which get resold in the form of zero-coupon bonds. Because they then pay no interest, there is not any interest to re-invest, and so there is no reinvestment risk with STRIPS.

The "Certificate of Indebtedness" is a Treasury security that does not earn any interest and has no fixed maturity. It can only be held in a TreasuryDirect account and bought or sold directly through the Treasury. It is intended to be used as a source of funds for traditional Treasury security purchases. Purchases and redemptions can be made at any time.[12]

Savings bonds were created to finance World War I, and were originally called Liberty Bonds. Unlike Treasury Bonds, they are not marketable. In 2002, the Treasury Department started changing the savings bond program by lowering interest rates and closing its marketing offices.[14] As of January 1, 2012, financial institutions no longer sell paper savings bonds.[15] The annual (calendar year) purchase limit for electronic Series EE and Series I savings bonds is $10,000 for each series. The limit is applied per Social Security Number (SSN) or Taxpayer Identification Number (TIN). For paper Series I Savings Bonds purchased through IRS tax refunds (see below), the purchase limit is $5,000 per SSN, which is in addition to the online purchase limit.[16]

Series EE bonds reach maturity (double in value) 20 years from issuance though they continue to earn interest for a total of 30 years. Interest accrues monthly and is paid when the holder cashes the bond. For bonds issued before May 2005 the rate of interest is recomputed every six months at 90% of the average five-year Treasury yield for the preceding six months. Bonds issued in May 2005 or later pay a fixed interest rate for the life of the bond (0.10% in November 2014).[17] At 0.10%, a $100 bond would be worth about $102 just before 20 years, but will be adjusted to the maturity value of $200 at 20 years (giving it an effective rate of 3.5%) then continue to earn the fixed rate for 10 more years. In the space of a decade, interest dropped from well over 5% to 0.7% for new bonds in 2009.[18] Paper EE bonds, last sold in 2011, were issued with a face value of twice their purchase price, so a $100 bond could be bought for $50, but would not be worth $100 until maturity. 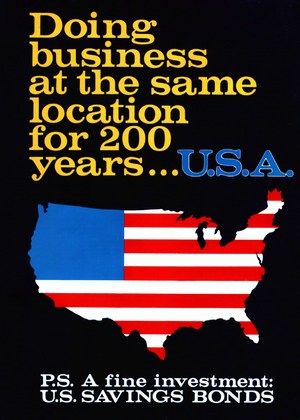 Series I bonds have a variable yield based on inflation. The interest rate consists of two components: the first is a fixed rate which will remain constant over the life of the bond. The second component is a variable rate reset every six months from the time the bond is purchased based on the current inflation rate. New rates are published on May 1 and November 1 of every year.[19] The fixed rate is determined by the Treasury Department (0.00% in November 2014); the variable component is based on the Consumer Price Index (CPI-U) from a six-month period ending one month prior to the reset time (0.74% in November 2014, reflecting the CPI-U from March to September, published in mid-October, for an effective annual inflation rate of 1.48%).[17] As an example, if someone purchases a bond in February, they will lock in the current fixed rate forever, but the inflation component will be based on the rate published the previous November. In August, six months after the purchase month, the inflation component will now change to the rate that was published in May while the fixed rate remains locked. Interest accrues monthly, in full, on the first day of the month (i.e., a Savings Bond will have the same value on July 1 as on July 31, but on August 1 its value will increase for the August interest accrual). The fixed portion of the rate has varied from as much as 3.6% to 0%. During times of deflation (during part of 2009), the negative inflation portion can wipe out the return of the fixed portion, but the combined rate cannot go below 0% and the bond will not lose value.[19]

Besides being available for purchase online, tax payers may purchase I-bonds using a portion of their tax refund via IRS Form 8888 Allocation of Refund. Bonds purchased using Form 8888 are issued as paper bonds and mailed to the address listed on the tax return. Tax payers may purchase bonds for themselves or other persons such as children or grandchildren. The remainder of the tax payer's refund may be received by direct deposit or check.[20]

Series HH bonds have been discontinued. Unlike Series EE and I bonds, they do not increase in value, but pay interest every six months for 20 years. When they are cashed in or mature they are still worth face value. Issuance of Series HH bonds ended August 31, 2004.[21][22]