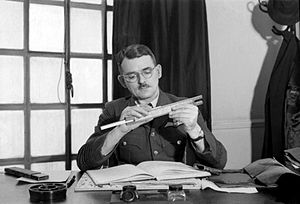 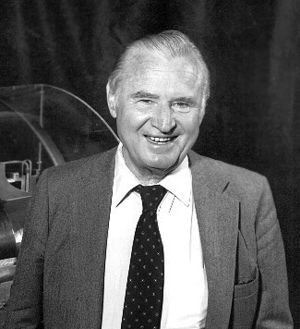 Template:Seriesbox aircraft propulsion The turbojet is a jet engine, usually used in aircraft. It consists of a gas turbine with a propelling nozzle. The gas turbine has an air inlet, a compressor, a combustion chamber, and a turbine (that drives the compressor). The compressed air from the compressor is heated by the fuel in the combustion chamber and then allowed to expand through the turbine. The turbine exhaust is then expanded in the propelling nozzle where it is accelerated to high speed to provide thrust.[1] Two engineers, Frank Whittle in the United Kingdom and Hans von Ohain in Germany, developed the concept independently into practical engines during the late 1930s.

Turbojets have been replaced in slower aircraft by turboprops which use less fuel. At higher speeds, where the propeller is no longer efficient, they have been replaced by turbofans. The turbofan is quieter and uses less fuel than the turbojet. Turbojets are still common in medium range cruise missiles, due to their high exhaust speed, small frontal area, and relative simplicity.

The jet engine is only efficient at high vehicle speeds, which limits their usefulness apart from aircraft. Turbojet engines have been used in isolated cases to power vehicles other than aircraft, typically for attempts on land speed records. Where vehicles are 'turbine powered' this is more commonly by use of a turboshaft engine, a development of the gas turbine engine where an additional turbine is used to drive a rotating output shaft. These are common in helicopters and hovercraft. Turbojets have also been used experimentally to clear snow from switches in railyards.

Heinkel He 178, the world's first aircraft to fly purely on turbojet power, using an HeS 3 engine

The first patent for using a gas turbine to power an aircraft was filed in 1921 by Frenchman Maxime Guillaume.[2] His engine was to be an axial-flow turbojet, but was never constructed, as it would have required considerable advances over the state of the art in compressors.

Practical axial compressors were made possible by ideas from A.A.Griffith in a seminal paper in 1926 ("An Aerodynamic Theory of Turbine Design").

The centrifugal-flow turbojet was first patented in 1930 by Frank Whittle of the Royal Air Force, and in Germany, Hans von Ohain patented a similar engine in 1935.[3]

The first turbojet to run was the Power Jets WU which ran on 12 April 1937.

On 27 August 1939 the Heinkel He 178 became the world's first aircraft to fly under turbojet power with test-pilot Erich Warsitz at the controls,[4] thus becoming the first practical jet plane. The first two operational turbojet aircraft, the Messerschmitt Me 262 and then the Gloster Meteor entered service towards the end of World War II in 1944.

The first jet engines were turbojets, with either a centrifugal compressor (as in the Heinkel HeS 3), or Axial compressors (as in the Junkers Jumo 004) which gave a smaller diameter, although longer, engine. By replacing the propeller used on piston engines with a high speed jet of exhaust higher aircraft speeds were attainable.

One of the last applications for a turbojet engine was the Concorde which used the Olympus 593 engine. At the time of its design the turbojet was still seen as the optimum for cruising at twice the speed of sound despite the advantage of turbofans for lower speeds. For the Concorde less fuel was required to produce a given thrust for a mile at Mach 2.0 than a modern high-bypass turbofan such as General Electric CF6 at its Mach 0.86 optimum speed.Template:Cn

Turbojet engines had a significant impact on commercial aviation. Aside from giving faster flight speeds turbojets had greater reliability than piston engines, with some models demonstrating dispatch reliability rating in excess of 99.9%. Pre-jet commercial aircraft were designed with as many as 4 engines in part because of concerns over in-flight failures. Overseas flight paths were plotted to keep planes within an hour of a landing field, lengthening flights. The increase in reliability that came with the turbojet enabled three and two-engine designs, and more direct long-distance flights.[5]

High-temperature alloys were a reverse salient, a key technology that dragged progress on jet engines. Jet engines built in the 1930s and 1940s had to be overhauled every 10 or 20 hours due to creep failure and other types of damage to blades. It was not until the 1950s that superalloy technology allowed more economically practical engines. [6]

Early German turbojets had severe limitations on the amount of running they could do due to the lack of suitable high temperature materials for the turbines. British engines such as the Rolls-Royce Welland used better materials giving improved durability. The Welland was type certificated for 80 hours initially, later extended to 150 hours between overhauls, as a result of an extended 500 hour run being achieved in tests.[7] A few of the original fighters still exist with their original engines, but many have been re-engined with more modern engines with greater fuel efficiency and a longer TBO (such as the reproduction Me-262 powered by General Electric J85s). 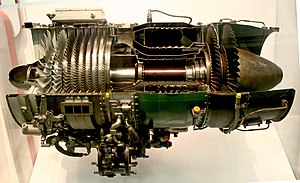 General Electric in the United States was in a good position to enter the jet engine business due to its experience with the high temperature materials used in their turbosuperchargers during World War II.[8]

Water injection was a common method used to increase thrust,usually during takeoff, in early turbojets that were thrust-limited by their allowable turbine entry temperature. The water, whilst it increased thrust at the temperature limit, prevented complete combustion often leaving a very visible smoke trail.

Allowable turbine entry temperatures have increased steadily over time both with the introduction of superior alloys, and coatings, and with the introduction and progressive effectiveness of blade cooling designs. On early engines the turbine temperature limit had to be monitored, and avoided, by the pilot, typically during starting and at maximum thrust settings. Automatic temperature limiting was introduced to reduce pilot workload and reduce the liklehood of turbine damage due to overtemperature.

An intake, or tube, is needed in front of the compressor to help direct the incoming air smoothly into the moving compressor blades. Older engines had stationary vanes in front of the moving blades. These vanes also helped to direct the air onto the blades. The intake is also shaped to minimise any flow losses when the compressor is accelerating the air through the intake at zero and low aircraft speeds, and to slow the flow down for the compressor when the aircraft is operating above Mach 1. The air flowing into a turbojet engine must always be subsonic, regardless of the speed of the aircraft itself.

The compressor is driven by the turbine. It rotates at high speed, adding energy to the airflow and at the same time squeezing (compressing) it into a smaller space. Compressing the air increases its pressure and temperature. The smaller the compressor the faster it turns. At the large end of the range the GE-90-115 fan rotates at about 2,500 RPM while a small helicopter engine compressor rotates at about 50,000 RPM.

In most turbojet-powered aircraft, bleed air is extracted from the compressor section at various stages to perform a variety of jobs including air conditioning/pressurization, engine inlet anti-icing and turbine cooling. Bleeding air off decreases the overall efficiency of the engine, but the usefulness of the compressed air outweighs the loss in efficiency.

Compressor types used in turbojets were typically axial or centrifugal.

After leaving the compressor, the air enters the combustion chamber.

The fuel-air mixture can only burn in slow moving air so an area of reverse flow is maintained by the fuel nozzles for the approximately stoichiometric burning in the primary zone. Further compressor air is introduced which completes the combustion process and reduces the temperature of the combustion products to a level which the turbine can accept. Less than 25% of the air is typically used for combustion, as an overall lean mixture is required to keep within the turbine temperature limits.

Hot gases leaving the combustor expand through the turbine. Typical materials for turbines include inconel and Nimonic.[9] The turbine vanes and blades have internal cooling passages. Air from the compressor is passed through these to keep the metal temperature within limits.

In the first stage the turbine is largely an impulse turbine (similar to a pelton wheel) and rotates because of the impact of the hot gas stream. Later stages are convergent ducts that accelerate the gas. Energy is transferred into the shaft through momentum exchange in the opposite way to energy transfer in the compressor. The power developed by the turbine drives the compressor as well as accessories, like fuel, oil, and hydraulic pumps that are driven by the accessory gearbox.

After the turbine, the gases expand through the exhaust nozzle producing a high velocity jet. In a convergent nozzle, the ducting narrows progressively to a throat. The nozzle pressure ratio on a turbojet is high enough at higher thrust settings to cause the nozzle to choke.

If, however, a convergent-divergent de Laval nozzle is fitted, the divergent (increasing flow area) section allows the gases to reach supersonic velocity within the divergent section. Additional thrust is generated by the higher resulting exhaust velocity.

Thrust was most commonly increased in turbojets with water/methanol injection or afterburning. Some engines used both at the same time.

An afterburner or "reheat jetpipe" is a combustion chamber added to reheat the turbine exhaust gases. The fuel consumption is very high, typically four times that of the main engine. Afterburners are used almost exclusively on supersonic aircraft, most being military aircraft. Two supersonic airliners, Concorde and the TU-144, also used afterburners as does Scaled Composites White Knight, a carrier aircraft for the experimental SpaceShipOne suborbital spacecraft.

If the speed of the jet is equal to sonic velocity the nozzle is said to be choked. If the nozzle is choked the pressure at the nozzle exit plane is greater than atmospheric pressure, and extra terms must be added to the above equation to account for the pressure thrust.[12]

The speed of the jet

must exceed the true airspeed of the aircraft

if there is to be a net forward thrust on the airframe. The speed

can be calculated thermodynamically based on adiabatic expansion.[13]

The operation of a typical turbojet is modelled approximately by the Brayton Cycle.

The efficiency of a gas turbine is increased by raising the overall pressure ratio, requiring higher temperature compressor materials, and raising the turbine entry temperature, requiring better turbine materials and/or improved vane/blade cooling. However, when used in a turbojet application, where the output from the gas turbine is used in a propelling nozzle, raising the turbine temperature increases the jet velocity. This reduces the propulsive efficiency giving a loss in overall efficiency, as reflected by the higher fuel consumption, or SFC.[14]