The trefoil knot is named after the three-leaf clover (or trefoil) plant.

The trefoil knot can be defined as the curve obtained from the following parametric equations:

In algebraic geometry, the trefoil can also be obtained as the intersection in C2 of the unit 3-sphere S3 with the complex plane curve of zeroes of the complex polynomial z2 + w3 (a cuspidal cubic).

If one end of a tape or belt is turned over three times and then pasted to the other, a trefoil knot results.[1] 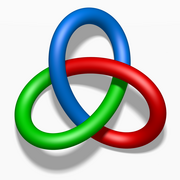 The trefoil knot is tricolorable. 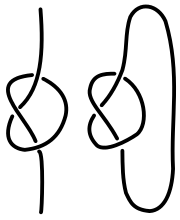 Overhand knot becomes a trefoil knot by joining the ends.

The trefoil can be described as the (2,3)-torus knot. It is also the knot obtained by closing the braid σ13.

The trefoil is an alternating knot. However, it is not a slice knot, meaning that it does not bound a smooth 2-dimensional disk in the 4-dimensional ball; one way to prove this is to note that its signature is not zero. Another proof is that its Alexander polynomial does not satisfy the Fox-Milnor condition.

The trefoil is a fibered knot, meaning that its complement in

is a fiber bundle over the circle

. In the model of the trefoil as the set of pairs

of complex numbers such that

, this fiber bundle has the Milnor map

as its fibration, and a once-punctured torus as its fiber surface. Since the knot complement is Seifert fibred with boundary, it has a horizontal incompressible surface -- this is also the fiber of the Milnor map.

The Alexander polynomial of the trefoil knot is

and the Conway polynomial is

The Jones polynomial is

and the Kauffman polynomial of the trefoil is

The knot group of the trefoil is given by the presentation

This group is isomorphic to the braid group with three strands.

Trefoils in religion and culture

As the simplest nontrivial knot, the trefoil is a common motif in iconography and the visual arts. For example, the common form of the triquetra symbol is a trefoil, as are some versions of the Germanic Valknut.