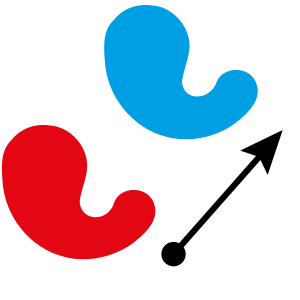 A translation moves every point of a figure or a space by the same amount in a given direction.

In Euclidean geometry, a translation is a function that moves every point a constant distance in a specified direction. (Also in Euclidean geometry a transformation is a one to one correspondence between two sets of points or a mapping from one plane to another.(master math Geometry, Debra Anne, Ross)[1] A translation can be described as a rigid motion: other rigid motions include rotations and reflections. A translation can also be interpreted as the addition of a constant vector to every point, or as shifting the origin of the coordinate system. A translation operator is an operator

A translation is an affine transformation with no fixed points. Matrix multiplications always have the origin as a fixed point. Nevertheless, there is a common workaround using homogeneous coordinates to represent a translation of a vector space with matrix multiplication: Write the 3-dimensional vector w = (wx, wy, wz) using 4 homogeneous coordinates as w = (wx, wy, wz, 1).[2]

To translate an object by a vector v, each homogeneous vector p (written in homogeneous coordinates) can be multiplied by this translation matrix:

As shown below, the multiplication will give the expected result:

The inverse of a translation matrix can be obtained by reversing the direction of the vector:

Similarly, the product of translation matrices is given by adding the vectors:

In physics, translation (Translational motion) is movement that changes the position of an object, as opposed to rotation. For example, according to Whittaker:[3]

If a body is moved from one position to another, and if the lines joining the initial and final points of each of the points of the body are a set of parallel straight lines of length ℓ, so that the orientation of the body in space is unaltered, the displacement is called a translation parallel to the direction of the lines, through a distance ℓ.

— E.T. Whittaker: A Treatise on the Analytical Dynamics of Particles and Rigid Bodies, p. 1

A translation is the operation changing the positions of all points (x, y, z) of an object according to the formula

is the same vector for each point of the object. The translation vector

When considering spacetime, a change of time coordinate is considered to be a translation. For example, the Galilean group and the Poincaré group include translations with respect to time.