is a column vector with n entries, then

Finding the matrix of a transformation

If one has a linear transformation

in functional form, it is easy to determine the transformation matrix A by transforming each of the vectors of the standard basis by T, then inserting the result into the columns of a matrix. In other words,

For example, the function

is a linear transformation. Applying the above process (suppose that n = 2 in this case) reveals that

It must be noted that the matrix representation of vectors and operators depends on the chosen basis; a similar matrix will result from an alternate basis. Nevertheless, the method to find the components remains the same.

To elaborate, vector v can be represented in basis vectors,

Now, express the result of the transformation matrix A upon

, in the given basis:

, and observing the response vector

. This equation defines the wanted elements,

Yet, there is a special basis for an operator in which the components form a diagonal matrix and, thus, multiplication complexity reduces to n. Being diagonal means that all coefficients

are zeros leaving only one term in the sum

above. The surviving diagonal elements,

, are known as eigenvalues and designated with

in the defining equation, which reduces to

. The resulting equation is known as eigenvalue equation.[3] The eigenvectors and eigenvalues are derived from it via the characteristic polynomial.

With diagonalization, it is often possible to translate to and from eigenbases.

Most common geometric transformations that keep the origin fixed are linear, including rotation, scaling, shearing, reflection, and orthogonal projection; if an affine transformation is not a pure translation it keeps some point fixed, and that point can be chosen as origin to make the transformation linear. In two dimensions, linear transformations can be represented using a 2×2 transformation matrix.

. Written in matrix form, this becomes:[4]

Similarly, for a rotation counter-clockwise about the origin, the functional form is

and the matrix form is:

For shear mapping (visually similar to slanting), there are two possibilities.

A shear parallel to the x axis has

. Written in matrix form, this becomes:

A shear parallel to the y axis has

, which has matrix form:

To reflect a vector about a line that goes through the origin, let

be a vector in the direction of the line:

To project a vector orthogonally onto a line that goes through the origin, let

be a vector in the direction of the line. Then use the transformation matrix:

As with reflections, the orthogonal projection onto a line that does not pass through the origin is an affine, not linear, transformation.

Parallel projections are also linear transformations and can be represented simply by a matrix. However, perspective projections are not, and to represent these with a matrix, homogeneous coordinates must be used.

The matrix to rotate an angle θ about the axis defined by unit vector (l,m,n) is[5]

To reflect a point through a plane

(which goes through the origin), one can use

is the 3x3 identity matrix and

is the three-dimensional unit vector for the vector normal of the plane. If the L2 norm of

is unity, the transformation matrix can be expressed as:

Note that these are particular cases of a Householder reflection in two and three dimensions. A reflection about a line or plane that does not go through the origin is not a linear transformation; it is an affine transformation.

Composition is accomplished by matrix multiplication. If A and B are the matrices of two linear transformations, then the effect of applying first A and then B to a vector x is given by:

(This is called the associative property.) In other words, the matrix of the combined transformation A followed by B is simply the product of the individual matrices. Note that the multiplication is done in the opposite order from the English sentence: the matrix of "A followed by B" is BA, not AB.

Other kinds of transformations 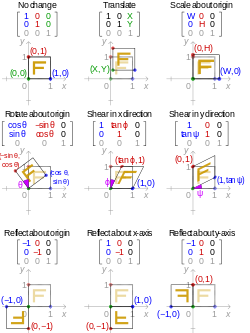 Effect of applying various 2D affine transformation matrices on a unit square. Note that the reflection matrices are special cases of the scaling matrix.

To represent affine transformations with matrices, we can use homogeneous coordinates. This means representing a 2-vector (x, y) as a 3-vector (x, y, 1), and similarly for higher dimensions. Using this system, translation can be expressed with matrix multiplication. The functional form

When using affine transformations, the homogeneous component of a coordinate vector (normally called w) will never be altered. One can therefore safely assume that it is always 1 and ignore it. However, this is not true when using perspective projections.

The simplest perspective projection uses the origin as the center of projection, and z = 1 as the image plane. The functional form of this transformation is then

. We can express this in homogeneous coordinates as:

After carrying out the matrix multiplication, the homogeneous component wc will, in general, not be equal to 1. Therefore, to map back into the real plane we must perform the homogeneous divide or perspective divide by dividing each component by wc:

More complicated perspective projections can be composed by combining this one with rotations, scales, translations, and shears to move the image plane and center of projection wherever they are desired.