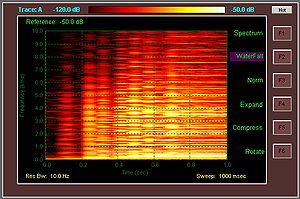 Spectrogram of the first second of an E9 chord played on a Fender Stratocaster guitar with noiseless pickups. Below is the E9 chord audio: File:9577 Guitarz1970 Clean E9 Guitar Chord (Mike Tribulas).ogg

Tone quality and color are synonyms for timbre, as well as the "texture attributed to a single instrument". Hermann von Helmholtz used the German Klangfarbe (tone color), and John Tyndall proposed an English translation, clangtint. But both terms were disapproved of by Alexander Ellis, who also discredits register and color for their pre-existing English meanings Template:Harv.

The sound of a musical instrument may be described with such words as bright, dark, warm, harsh, and other terms. There are also colors of noise, such as pink and white.

In visual representations of sound, timbre corresponds to the shape of the image Template:Harv.

The American Standards Association definition 12.9 of timbre describes it as "that attribute of sensation in terms of which a listener can judge that two sounds having the same loudness and pitch are dissimilar", adding, "Timbre depends primarily upon the spectrum of the stimulus, but it also depends upon the waveform, the sound pressure, the frequency location of the spectrum, and the temporal characteristics of the stimulus" Template:Harv.

Many commentators have attempted to decompose timbre into component attributes. For example, J. F. Schouten (1968, 42) describes the, "elusive attributes of timbre", as "determined by at least five major acoustic parameters", which Robert Template:Harvtxt finds, "scaled to the concerns of much contemporary music":

Template:Harvtxt gives a table of subjective experiences and related physical phenomena based on Schouten's five attributes: 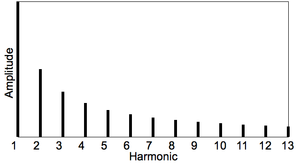 When the tuning note in an orchestra or concert band is played, the sound is a combination of 440 Hz, 880 Hz, 1320 Hz, 1760 Hz and so on. Each instrument in the orchestra or concert band produces a different combination of these frequencies, as well as harmonics and overtones. The sound waves of the different frequencies overlap and combine, and the balance of these amplitudes is a major factor in the characteristic sound of each instrument. 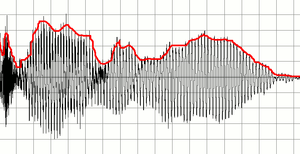 A signal and its envelope marked with red

The timbre of a sound is also greatly affected by the following aspects of its envelope: attack time and characteristics, decay, sustain, release (ADSR envelope) and transients. Thus these are all common controls on synthesizers. For instance, if one takes away the attack from the sound of a piano or trumpet, it becomes more difficult to identify the sound correctly, since the sound of the hammer hitting the strings or the first blast of the player's lips are highly characteristic of those instruments. The envelope is the overall amplitude structure of a sound, so called because the sound just "fits" inside its envelope: what this means should be clear from a time-domain display of almost any interesting sound, zoomed out enough that the entire waveform is visible.

The music of Debussy, composed during the last decades of the nineteenth and the first decades of the twentieth centuries, has been credited with elevating the role of timbre in music: "To a marked degree the music of Debussy elevates timbre to an unprecedented structural status; already in Prélude à l'après-midi d'un faune the color of flute and harp functions referentially" (Template:Harvnb, Template:Page needed).

Often, listeners can identify an instrument, even at different pitches and loudness, in different environments, and with different players. In the case of the clarinet, acoustic analysis shows waveforms irregular enough to suggest three instruments rather than one. David Template:Harvtxt suggests that this implies that, "Certain strong regularities in the acoustic waveform of the above instruments must exist which are invariant with respect to the above variables." However, Robert Erickson argues that there are few regularities and they do not explain our "...powers of recognition and identification." He suggests borrowing the concept of subjective constancy from studies of vision and visual perception Template:Harv.

Psychoacoustic experiments from the 1960s onwards tried to elucidate the nature of timbre. One method involves playing pairs of sounds to listeners, then using a multidimensional scaling algorithm to aggregate their dissimilarity judgments into a timbre space. The most consistent outcomes from such experiments are that brightness or spectral energy distribution Template:Harv, and the bite, or rate and synchronicity Template:Harv and rise time Template:Harv, of the attack are important factors.