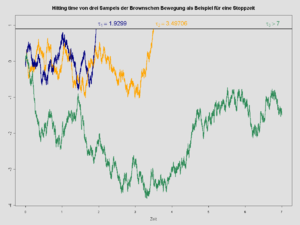 Example of a stopping time: a hitting time of Brownian motion. The process starts at 0 and is stopped as soon as it hits 1.

In probability theory, in particular in the study of stochastic processes, a stopping time (also Markov time) is a specific type of “random time”: a random variable whose value is interpreted as the time at which a given stochastic process exhibits a certain behavior of interest. A stopping time is often defined by a stopping rule, a mechanism for deciding whether to continue or stop a process on the basis of the present position and past events, and which will almost always lead to a decision to stop at some finite time.

Stopping times occur in decision theory, and the optional stopping theorem is an important result in this context. Stopping times are also frequently applied in mathematical proofs to “tame the continuum of time”, as Chung put it in his book (1982).

Another, more general definition is used for continuous-time stochastic processes and may be given in terms of a filtration: Let (I, ≤) be an ordered index set (often I = [0, ∞) or a compact subset thereof, thought of as the set of possible "times"), and let

for all t in I. Often, to avoid confusion, we call it a

-stopping time and explicitly specify the filtration. Speaking concretely, for τ to be a stopping time, it should be possible to decide whether or not

has occurred on the basis of the knowledge of

To illustrate some examples of random times that are stopping rules and some that are not, consider a gambler playing roulette with a typical house edge, starting with $100 and betting $1 on red in each game:

To illustrate the more general definition of stopping time, consider Brownian motion, which is a stochastic process

is a random variable defined on the probability space

. We define a filtration on this probability space by letting

is a Borel set. Intuitively, an event E is in

if and only if we can determine whether E is true or false just by observing the Brownian motion from time 0 to time t.

Stopping times are frequently used to generalize certain properties of stochastic processes to situations in which the required property is satisfied in only a local sense. First, if X is a process and τ is a stopping time, then Xτ is used to denote the process X stopped at time τ.

Then, X is said to locally satisfy some property P if there exists a sequence of stopping times τn, which increases to infinity and for which the processes

satisfy property P. Common examples, with time index set I = [0, ∞), are as follows:

Local Martingale Process. A process X is a local martingale if it is càdlàg and there exists a sequence of stopping times τn increasing to infinity, such that

is a martingale for each n.

Locally Integrable Process. A non-negative and increasing process X is locally integrable if there exists a sequence of stopping times τn increasing to infinity, such that

Stopping times, with time index set I = [0,∞), are often divided into one of several types depending on whether it is possible to predict when they are about to occur.