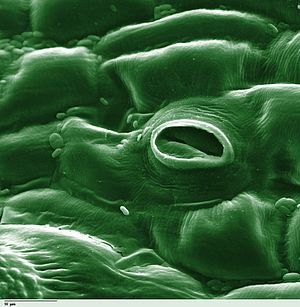 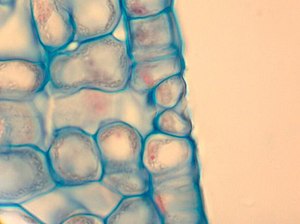 A stoma in cross section

The underside of a leaf. In this species (Tradescantia zebrina) the stomata appear green (due to chlorophyll) while the epidermal cells appear red due to additional pigmentation.

In botany, a stoma (plural stomata) (occasionally called a stomate, plural stomates)[1] (from Greek στόμα, "mouth"[2]) is a pore, found in the epidermis of leaves, stems and other organs that is used to control gas exchange. The pore is bordered by a pair of specialized parenchyma cells known as guard cells that are responsible for regulating the size of the opening. The term is also used collectively to refer to an entire stomatal complex, both the pore itself and its accompanying guard cells.[3] Air containing carbon dioxide and oxygen enters the plant through these openings and is used in photosynthesis in the mesophyll cells (parenchyma cells with chloroplasts) and respiration, respectively. Oxygen produced as a by-product of photosynthesis diffuses out to the atmosphere through these same openings. Also, water vapor is released into the atmosphere through these pores in a process called transpiration.

This is an electron micrograph of a stoma from a Brassica chinensis (Bok Choy) leaf.

Carbon dioxide, a key reactant in photosynthesis, is present in the atmosphere at a concentration of about 390 ppm (as of December 2011). Most plants require the stomata to be open during daytime. The problem is that the air spaces in the leaf are saturated with water vapour, which exits the leaf through the stomata (this is known as transpiration). Therefore, plants cannot gain carbon dioxide without simultaneously losing water vapour.[4]

Ordinarily, carbon dioxide is fixed to ribulose-1,5-bisphosphate (RuBP) by the enzyme RuBisCO in mesophyll cells exposed directly to the air spaces inside the leaf. This exacerbates the transpiration problem for two reasons: first, RuBisCo has a relatively low affinity for carbon dioxide, and second, it fixes oxygen to RuBP, wasting energy and carbon in a process called photorespiration. For both of these reasons, RuBisCo needs high carbon dioxide concentrations, which means wide stomatal apertures and, as a consequence, high water loss.

Narrower stomatal apertures can be used in conjunction with an intermediary molecule with a high carbon dioxide affinity, PEPcase (Phosphoenolpyruvate carboxylase). Retrieving the products of carbon fixation from PEPCase is in an energy-intensive process, however. As a result, the PEPCase alternative is preferable only where water is limiting but light is plentiful, or where high temperatures increase the solubility of oxygen relative to that of carbon dioxide, magnifying RuBisCo's oxygenation problem.

A group of mostly desert plants called "CAM" plants (Crassulacean acid metabolism, after the family Crassulaceae, which includes the species in which the CAM process was first discovered) open their stomata at night (when water evaporates more slowly from leaves for a given degree of stomatal opening), use PEPcarboxylase to fix carbon dioxide and store the products in large vacuoles. The following day, they close their stomata and release the carbon dioxide fixed the previous night into the presence of RuBisCO. This saturates RuBisCO with carbon dioxide, allowing minimal photorespiration. This approach, however, is severely limited by the capacity to store fixed carbon in the vacuoles, so it is preferable only when water is severely limiting.

However, most plants do not have the aforementioned facility and must therefore open and close their stomata during the daytime in response to changing conditions, such as light intensity, humidity, and carbon dioxide concentration. It is not entirely certain how these responses work. However, the basic mechanism involves regulation of osmotic pressure.

When conditions are conducive to stomatal opening (e.g., high light intensity and high humidity), a proton pump drives protons (H+) from the guard cells. This means that the cells' electrical potential becomes increasingly negative. The negative potential opens potassium voltage-gated channels and so an uptake of potassium ions (K+) occurs. To maintain this internal negative voltage so that entry of potassium ions does not stop, negative ions balance the influx of potassium. In some cases, chloride ions enter, while in other plants the organic ion malate is produced in guard cells. This increase in solute concentration lowers the water potential inside the cell, which results in the diffusion of water into the cell through osmosis. This increases the cell's volume and turgor pressure. Then, because of rings of cellulose microfibrils that prevent the width of the guard cells from swelling, and thus only allow the extra turgor pressure to elongate the guard cells, whose ends are held firmly in place by surrounding epidermal cells, the two guard cells lengthen by bowing apart from one another, creating an open pore through which gas can move.[5]

When the roots begin to sense a water shortage in the soil, abscisic acid (ABA) is released.[6] ABA binds to receptor proteins in the guard cells' plasma membrane and cytosol, which first raises the pH of the cytosol of the cells and cause the concentration of free Ca2+ to increase in the cytosol due to influx from outside the cell and release of Ca2+ from internal stores such as the endoplasmic reticulum and vacuoles.[7] This causes the chloride (Cl-) and inorganic ions to exit the cells. Second, this stops the uptake of any further K+ into the cells and, subsequently, the loss of K+. The loss of these solutes causes an increase in water potential, which results in the diffusion of water back out of the cell by osmosis. This makes the cell plasmolysed, which results in the closing of the stomatal pores.

Guard cells have more chloroplasts than the other epidermal cells from which guard cells are derived. Their function is controversial.[8][9]

The degree of stomatal resistance can be determined by measuring leaf gas exchange of a leaf. The transpiration rate is dependent on the diffusion resistance provided by the stomatal pores, and also on the humidity gradient between the leaf's internal air spaces and the outside air. Stomatal resistance (or its inverse, stomatal conductance) can therefore be calculated from the transpiration rate and humidity gradient. This allows scientists to investigate how stomata respond to changes in environmental conditions, such as light intensity and concentrations of gases such as water vapor, carbon dioxide, and ozone.[10] Evaporation (E) can be calculated as;[11]

where ei and ea are the partial pressures of water in the leaf and in the ambient air, respectively, P is atmospheric pressure, and r is stomatal resistance. The inverse of r is conductance to water vapor (g), so the equation can be rearranged to;[11]

Photosynthetic CO2 assimilation (A) can be calculated from

where Ca and Ci are the atmospheric and sub-stomatal partial pressures of CO2, respectively. The rate of evaporation from a leaf can be determined using a photosynthesis system. These scientific instruments measure the amount of water vapour leaving the leaf and the vapor pressure of the ambient air. Photosynthetic systems may calculate water use efficiency (A/E), g, intrinsic water use efficiency (A/g), and Ci. These scientific instruments are commonly used by plant physiologists to measure CO2 uptake and thus measure photosynthetic rate.[12] [13]

Response of Stomata to Environmental Factors

Photosynthesis, plant water transport (xylem) and gas exchange are regulated by stomatal function which is important in the functioning of plants.[14] Stomatal density and aperture (length of stomata) varies under a number of environmental factors such as atmospheric CO2 concentration, light intensity, air temperature and photoperiod (daytime duration). [15][16]

Decreasing stomatal density is one way plants have responded to the increase in concentration of atmospheric CO2 ([CO2]atm).[17] Although changes in [CO2]atm response is the least understood mechanistically, this stomatal response has begun to plateau where it is soon expected to impact transpiration and photosynthesis processes in plants.[14][18]

The gene HIC (high carbon dioxide) encodes a negative regulator for the development of stomata in plants.[19] Research into the HIC gene using Arabidopsis thaliana found no increase of stomatal development in the dominant allele, but in the ‘wild type’ recessive allele showed a large increase, both in response to rising CO2 levels in the atmosphere.[19] These studies imply the plants response to changing CO2 levels is largely controlled by genetics.

In the face of ecological contingencies such as increasing temperatures, changes in rainfall patterns, long term climate change, and biotic influences of human management interventions, it is expected to reduce the production and quality of food and have a negative impact on agricultural production.[16][17]

The CO2 fertiliser effect has been greatly overestimated during Free-Air Carbon dioxide Enrichment (FACE) experiments where results show increased CO2 levels in the atmosphere enhances photosynthesis, reduce transpiration, and increase water use efficiency (WUE).[17] Increased biomass is one of the effects with simulations from experiments predicting a 5–20% increase in crop yields at 550 ppm of CO2.[20] Rates of leaf photosynthesis were shown to increase by 30-50% in C3 plants, and 10-25% in C4 under doubled CO2 levels.[20] The existence of a feedback mechanism results a phenotypic plasticity in response to [CO2]atm that may have been an adaptive trait in the evolution of plant respiration and function.[14][16]

Predicting how stomata performs during adaptation is useful for understanding the productivity of plant systems for both natural and agricultural systems.[15] Plant breeders and farmers are beginning to work together using evolutionary and participatory plant breeding to find the best suited species such as heat and drought resistant crop varieties that could naturally evolve to the change in the face of food security challenges.[17]

The fossil record has little to say about the evolution of stomata.[21] They may have evolved by the modification of conceptacles from plants' alga-like ancestors.[22] It is clear, however, that the evolution of stomata must have happened at the same time as the waxy cuticle was evolving – these two traits together constituted a major advantage for early terrestrial plants.

There are three major epidermal cell types which all ultimately derive from the L1 tissue layer of the shoot apical meristem, called protodermal cells: trichomes, pavement cells and guard cells, all of which are arranged in a non-random fashion.

An asymmetrical cell division occurs in protodermal cells resulting in one large cell that is fated to become a pavement cell and a smaller cell called a meristemoid that will eventually differentiate into the guard cells that surround a stoma. This meristemoid then divides asymmetrically one to three times before differentiating into a guard mother cell. The guard mother cell then makes one symmetrical division, which forms a pair of guard cells.[23]

Stomata are an obvious hole in the leaf by which, as was presumed for a while, pathogens can enter unchallenged. However, it has been recently shown that stomata do in fact sense the presence of some, if not all, pathogens. However, with the virulent bacteria applied to Arabidopsis plant leaves in the experiment, the bacteria released the chemical coronatine, which forced the stomata open again within a few hours.[24]