Modern star-polygon names combine a numeral prefix, such as penta-, with the Greek suffix -gram (in this case generating the word pentagram). The prefix is normally a Greek cardinal, but synonyms using other prefixes exist. For example, a nine-pointed polygon or enneagram is also known as a nonagram, using the ordinal nona from Latin.

Although this prefix+suffix formula can generate or find star-polygon names, it does not necessarily reflect each word's history. For example, pentagram derives from pentagrammos / pentegrammos ("five lines") whose -grammos derives from grammē meaning "line". The -gram suffix, however, derives from gramma meaning "to write". Gramma and grammē do however resemble each other closely in sound, writing (γράμμα, γραμμή) and meaning ("written character, letter, that which is drawn", "stroke or line of a pen,[2]") and are possibly cognates.

In geometry, a "regular star polygon" is a self-intersecting, equilateral equiangular polygon, created by connecting one vertex of a simple, regular, p-sided polygon to another, non-adjacent vertex and continuing the process until the original vertex is reached again.[3] Alternatively for integers p and q, it can be considered as being constructed by connecting every qth point out of p points regularly spaced in a circular placement.[4] For instance, in a regular pentagon, a five-pointed star can be obtained by drawing a line from the first to the third vertex, from the third vertex to the fifth vertex, from the fifth vertex to the second vertex, from the second vertex to the fourth vertex, and from the fourth vertex to the first vertex. The notation for such a polygon is {p/q} (see Schläfli symbol), which is equal to {p/p-q}. Regular star polygons will be produced when p and q are relatively prime (they share no factors). A regular star polygon can also be represented as a sequence of stellations of a convex regular core polygon. Regular star polygons were first studied systematically by Thomas Bradwardine.

If the number of sides n is divisible by m, the star polygon obtained will be a regular polygon with n/m sides. A new figure is obtained by rotating these regular n/m-gons one vertex to the left on the original polygon until the number of vertices rotated equals n/m minus one, and combining these figures. An extreme case of this is where n/m is 2, producing a figure consisting of n/2 straight line segments; this is called a "degenerate star polygon".

In other cases where n and m have a common factor, a star polygon for a lower n is obtained, and rotated versions can be combined. These figures are called "star figures" or "improper star polygons" or "compound polygons". The same notation {n/m} is often used for them, although authorities such as Grünbaum (1994) regard (with some justification) the form k{n} as being more correct, where usually k = m.

A further complication comes when we compound two or more star polygons, as for example two pentagrams, differing by a rotation of 36°, inscribed in a decagon. This is correctly written in the form k{n/m}, as 2{5/2}, rather than the commonly used {10/4}.

A six-pointed star, like a hexagon, can be created using a compass and a straight edge:

of the finite group

The symmetry group of {n/k} is dihedral group Dn of order 2n, independent of k. 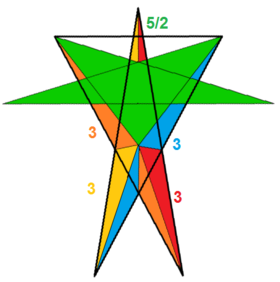 The white line in this graph is an irregular pentagonal cyclic polygon, defining the a vertex figure for the great retrosnub icosidodecahedron. The edge lengths are defined by the distance between alternate vertices in the faces of the uniform polyhedron.

The final stellation of the icosahedron can be seen as a polyhedron with irregular {9/4} star polygon faces with Dih3 dihedral symmetry.

The unicursal hexagram is another example of a cyclic irregular star polygon, containing Dih2 dihedral symmetry.

Star polygons leave an ambiguity of interpretation for interiors. This diagram demonstrates three interpretations of a pentagram.

What is the area inside the pentagram? Each interpretation leads to a different answer.

Example interpretations of a star prism

Star polygons in art and culture

Star polygons feature prominently in art and culture. Such polygons may or may not be regular but they are always highly symmetrical. Examples include: