In the simplest case β = 0, the characteristic function is just a stretched exponential function; the distribution is symmetric about μ and is referred to as a (Lévy) symmetric alpha-stable distribution, often abbreviated SαS.

The above definition is only one of the parameterizations in use for stable distributions; it is the most common but is not continuous in the parameters. For example, for the case α = 1 we could replace Φ by:[7]

The pdf for all α will then have the following standardization property:

denotes the density of X and Y is the sum of independent copies of X:

then Y has the density

where Γ is the Gamma function (except that when α < 1 and β = ±1, the tail vanishes to the left or right, resp., of μ). This "heavy tail" behavior causes the variance of stable distributions to be infinite for all α < 2. This property is illustrated in the log-log plots below.

Since Φ is not a function of the μ, c or β variables it follows that these parameters for the convolved function are given by:

In each case, it can be shown that the resulting parameters lie within the required intervals for a stable distribution.

as the number of summands grows.[8][11] If α>2 then the sum converges to a stable distribution with stability parameter equal to 2, i.e. a Gaussian distribution.[12] 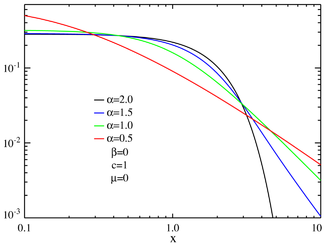 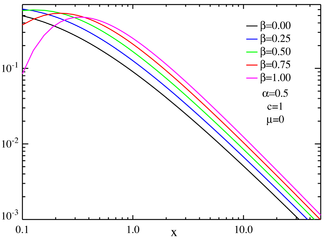 There is no general analytic solution for the form of p(x). There are, however three special cases which can be expressed in terms of elementary functions as can be seen by inspection of the characteristic function.

Some of the special cases are known by particular names:

The stable distribution can be restated as the real part of a simpler integral:[13]

Expressing the second exponential as a Taylor series, we have:

. Reversing the order of integration and summation, and carrying out the integration yields:

which will be valid for x ≠ μ and will converge for appropriate values of the parameters. (Note that the n = 0 term which yields a delta function in x−μ has therefore been dropped.) Expressing the first exponential as a series will yield another series in positive powers of x−μ which is generally less useful.

Stable distributions owe their importance in both theory and practice to the generalization of the central limit theorem to random variables without second (and possibly first) order moments and the accompanying self-similarity of the stable family. It was the seeming departure from normality along with the demand for a self-similar model for financial data (i.e. the shape of the distribution for yearly asset price changes should resemble that of the constituent daily or monthly price changes) that led Benoît Mandelbrot to propose that cotton prices follow an alpha-stable distribution with α equal to 1.7.[16] Lévy distributions are frequently found in analysis of critical behavior and financial data.[8]

They are also found in spectroscopy as a general expression for a quasistatically pressure broadened spectral line.[13]

Lévy distribution of solar flare waiting time events (time between flare events) was demonstrated for CGRO BATSE hard x-ray solar flares December 2001. Analysis of the Lévy statistical signature revealed that two different memory signatures were evident; one related to the solar cycle and the second whose origin appears to be associated with a localized or combination of localized solar active region effects.[18]