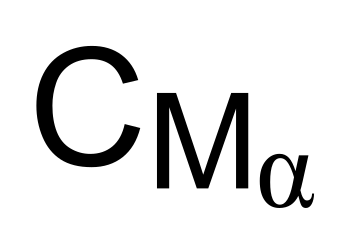 A Stability Derivative. This is an example of a common shorthand notation for stability derivatives. The "M" indicates it is a measure of pitching moment changes. The

indicates the changes are in response to changes in angle of attack. This stability derivative is pronounced "see-em-alpha". It is one measure of how strongly an aircraft wants to fly "nose first", which is clearly very important.

Stability Derivatives, and also Control Derivatives, are measures of how particular forces and moments on an aircraft change as other parameters related to stability change (parameters such as airspeed, altitude, angle of attack, etc.). For a defined "trim" flight condition, changes and oscillations occur in these parameters. Equations of motion are used to analyze these changes and oscillations. Stability and control derivatives are used to linearize (simplify) these equations of motion so the stability of the vehicle can be more readily analyzed.

Stability and control derivatives change as flight conditions change. The collection of stability and control derivatives as they change over a range of flight conditions is called an Aero Model. Aero models are used in engineering flight simulators to analyze stability, and in real-time flight simulators for training and entertainment.

Stability and control derivatives change as flight conditions change. That is, the forces and moments on the vehicle are seldom simple (linear) functions of its states. Because of this, the dynamics of atmospheric flight vehicles can be difficult to analyze. The following are two methods used to tackle this complexity.

Use in flight simulators

In addition to engineering simulators, aero models are often used in real time flight simulators for home use and professional flight training.

Names for the axes of vehicles

Air vehicles use a coordinate system of axes to help name important parameters used in the analysis of stability. All the axes run through the center of gravity (called the "CG"):

Two slightly different alignments of these axes are used depending on the situation: "Body-fixed Axes", and "Stability Axes".

Body-fixed axes, or "Body Axes", are defined and fixed relative to the body of the vehicle.:[1]

Names for Forces, Moments, and Velocities

Forces and velocities along each of the axes

Forces on the vehicle along the body axes are called "Body-axis Forces":

Moments and angular rates around each of the axes

The use of stability derivatives is most conveniently demonstrated with missile or rocket configurations, because these exhibit greater symmetry than aeroplanes, and the equations of motion are correspondingly simpler. If it is assumed that the vehicle is roll-controlled, the pitch and yaw motions may be treated in isolation. It is common practice to consider the yaw plane, so that only 2D motion need be considered. Furthermore, it is assumed that thrust equals drag, and the longitudinal equation of motion may be ignored.

The body is oriented at angle

(psi) with respect to inertial axes. The body is oriented at an angle

(beta) with respect to the velocity vector, so that the components of velocity in body axes are:

where U is the speed.

The aerodynamic forces are generated with respect to body axes, which is not an inertial frame. In order to calculate the motion, the forces must be referred to inertial axes. This requires the body components of velocity to be resolved through the heading angle

where m is the mass. Equating the inertial values of acceleration and force, and resolving back into body axes, yields the equations of motion:

, is a small quantity, so the small perturbation equations of motion become:

The first resembles the usual expression of Newton's Second Law, whilst the second is essentially the centrifugal acceleration. The equation of motion governing the rotation of the body is derived from the time derivative of angular momentum:

where C is the moment of inertia about the yaw axis. Assuming constant speed, there are only two state variables;

, which will be written more compactly as the yaw rate r. There is one force and one moment, which for a given flight condition will each be functions of

, r and their time derivatives. For typical missile configurations the forces and moments depend, in the short term, on

and r. The forces may be expressed in the form:

is the force corresponding to the equilibrium condition (usually called the trim) whose stability is being investigated. It is common practice to employ a shorthand:

and all similar terms characterising the increments in forces and moments due to increments in the state variables are called stability derivatives. Typically,

is insignificant for missile configurations, so the equations of motion reduce to:

Each stability derivative is determined by the position, size, shape and orientation of the missile components. In aircraft, the directional stability determines such features as dihedral of the main planes, size of fin and area of tailplane, but the large number of important stability derivatives involved precludes a detailed discussion within this article. The missile is characterised by only three stability derivatives, and hence provides a useful introduction to the more complex aeroplane dynamics.

, a body at an angle of attack

generates a lift force in the opposite direction to the motion of the body. For this reason

At low angles of attack, the lift is generated primarily by the wings, fins and the nose region of the body. The total lift acts at a distance

is the static margin and must be negative for longitudinal static stability. Alternatively, positive angle of attack must generate positive yawing moment on a statically stable missile, i.e.

must be positive. It is common practice to design manoeuvrable missiles with near zero static margin (i.e. neutral static stability).

The need for positive

explains why arrows and darts have flights and unguided rockets have fins.

The effect of angular velocity is mainly to decrease the nose lift and increase the tail lift, both of which act in a sense to oppose the rotation.

is therefore always negative. There is a contribution from the wing, but since missiles tend to have small static margins (typically less than a calibre), this is usually small. Also the fin contribution is greater than that of the nose, so there is a net force

, but this is usually insignificant compared with

and is usually ignored.

The qualitative behavior of this equation is considered in the article on directional stability. Since

are both negative, the damping is positive. The stiffness does not only depend on the static stability term

, it also contains a term which effectively determines the angle of attack due to the body rotation. The distance of the center of lift, including this term, ahead of the centre of gravity is called the maneuver margin. It must be negative for stability.

This damped oscillation in angle of attack and yaw rate, following a disturbance, is called the 'weathercock' mode, after the tendency of a weathercock to point into wind.

The state variables were chosen to be the angle of attack

and the yaw rate r, and have omitted the speed perturbation u, together with the associated derivatives e.g.

. This may appear arbitrary. However, since the timescale of the speed variation is much greater than that of the variation in angle of attack, its effects are negligible as far as the directional stability of the vehicle is concerned. Similarly, the effect of roll on yawing motion was also ignored, because missiles generally have low aspect ratio configurations and the roll inertia is much less than the yaw inertia, consequently the roll loop is expected to be much faster than the yaw response, and is ignored. These simplifications of the problem based on a priori knowledge, represent an engineer's approach. Mathematicians prefer to keep the problem as general as possible and only simplify it at the end of the analysis, if at all.

Aircraft dynamics is more complex than missile dynamics, mainly because the simplifications, such as separation of fast and slow modes, and the similarity between pitch and yaw motions, are not obvious from the equations of motion, and are consequently deferred until a late stage of the analysis. Subsonic transport aircraft have high aspect ratio configurations, so that yaw and roll cannot be treated as decoupled. However, this is merely a matter of degree; the basic ideas needed to understand aircraft dynamics are covered in this simpler analysis of missile motion.

Deflection of control surfaces modifies the pressure distribution over the vehicle, and these are dealt with by including perturbations in forces and moments due to control deflection. The fin deflection is normally denoted

(zeta). Including these terms, the equations of motion become:

Including the control derivatives enables the response of the vehicle to be studied, and the equations of motion used to design the autopilot.