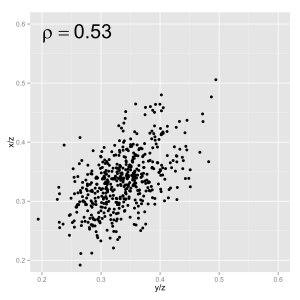 An illustration of spurious correlation, this figure shows 500 observations of x/z plotted against y/z. The sample correlation is 0.53, even though x, y, and z are statistically independent of each other (i.e., the pairwise correlations between each of them are zero).

This figure shows the 500 observations of y/z plotted against x/z from above, this time with the z-values on a colour scale to highlight how dividing through by z induces spurious correlation.

Spurious correlation is a term coined by Karl Pearson to describe the correlation between ratios of absolute measurements that arises as a consequence of using ratios, rather than because of any actual correlations between the measurements.[1]

The phenomenon of spurious correlation is one of the main motives for the field of compositional data analysis which deals with the analysis of variables that carry only relative information, such as proportions, percentages and parts-per-million.[2][3]

Pearson's definition of spurious correlation is distinct from (and should not be confused with) misconceptions about correlation and causality, or the term spurious relationship.

Select three numbers within certain ranges at random, say x, y, z, these will be pair and pair uncorrelated. Form the proper fractions x/y and z/y for each triplet, and correlation will be found between these indices.

The upper scatter plot on the right illustrates this example using 500 observations of x, y, and z. Variables x, y and z are drawn from normal distributions with means 10, 10, and 30, respectively, and standard deviations 1, 1, and 3 respectively, i.e.,

Even though x, y, and z are statistically independent (i.e., pairwise uncorrelated), the ratios x/z and y/z have a sample correlation of 0.53. This is because of the common divisor (z) and can be better understood if we colour the points in the scatter plot by the z-value. Trios of (x, y, z) with relatively large z values tend to appear in the bottom left of the plot; trios with relatively small z values tend to appear in the top right.

), i.e., ratios of the absolute measurements

is the coefficient of variation of

the Pearson correlation between

are uncorrelated, giving the spurious correlation:

For the special case in which all coefficients of variation are equal (as is the case in the illustrations at right),

Relevance to biology and other sciences

Pearson was joined by Sir Francis Galton and Walter Frank Raphael Weldon in cautioning scientists to be wary of spurious correlation, especially in biology where it is common to scale or normalize measurements by dividing them by a particular variable or total. The danger he saw was that conclusions would be drawn from correlations that are artifacts of the analysis method, rather than actual “organic” relationships.

However, it would appear that spurious correlation (and its potential to mislead) is not yet widely understood. In 1986 John Aitchison, who pioneered the log-ratio approach to compositional data analysis wrote:[2]

It seems surprising that the warnings of three such eminent statistician-scientists as Pearson, Galton and Weldon should have largely gone unheeded for so long: even today uncritical applications of inappropriate statistical methods to compositional data with consequent dubious inferences are regularly reported.

More recent publications suggest that this lack of awareness prevails, at least in molecular bioscience.[4]