Consider a symmetrical upward dome with a trough circling the bottom. If a ball is put at the very peak of the dome, the system is symmetrical with respect to a rotation around the center axis. But the ball may spontaneously break this symmetry by rolling down the dome into the trough, a point of lowest energy. Afterward, the ball has come to a rest at some fixed point on the perimeter. The dome and the ball retain their individual symmetry, but the system does not.[4]

Most simple phases of matter and phase transitions, like crystals, magnets, and conventional superconductors can be simply understood from the viewpoint of spontaneous symmetry breaking. Notable exceptions include topological phases of matter like the fractional quantum Hall effect.

Spontaneous symmetry breaking simplified: – At high energy levels (left) the ball settles in the center, and the result is symmetrical. At lower energy levels (right), the overall "rules" remain symmetrical, but the "Mexican hat" potential comes into effect: "local" symmetry is inevitably broken since eventually the ball must roll one way (at random) and not another.

In particle physics the force carrier particles are normally specified by field equations with gauge symmetry; their equations predict that certain measurements will be the same at any point in the field. For instance, field equations might predict that the mass of two quarks is constant. Solving the equations to find the mass of each quark might give two solutions. In one solution, quark A is heavier than quark B. In the second solution, quark B is heavier than quark A by the same amount. The symmetry of the equations is not reflected by the individual solutions, but it is reflected by the range of solutions. An actual measurement reflects only one solution, representing a breakdown in the symmetry of the underlying theory. "Hidden" is perhaps a better term than "broken" because the symmetry is always there in these equations. This phenomenon is called spontaneous symmetry breaking because nothing (that we know) breaks the symmetry in the equations.[5]:194–195

Chiral symmetry breaking is an example of spontaneous symmetry breaking affecting the chiral symmetry of the strong interactions in particle physics. It is a property of quantum chromodynamics, the quantum field theory describing these interactions, and is responsible for the bulk of the mass (over 99%) of the nucleons, and thus of all common matter, as it converts very light bound quarks into 100 times heavier constituents of baryons. The approximate Nambu–Goldstone bosons in this spontaneous symmetry breaking process are the pions, whose mass is an order of magnitude lighter than the mass of the nucleons. It served as the prototype and significant ingredient of the Higgs mechanism underlying the electroweak symmetry breaking.

In the standard model of particle physics, spontaneous symmetry breaking of the SU(2) × U(1) gauge symmetry associated with the electro-weak force generates masses for several particles, and separates the electromagnetic and weak forces. The W and Z bosons are the elementary particles that mediate the weak interaction, while the photon mediates the electromagnetic interaction. At energies much greater than 100 GeV all these particles behave in a similar manner. The Weinberg–Salam theory predicts that, at lower energies, this symmetry is broken so that the photon and the massive W and Z bosons emerge.[6] In addition, fermions develop mass consistently.

Superconductivity of metals is a condensed-matter analog of the Higgs phenomena, in which a condensate of Cooper pairs of electrons spontaneously breaks the U(1) gauge "symmetry" associated with light and electromagnetism.

Most phases of matter can be understood through the lens of spontaneous symmetry breaking. For example, crystals are periodic arrays of atoms that are not invariant under all translations (only under a small subset of translations by a lattice vector). Magnets have north and south poles that are oriented in a specific direction, breaking rotational symmetry. In addition to these examples, there are a whole host of other symmetry-breaking phases of matter including nematic phases of liquid crystals, charge- and spin-density waves, superfluids and many others.

The ferromagnet is the canonical system which spontaneously breaks the continuous symmetry of the spins below the Curie temperature and at h = 0, where h is the external magnetic field. Below the Curie temperature the energy of the system is invariant under inversion of the magnetization m(x) such that m(x) = −m(−x). The symmetry is spontaneously broken as h → 0 when the Hamiltonian becomes invariant under the inversion transformation, but the expectation value is not invariant.

Spontaneously, symmetry broken phases of matter are characterized by an order parameter that describes the quantity which breaks the symmetry under consideration. For example, in a magnet, the order parameter is the local magnetization.

Spontaneously breaking of a continuous symmetry is inevitably accompanied by gapless (meaning that these modes do not cost any energy to excite) Nambu–Goldstone modes associated with slow long-wavelength fluctuations of the order parameter. For example, vibrational modes in a crystal, known as phonons, are associated with slow density fluctuations of the crystal's atoms. The associated Goldstone mode for magnets are oscillating waves of spin known as spin-waves. For symmetry-breaking states, whose order parameter is not a conserved quantity, Nambu–Goldstone modes are typically massless and propagate at a constant velocity.

An important theorem, due to Mermin and Wagner, states that, at finite temperature, thermally activated fluctuations of Nambu–Goldstone modes destroy the long-range order, and prevent spontaneous symmetry breaking in one- and two-dimensional systems. Similarly, quantum fluctuations of the order parameter prevent most types of continuous symmetry breaking in one-dimensional systems even at zero temperature (an important exception is ferromagnets, whose order parameter, magnetization, is an exactly conserved quantity and does not have any quantum fluctuations).

Other long-range interacting systems such as cylindrical curved surfaces interacting via the Coulomb potential or Yukawa potential has been shown to break translational and rotational symmetries.[7] It was shown, in the presence of a symmetric Hamiltonian, and in the limit of infinite volume, the system spontaneously adopts a chiral configuration, i.e. breaks mirror plane symmetry.

Dynamical breaking of a gauge symmetry [1] is subtler. In the conventional spontaneous gauge symmetry breaking, there exists an unstable Higgs particle in the theory, which drives the vacuum to a symmetry-broken phase (see e.g. Electroweak interaction). In dynamical gauge symmetry breaking, however, no unstable Higgs particle operates in the theory, but the bound states of the system itself provide the unstable fields that render the phase transition. For example, Bardeen, Hill, and Lindner published a paper which attempts to replace the conventional Higgs mechanism in the standard model, by a DSB that is driven by a bound state of top-antitop quarks (such models, where a composite particle plays the role of the Higgs boson, are often referred to as "Composite Higgs models").[8] Dynamical breaking of gauge symmetries is often due to creation of a fermionic condensate; for example the quark condensate, which is connected to the dynamical breaking of chiral symmetry in quantum chromodynamics. Conventional superconductivity is the paradigmatic example from the condensed matter side, where phonon-mediated attractions lead electrons to become bound in pairs and then condense, thereby breaking the electromagnetic gauge symmetry.

For spontaneous symmetry breaking to occur, there must be a system in which there are several equally likely outcomes. The system as a whole is therefore symmetric with respect to these outcomes. (If we consider any two outcomes, the probability is the same. This contrasts sharply to explicit symmetry breaking.) However, if the system is sampled (i.e. if the system is actually used or interacted with in any way), a specific outcome must occur. Though the system as a whole is symmetric, it is never encountered with this symmetry, but only in one specific asymmetric state. Hence, the symmetry is said to be spontaneously broken in that theory. Nevertheless, the fact that each outcome is equally likely is a reflection of the underlying symmetry, which is thus often dubbed "hidden symmetry", and has crucial formal consequences. (See the article on the Goldstone boson).

When a theory is symmetric with respect to a symmetry group, but requires that one element of the group be distinct, then spontaneous symmetry breaking has occurred. The theory must not dictate which member is distinct, only that one is. From this point on, the theory can be treated as if this element actually is distinct, with the proviso that any results found in this way must be resymmetrized, by taking the average of each of the elements of the group being the distinct one.

The crucial concept in physics theories is the order parameter. If there is a field (often a background field) which acquires an expectation value (not necessarily a vacuum expectation value) which is not invariant under the symmetry in question, we say that the system is in the ordered phase, and the symmetry is spontaneously broken. This is because other subsystems interact with the order parameter, which specifies a "frame of reference" to be measured against. In that case, the vacuum state does not obey the initial symmetry (which would keep it invariant, in the linearly realized Wigner mode in which it would be a singlet), and, instead changes under the (hidden) symmetry, now implemented in the (nonlinear) Nambu–Goldstone mode. Normally, in the absence of the Higgs mechanism, massless Goldstone bosons arise.

The symmetry group can be discrete, such as the space group of a crystal, or continuous (e.g., a Lie group), such as the rotational symmetry of space. However, if the system contains only a single spatial dimension, then only discrete symmetries may be broken in a vacuum state of the full quantum theory, although a classical solution may break a continuous symmetry. 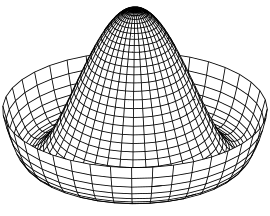 In the simplest idealized relativistic model, the spontaneously broken symmetry is summarized through an illustrative scalar field theory. The relevant Lagrangian, which essentially dictates how a system behaves, can be split up into kinetic and potential terms,

It is in this potential term V(Φ) that the symmetry breaking is triggered. An example of a potential, due to Jeffrey Goldstone[9] is illustrated in the graph at the right.

for any real θ between 0 and 2π. The system also has an unstable vacuum state corresponding to Φ = 0. This state has a U(1) symmetry. However, once the system falls into a specific stable vacuum state (amounting to a choice of θ), this symmetry will appear to be lost, or "spontaneously broken".

In fact, any other choice of θ would have exactly the same energy, implying the existence of a massless Nambu–Goldstone boson, the mode running around the circle at the minimum of this potential, and indicating there is some memory of the original symmetry in the Lagrangian.

On October 7, 2008, the Royal Swedish Academy of Sciences awarded the 2008 Nobel Prize in Physics to three scientists for their work in subatomic physics symmetry breaking. Yoichiro Nambu, of the University of Chicago, won half of the prize for the discovery of the mechanism of spontaneous broken symmetry in the context of the strong interactions, specifically chiral symmetry breaking. Physicists Makoto Kobayashi and Toshihide Maskawa shared the other half of the prize for discovering the origin of the explicit breaking of CP symmetry in the weak interactions.[10] This origin is ultimately reliant on the Higgs mechanism, but, so far understood as a "just so" feature of Higgs couplings, not a spontaneously broken symmetry phenomenon.