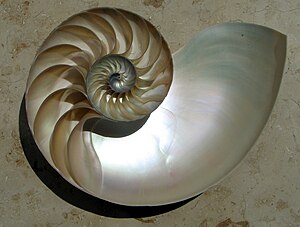 In mathematics, a spiral is a curve which emanates from a central point, getting progressively farther away as it revolves around the point. 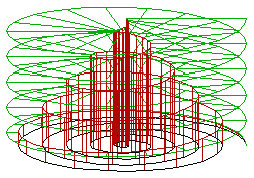 An Archimedean spiral, a helix, and a conic spiral

Two major definitions of "spiral" in a respected American dictionary are: [1]

a. A curve on a plane that winds around a fixed center point at a continuously increasing or decreasing distance from the point.
b. A three-dimensional curve that turns around an axis at a constant or continuously varying distance while moving parallel to the axis; a helix.

Definition a describes a planar curve, that extends in both of the perpendicular directions within its plane; the groove on one side of a record closely approximates a plane spiral (and it is by the finite width and depth of the groove, but not by the wider spacing between than within tracks, that it falls short of being a perfect example); note that successive loops differ in diameter. In another example, the "center lines" of the arms of a spiral galaxy trace logarithmic spirals.

Definition b includes two kinds of 3-dimensional relatives of spirals:

In the side picture, the black curve at the bottom is an Archimedean spiral, while the green curve is a helix. The curve shown in red is a conic helix.

A two-dimensional spiral may be described most easily using polar coordinates, where the radius r is a monotonic continuous function of angle θ. The circle would be regarded as a degenerate case (the function not being strictly monotonic, but rather constant).

Some of the more important sorts of two-dimensional spirals include:

For simple 3-d spirals, a third variable, h (height), is also a continuous, monotonic function of θ. For example, a conic helix may be defined as a spiral on a conic surface, with the distance to the apex an exponential function of θ.

The helix and vortex can be viewed as a kind of three-dimensional spiral.

For a helix with thickness, see spring (math).

A spherical spiral (rhumb line or loxodrome, left picture) is the curve on a sphere traced by a ship traveling from one pole to the other while keeping a fixed angle (unequal to 0° and to 90°) with respect to the meridians of longitude, i.e. keeping the same bearing. The curve has an infinite number of revolutions, with the distance between them decreasing as the curve approaches either of the poles. The gap between the curves of an Archimedean spiral (right picture) remains constant as the radius changes and hence is not a rhumb line. 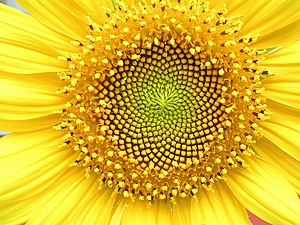 The study of spirals in nature has a long history, Christopher Wren observed that many shells form a logarithmic spiral. Jan Swammerdam observed the common mathematical characteristics of a wide range of shells from Helix to Spirula and Henry Nottidge Moseley described the mathematics of univalve shells. D’Arcy Wentworth Thompson's On Growth and Form gives extensive treatment to these spirals. He describes how shells are formed by rotating a closed curve around a fixed axis, the shape of the curve remains fixed but its size grows in a geometric progression. In some shell such as Nautilus and ammonites the generating curve revolves in a plane perpendicular to the axis and the shell will form a planar discoid shape. In others it follows a skew path forming a helico-spiral pattern. Thompson also studied spirals occurring in horns, teeth, claws and plants.[2]

A model for the pattern of florets in the head of a sunflower was proposed by H Vogel. This has the form

where n is the index number of the floret and c is a constant scaling factor, and is a form of Fermat's spiral. The angle 137.5° is related to the golden ratio and gives a close packing of florets.[3]

Spirals in plants and animals are frequently described as whorls. This is also the name given to spiral shaped fingerprints. 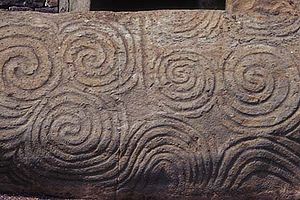 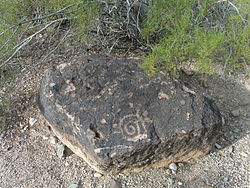 This Petroglyph with a spiral figure carved into it was made by the Hohokams, a Native American tribe in the United States, over a 1000 years ago.

The spiral and triple spiral motif is a Neolithic symbol in Europe (Megalithic Temples of Malta). The Celtic symbol the triple spiral is in fact a pre-Celtic symbol.[4] It is carved into the rock of a stone lozenge near the main entrance of the prehistoric Newgrange monument in County Meath, Ireland. Newgrange was built around 3200 BCE predating the Celts and the triple spirals were carved at least 2,500 years before the Celts reached Ireland but has long since been incorporated into Celtic culture.[5][5] The triskelion symbol, consisting of three interlocked spirals or three bent human legs, appears in many early cultures, including Mycenaean vessels, on coinage in Lycia, on staters of Pamphylia (at Aspendos, 370–333 BC) and Pisidia, as well as on the heraldic emblem on warriors' shields depicted on Greek pottery.[6]

Spirals can be found throughout pre-Columbian art in Latin and Central America. The more than 1,400 petroglyphs (rock engravings) in Las Plazuelas, Guanajuato Mexico, dating 750-1200 AD, predominantly depict spirals, dot figures and scale models.[7] In Colombia monkeys, frog and lizard like figures depicted in petroglyphs or as gold offering figures frequently includes spirals, for example on the palms of hands.[8] In Lower Central America spirals along with circles, wavy lines, crosses and points are universal petroglyphs characters.[9] Spirals can also be found among the Nazca Lines in the coastal desert of Peru, dating from 200 BC to 500 AD. The geoglyphs number in the thousands and depict animals, plants and geometric motifs, including spirals.[10]

While scholars are still debating the subject, there is a growing acceptance that the simple spiral, when found in Chinese art, is an early symbol for the sun. Roof tiles dating back to the Tang Dynasty with this symbol have been found west of the ancient city of Chang'an (modern-day Xian).

Spirals are also a symbol of hypnosis, stemming from the cliché of people and cartoon characters being hypnotized by staring into a spinning spiral (one example being Kaa in Disney's The Jungle Book). They are also used as a symbol of dizziness, where the eyes of a cartoon character, especially in anime and manga, will turn into spirals to show they are dizzy or dazed. The spiral is also found in structures as small as the double helix of DNA and as large as a galaxy. Because of this frequent natural occurrence, the spiral is the official symbol of the World Pantheist Movement.[11]

The spiral is also a symbol of the process of dialectic.

The spiral has inspired artists throughout the ages. Among the most famous of spiral-inspired art is Robert Smithson's earthwork, "Spiral Jetty", at the Great Salt Lake in Utah. The spiral theme is also present in David Wood's Spiral Resonance Field at the Balloon Museum in Albuquerque, as well as in the critically acclaimed Nine Inch Nails 1994 concept album The Downward Spiral. The Spiral is also a prominent theme in the anime Gurren Lagann, where it represents a philosophy and way of life. It also central in Mario Merz and Andy Goldsworthy's work.