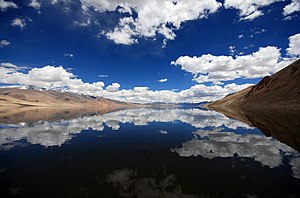 Reflections on still water are an example of specular reflection.

in the figure), and that the incident, normal, and reflected directions are coplanar. This behavior was first discovered through careful observation and measurement by Hero of Alexandria (AD c. 10–70).[1]

. If the light is propagating in a material with a higher index of refraction than the material whose surface it strikes, then total internal reflection may occur if the angle of incidence is greater than a certain critical angle. Specular reflection from a dielectric such as water can affect polarization and at Brewster's angle reflected light is completely linearly polarized parallel to the interface.

The law of reflection arises from diffraction of a plane wave with small wavelength on a flat boundary: when the boundary size is much larger than the wavelength then electrons of the boundary are seen oscillating exactly in phase only from one direction – the specular direction. If a mirror becomes very small compared to the wavelength, the law of reflection no longer holds and the behavior of light is more complicated.

The reflectivity of a surface is the ratio of reflected power to incident power. The reflectivity is a material characteristic, depends on the wavelength, and is related to the refractive index of the material through Fresnel's equations. In absorbing materials, like metals, it is related to the electronic absorption spectrum through the imaginary component of the complex refractive index. Measurements of specular reflection are performed with normal or varying incidence reflectometers using a scanning variable-wavelength light source. Lower quality measurements using a glossmeter quantify the glossy appearance of a surface in gloss units.

The image in a flat mirror has these features:

The reversal of images by a plane mirror is perceived differently depending on the circumstances. In many cases, the image in a mirror appears to be reversed from left to right. If a flat mirror is mounted on the ceiling it can appear to reverse up and down if a person stands under it and looks up at it. Similarly a car turning left will still appear to be turning left in the rear view mirror for the driver of a car in front of it. The reversal of directions, or lack thereof, depends on how the directions are defined. More specifically a mirror changes the handedness of the coordinate system, one axis of the coordinate system appears to be reversed, and the chirality of the image may change. For example the image of a right shoe will look like a left shoe. See also: Mirror Image.

The direction of a reflected ray is determined by the vector of incidence and the surface normal vector. Given an incident direction

is a scalar obtained with the dot product. Different authors may define the incident and reflection directions with different signs. Assuming these Euclidean vectors are represented in column form, the equation can be equivalently expressed as a matrix-vector multiplication:

is the so-called Householder transformation matrix, defined as:

is the identity matrix.