Sierpinski triangle in logic: The first 16 conjunctions of lexicographically ordered arguments
The columns interpreted as binary numbers give 1, 3, 5, 15, 17, 51... (sequence A001317 in OEIS)

The Sierpinski triangle (also with the original orthography Sierpiński), also called the Sierpinski gasket or the Sierpinski Sieve, is a fractal and attractive fixed set with the overall shape of an equilateral triangle, subdivided recursively into smaller equilateral triangles. Originally constructed as a curve, this is one of the basic examples of self-similar sets, i.e. it is a mathematically generated pattern that can be reproducible at any magnification or reduction. It is named after the Polish mathematician Wacław Sierpiński, but appeared as a decorative pattern many centuries prior to the work of Sierpiński.

There are many different ways of constructing the Sierpinski triangle.

The Sierpinski triangle may be constructed from an equilateral triangle by repeated removal of triangular subsets:

Each removed triangle (a trema) is topologically an open set.[1] This process of recursively removing triangles is an example of a finite subdivision rule.

The same sequence of shapes, converging to the Sierpinski triangle, can alternatively be generated by the following steps:

Note that this infinite process is not dependent upon the starting shape being a triangle—it is just clearer that way. The first few steps starting, for example, from a square also tend towards a Sierpinski triangle. Michael Barnsley used an image of a fish to illustrate this in his paper "V-variable fractals and superfractals."[2]

The actual fractal is what would be obtained after an infinite number of iterations. More formally, one describes it in terms of functions on closed sets of points. If we let

note the dilation by a factor of ½ about a point a, then the Sierpinski triangle with corners a, b, and c is the fixed set of the transformation

This is an attractive fixed set, so that when the operation is applied to any other set repeatedly, the images converge on the Sierpinski triangle. This is what is happening with the triangle above, but any other set would suffice.

If one takes a point and applies each of the transformations

to it randomly, the resulting points will be dense in the Sierpinski triangle, so the following algorithm will again generate arbitrarily close approximations to it:

Animated creation of a Sierpinski triangle using the chaos game

Animated construction of a Sierpinski triangle

Note: This method is also called the chaos game, and is an example of an iterated function system. You can start from any point outside or inside the triangle, and it would eventually form the Sierpinski Gasket with a few leftover points. It is interesting to do this with pencil and paper. A brief outline is formed after placing approximately one hundred points, and detail begins to appear after a few hundred. 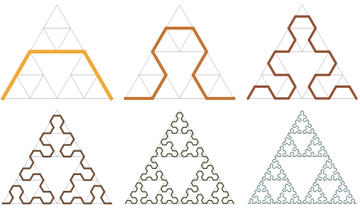 Construction of the Sierpiński arrowhead curve

Another construction for the Sierpinski triangle shows that it can be constructed as a curve in the plane. It is formed by a process of repeated modification of simpler curves, analogous to the construction of the Koch snowflake:

The resulting fractal curve is called the Sierpiński arrowhead curve, and its limiting shape is the Sierpinski triangle.[3]

The Towers of Hanoi puzzle involves moving disks of different sizes between three pegs, maintaining the property that no disk is ever placed on top of a smaller disk. The states of an n-disk puzzle, and the allowable moves from one state to another, form an undirected graph that can be represented geometrically as the intersection graph of the set of triangles remaining after the nth step in the construction of the Sierpinski triangle. Thus, in the limit as n goes to infinity, this sequence of graphs can be interpreted as a discrete analogue of the Sierpinski triangle.[7]

The area of a Sierpinski triangle is zero (in Lebesgue measure). The area remaining after each iteration is clearly 3/4 of the area from the previous iteration, and an infinite number of iterations results in zero.[9]

The points of a Sierpinski triangle have a simple characterization in Barycentric coordinates.[10] If a point has coordinates (0.u1u2u3…,0.v1v2v3…,0.w1w2w3…), expressed as Binary numbers, then the point is in Sierpinski's triangle if and only if ui+vi+wi=1 for all i.

A Sierpinski square-based pyramid and its 'inverse'
File:Sierpiński Pyramid from Above.PNG
A Sierpiński triangle-based pyramid as seen from above (4 main sections highlighted). Note the self-similarity in this 2-dimensional projected view, so that the resulting triangle could be a 2D fractal in itself.

The tetrix is the three-dimensional analogue of the Sierpinski triangle, formed by repeatedly shrinking a regular tetrahedron to one half its original height, putting together four copies of this tetrahedron with corners touching, and then repeating the process. This can also be done with a square pyramid and five copies instead. A tetrix constructed from an initial tetrahedron of side-length L has the property that the total surface area remains constant with each iteration.

. At the next iteration, the side-length is halved

and there are 4 such smaller tetrahedra. Therefore, the total surface area after the first iteration is:

This remains the case after each iteration. Though the surface area of each subsequent tetrahedron is 1/4 that of the tetrahedron in the previous iteration, there are 4 times as many—thus maintaining a constant total surface area.

The total enclosed volume, however, is geometrically decreasing (factor of 0.5) with each iteration and asymptotically approaches 0 as the number of iterations increases. In fact, it can be shown that, while having fixed area, it has no 3-dimensional character. The Hausdorff dimension of such a construction is

which agrees with the finite area of the figure. (A Hausdorff dimension strictly between 2 and 3 would indicate 0 volume and infinite area.)

Wacław Sierpiński described the Sierpinski triangle in 1915. However, similar patterns appear already in the 13th-century Cosmati mosaics in the cathedral of Anagni, Italy,[11] and other places of central Italy, for carpets in many places such as the nave of the Roman Basilica of Santa Maria in Cosmedin,[12] and for isolated triangles positioned in rotae in several churches and Basiliche.[13] In the case of the isolated triangle, it is interesting to notice that the iteration is at least of three levels.