The short-time Fourier transform (STFT), or alternatively short-term Fourier transform, is a Fourier-related transform used to determine the sinusoidal frequency and phase content of local sections of a signal as it changes over time.

Simply, in the continuous-time case, the function to be transformed is multiplied by a window function which is nonzero for only a short period of time. The Fourier transform (a one-dimensional function) of the resulting signal is taken as the window is slid along the time axis, resulting in a two-dimensional representation of the signal. Mathematically, this is written as:

where w(t) is the window function, commonly a Hann window or Gaussian window bell centered around zero, and x(t) is the signal to be transformed. (Note the difference between w and ω.) X(τ,ω) is essentially the Fourier Transform of x(t)w(t-τ), a complex function representing the phase and magnitude of the signal over time and frequency. Often phase unwrapping is employed along either or both the time axis, τ, and frequency axis, ω, to suppress any jump discontinuity of the phase result of the STFT. The time index τ is normally considered to be "slow" time and usually not expressed in as high resolution as time t.

{{#invoke:see also|seealso}} In the discrete time case, the data to be transformed could be broken up into chunks or frames (which usually overlap each other, to reduce artifacts at the boundary). Each chunk is Fourier transformed, and the complex result is added to a matrix, which records magnitude and phase for each point in time and frequency. This can be expressed as:

likewise, with signal x[n] and window w[n]. In this case, m is discrete and ω is continuous, but in most typical applications the STFT is performed on a computer using the Fast Fourier Transform, so both variables are discrete and quantized.

The magnitude squared of the STFT yields the spectrogram of the function:

If only a small number of ω are desired, or if the STFT is desired to be evaluated for every shift m of the window, then the STFT may be more efficiently evaluated using a sliding DFT algorithm.[1]

The STFT is invertible, that is, the original signal can be recovered from the transform by the Inverse STFT. The most widely accepted way of inverting the STFT is by using the overlap-add (OLA) method, which also allows for modifications to the STFT complex spectrum. This makes for a versatile signal processing method,[2] referred to as the overlap and add with modifications method.

It easily follows that

The continuous Fourier Transform is

Substituting x(t) from above:

So the Fourier Transform can be seen as a sort of phase coherent sum of all of the STFTs of x(t). Since the inverse Fourier transform is

then x(t) can be recovered from X(τ,ω) as

It can be seen, comparing to above that windowed "grain" or "wavelet" of x(t) is

the inverse Fourier transform of X(τ,ω) for τ fixed.

This property is related to the Heisenberg uncertainty principle, but not directly – see Gabor limit for discussion. The product of the standard deviation in time and frequency is limited. The boundary of the uncertainty principle (best simultaneous resolution of both) is reached with a Gaussian window function, as the Gaussian minimizes the Fourier uncertainty principle. This is called the Gabor transform (and with modifications for multiresolution becomes the Morlet wavelet transform).

One can consider the STFT for varying window size as a two-dimensional domain (time and frequency), as illustrated in the example below, which can be calculated by varying the window size. However, this is no longer a strictly time–frequency representation – the kernel is not constant over the entire signal.

that is composed of a set of four sinusoidal waveforms joined together in sequence. Each waveform is only composed of one of four frequencies (10, 25, 50, 100 Hz). The definition of

Then it is sampled at 400 Hz. The following spectrograms were produced:

It can also be explained with reference to the sampling and Nyquist frequency.

Take a window of N samples from an arbitrary real-valued signal at sampling rate fs . Taking the Fourier transform produces N complex coefficients. Of these coefficients only half are useful (the last N/2 being the complex conjugate of the first N/2 in reverse order, as this is a real valued signal).

These N/2 coefficients represent the frequencies 0 to fs/2 (Nyquist) and two consecutive coefficients are spaced apart by fs/N Hz. 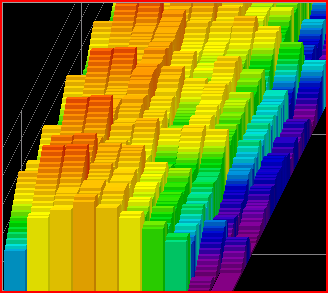 An STFT being used to analyze an audio signal across time

STFTs as well as standard Fourier transforms and other tools are frequently used to analyze music. The spectrogram can, for example, show frequency on the horizontal axis, with the lowest frequencies at left, and the highest at the right. The height of each bar (augmented by color) represents the amplitude of the frequencies within that band. The depth dimension represents time, where each new bar was a separate distinct transform. Audio engineers use this kind of visual to gain information about an audio sample, for example, to locate the frequencies of specific noises (especially when used with greater frequency resolution) or to find frequencies which may be more or less resonant in the space where the signal was recorded. This information can be used for equalization or tuning other audio effects.