A semitone, also called a half step or a half tone,[1] is the smallest musical interval commonly used in Western tonal music,[2] and it is considered the most dissonant[3] when sounded harmonically. It is defined as the interval between two adjacent notes in a 12-tone scale (e.g. from C to CTemplate:Music). This implies that its size is exactly or approximately equal to 100 cents, a twelfth of an octave.

In a 12-note approximately equally divided scale, any interval can be defined in terms of an appropriate number of semitones (e.g. a whole tone or major second is 2 semitones wide, a major third 4 semitones, and a perfect fifth 7 semitones.

In music theory, a distinction is made[4] between a diatonic semitone, or minor second (an interval encompassing two staff positions, e.g. from C to DTemplate:Music) and a chromatic semitone or augmented unison (an interval between two notes at the same staff position, e.g. from C to CTemplate:Music). These are enharmonically equivalent when twelve-tone equal temperament is used, but are not the same thing in meantone temperament, where the diatonic semitone is distinguished from and larger than the chromatic semitone (augmented unison.) See Interval (music)#Number for more details about this terminology. 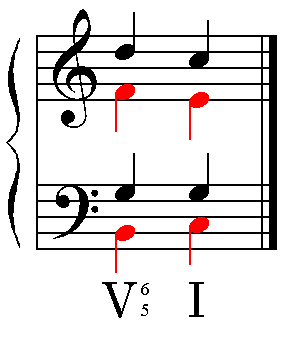 The melodic minor second is an integral part of most cadences of the Common practice period.

The minor second occurs in the major scale, between the third and fourth degree, (mi (E) and fa (F) in C major), and between the seventh and eighth degree (ti (B) and do (C) in C major). It is also called the diatonic semitone because it occurs between steps in the diatonic scale. The minor second is abbreviated m2 (or −2). Its inversion is the major seventh (M7, or +7).

Listen to a minor second in equal temperament (help·info). Here, middle C is followed by DTemplate:Music, which is a tone 100 cents sharper than C, and then by both tones together.

Melodically, this interval is very frequently used, and is of particular importance in cadences. In the perfect and deceptive cadences it appears as a resolution of the leading-tone to the tonic. In the plagal cadence, it appears as the falling of the subdominant to the mediant. It also occurs in many forms of the imperfect cadence, wherever the tonic falls to the leading-tone.

Harmonically, the interval usually occurs as some form of dissonance or a nonchord tone that is not part of the functional harmony. It may also appear in inversions of a major seventh chord, and in many added tone chords.

A harmonic minor second in J.S. Bach's Prelude in C major from the WTC book 1, mm. 7–9. The minor second may be viewed as a suspension of the B resolving into the following A minor seventh chord.

In unusual situations, the minor second can add a great deal of character to the music. For instance, Frédéric Chopin's Étude Op. 25, No. 5 opens with a melody accompanied by a line that plays fleeting minor seconds. These are used to humorous and whimsical effect, which contrasts with its more lyrical middle section. This eccentric dissonance has earned the piece its nickname: the "wrong note" étude. This kind of usage of the minor second appears in many other works of the Romantic period, such as Modest Mussorgsky's Ballet of the Unhatched Chicks. More recently, the music to the movie Jaws exemplifies the minor second.

Augmented unisons often appear as a consequence of secondary dominants, such as those in the soprano voice of this sequence from Felix Mendelssohn's Song Without Words Op. 102 No. 3, mm. 47–49. 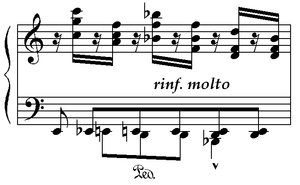 In addition to this kind of usage, harmonic augmented unisons are frequently written in modern works involving tone clusters, such as Iannis Xenakis' Evryali for piano solo.

The semitone appeared in the music theory of Greek antiquity as part of a diatonic or chromatic tetrachord, and it has always had a place in the diatonic scales of Western music since. The various modal scales of medieval music theory were all based upon this diatonic pattern of tones and semitones.

Though it would later become an integral part of the musical cadence, in the early polyphony of the 11th century this was not the case. Guido of Arezzo suggested instead in his Micrologus other alternatives: either proceeding by whole tone from a major second to a unison, or an occursus having two notes at a major third move by contrary motion toward a unison, each having moved a whole tone.

“As late as the 13th century the half step was experienced as a problematic interval not easily understood, as the irrational Template:Sic remainder between the perfect fourth and the ditone

.” In a melodic half step, no “tendency was perceived of the lower tone toward the upper, or of the upper toward the lower. The second tone was not taken to be the ‘goal’ of the first. Instead, the half step was avoided in clausulae because it lacked clarity as an interval.” [9]

However, beginning in the 13th century cadences begin to require motion in one voice by half step and the other a whole step in contrary motion.[9] These cadences would become a fundamental part of the musical language, even to the point where the usual accidental accompanying the minor second in a cadence was often omitted from the written score (a practice known as musica ficta). By the 16th century, the semitone had become a more versatile interval, sometimes even appearing as an augmented unison in very chromatic passages. Semantically, in the 16th century the repeated melodic semitone became associated with weeping, see: passus duriusculus, lament bass, and pianto.

By the Baroque era (1600 to 1750), the tonal harmonic framework was fully formed, and the various musical functions of the semitone were rigorously understood. Later in this period the adoption of well temperaments for instrumental tuning and the more frequent use of enharmonic equivalences increased the ease with which a semitone could be applied. Its function remained similar through the Classical period, and though it was used more frequently as the language of tonality became more chromatic in the Romantic period, the musical function of the semitone did not change.

In the 20th century, however, composers such as Arnold Schoenberg, Béla Bartók, and Igor Stravinsky sought alternatives or extensions of tonal harmony, and found other uses for the semitone. Often the semitone was exploited harmonically as a caustic dissonance, having no resolution. Some composers would even use large collections of harmonic semitones (tone clusters) as a source of cacophony in their music (e.g. the early piano works of Henry Cowell). By now, enharmonic equivalence was a commonplace property of equal temperament, and instrumental use of the semitone was not at all problematic for the performer. The composer was free to write semitones wherever he wished.

The exact size of a semitone depends on the tuning system used. Meantone temperaments have two distinct types of semitones, but in the exceptional case of Equal temperament, there is only one. The unevenly distributed well temperaments contain many different semitones. Pythagorean tuning, similar to meantone tuning, has two, but in other systems of just intonation there are many more possibilities.

In meantone systems, there are two different semitones. This results because of the break in the circle of fifths that occurs in the tuning system: diatonic semitones derive from a chain of five fifths that does not cross the break, and chromatic semitones come from one that does.

The chromatic semitone is usually smaller than the diatonic. In the common quarter-comma meantone, tuned as a cycle of tempered fifths from ETemplate:Music to GTemplate:Music, the chromatic and diatonic semitones are 76.0 and 117.1 cents wide respectively.

Extended meantone temperaments with more than 12 notes still retain the same two semitone sizes, but there is more flexibility for the musician about whether to use an augmented unison or minor second. 31-tone equal temperament is the most flexible of these, which makes an unbroken circle of 31 fifths, allowing the choice of semitone to be made for any pitch.

12-tone equal temperament is a form of meantone tuning in which the diatonic and chromatic semitones are exactly the same, because its circle of fifths has no break. Each semitone is equal to one twelfth of an octave. This is a ratio of 21/12 (approximately 1.05946), or 100 cents, and is 11.7 cents narrower than the 16:15 ratio (its most common form in just intonation, discussed below).

All diatonic intervals can be expressed as an equivalent number of semitones. For instance a whole tone equals two semitones.

There are many approximations, rational or otherwise, to the equal-tempered semitone. To cite a few:

For more examples, see Pythagorean and Just systems of tuning below.

There are many forms of well temperament, but the characteristic they all share is that their semitones are of an uneven size. Every semitone in a well temperament has its own interval (usually close to the equal-tempered version of 100 cents), and there is no clear distinction between a diatonic and chromatic semitone in the tuning. Well temperament was constructed so that enharmonic equivalence could be assumed between all of these semitones, and whether they were written as a minor second or augmented unison did not effect a different sound. Instead, in these systems, each key had a slightly different sonic color or character, beyond the limitations of conventional notation.

The Pythagorean diatonic semitone has a ratio of 256/243 (

It can be thought of as the difference between three octaves and five just fifths, and functions as a diatonic semitone in a Pythagorean tuning.

It can be thought of as the difference between four perfect octaves and seven just fifths, and functions as a chromatic semitone in a Pythagorean tuning.

'Larger' or major limma on C

A minor second in just intonation typically corresponds to a pitch ratio of 16:15 (

play (help·info)) or 1.0666... (approximately 111.7 cents), called the just diatonic semitone.[13] This is a practical just semitone, since it is the difference between a perfect fourth and major third (

An augmented unison in just intonation is another semitone of 25:24 (

The most frequently occurring semitones are the just ones (S3 and S1): S3 occurs six times out of 12, S1 three times, S2 twice, and S4 only once.

Other ratios may function as a minor second. In 7-limit there is the septimal diatonic semitone of 15:14 (

play (help·info)) between a septimal minor seventh and a fifth (21:8) and an octave and a major third (5:2). Both are more rarely used than their 5-limit neighbours, although the former was often implemented by theorist Henry Cowell, while Harry Partch used the latter as part of his 43-tone scale.

Under 11-limit tuning, there is a fairly common undecimal neutral second (12:11) (

play (help·info)), but it lies on the boundary between the minor and major second (150.6 cents). In just intonation there are infinitely many possibilities for intervals that fall within the range of the semitone (e.g. the Pythagorean semitones mentioned above), but most of them are impractical.

Though the names diatonic and chromatic are often used for these intervals, their musical function is not the same as the two meantone semitones. For instance, 15:14 would usually be written as an augmented unison, functioning as the chromatic counterpart to a diatonic 16:15. These distinctions are highly dependent on the musical context, and just intonation is not particularly well suited to chromatic usage (diatonic semitone function is more prevalent).

play 126.3 cents (help·info)). 31-tone equal temperament also distinguishes between these two intervals, which become 2 and 3 steps of the scale, respectively. 53-ET has an even closer match to the two semitones with 3 and 5 steps of its scale while 72-ET uses 4 (