{{ safesubst:#invoke:Unsubst||$N=Refimprove |date=__DATE__ |$B= {{#invoke:Message box|ambox}} }} In fluid dynamics, a secondary flow is a relatively minor flow superimposed on the primary flow, where the primary flow usually matches very closely the flow pattern predicted using simple analytical techniques and assuming the fluid is inviscid. (An inviscid fluid is a theoretical fluid having zero viscosity.)

The primary flow of a fluid, particularly in the majority of the flow field remote from solid surfaces immersed in the fluid, is usually very similar to what would be predicted using the basic principles of physics, and assuming the fluid is inviscid. However, in real flow situations, there are regions in the flow field where the flow is significantly different in both speed and direction to what is predicted for an inviscid fluid using simple analytical techniques. The flow in these regions is the secondary flow. These regions are usually in the vicinity of the boundary of the fluid adjacent to solid surfaces where viscous forces are at work, such as in the boundary layer.

At heights well above ground level there is a balance between the Coriolis effect, the local pressure gradient, and the velocity of the wind. This is balanced flow. Closer to the ground the air is not able to accelerate to the speed necessary for balanced flow. Interference by the surface of the ground or water, and by obstructions such as terrain, waves, trees and buildings, cause drag on the atmosphere and prevent the air from accelerating to the speed necessary to achieve balanced flow. As a result, the wind direction near ground level is partly parallel to the isobars in the region, and partly across the isobars in the direction from higher pressure to lower pressure.

In a region of high pressure (an anticyclone) the secondary flow includes a slow, widespread descent of air from mid altitudes toward ground level, and then outward across the isobars. This descent causes a reduction in relative humidity and explains why regions of high pressure usually experience cloud-free skies for many days.

Even though the wind speed near the center of a tropical cyclone is very fast, at any point on the earth’s surface it is not as fast as it is above that point away from the retarding influence of the Earth's surface. The slower speed of the air at the earth’s surface prevents the barometric pressure from falling as low as would be expected from the barometric pressure at mid altitudes. This is compatible with Bernoulli's principle. The secondary flow at the Earth's surface is toward the center of the cyclone but is then drawn upward by the significantly lower pressure at mid and high altitudes. As the secondary flow is drawn upward the air cools and its pressure falls, causing extremely heavy rainfall over several days. 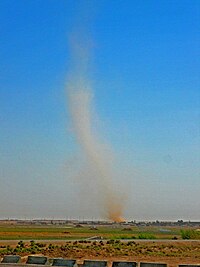 An example of a dust devil in Ramadi, Iraq.

Tornadoes and dust devils display localised vortex flow. Their fluid motion is similar to tropical cyclones but on a much smaller scale so that the Coriolis effect is not significant. The primary flow is circular around the vertical axis of the tornado or dust devil. As with all vortex flow, the speed of the flow is fastest at the core of the vortex. In accordance with Bernoulli's principle where the wind speed is fastest the air pressure is lowest; and where the wind speed is slowest the air pressure is highest. Consequently, near the center of the tornado or dust devil the air pressure is low. There is a pressure gradient toward the center of the vortex. This gradient, coupled with the slower speed of the air near the earth’s surface, causes a secondary flow toward the center of the tornado or dust devil, rather than in a purely circular pattern.

The slower speed of the air at the surface prevents the air pressure from falling as low as would normally be expected from the air pressure at greater heights. This is compatible with Bernoulli's principle. The secondary flow is toward the center of the tornado or dust devil, and is then drawn upward by the significantly lower pressure several thousands of feet above the surface in the case of a tornado, or several hundred feet in the case of a dust devil. Tornadoes can be very destructive and the secondary flow can cause debris to be swept into a central location and carried to low altitudes.

Dust devils can be seen by the dust stirred up at ground level, swept up by the secondary flow and concentrated in a central location. The accumulation of dust then accompanies the secondary flow upward into the region of intense low pressure that exists outside the influence of the ground.

Circular flow in a bowl or cup

The secondary flow along the floor of the bowl or cup can be seen by sprinkling heavy particles such as sugar, sand, rice or tea leaves into the water and then setting the water in circular motion by stirring with a hand or spoon. The boundary layer spirals inward and sweeps the heavier solids into a neat pile in the center of the bowl or cup. With water circulating in a bowl or cup, the primary flow is purely circular and might be expected to fling heavy particles outward to the perimeter. Instead, heavy particles can be seen to congregate in the center as a result of the secondary flow along the floor.

The primary flow around the bend is vortex flow – fastest speed where the radius of curvature is smallest and slowest speed where the radius is largest.[1] The higher pressure near the concave bank is accompanied by slower water speed, and the lower pressure near the convex bank is accompanied by faster water speed, and all this is consistent with Bernoulli's principle.

There is also a secondary flow in the boundary layer along the floor of the river bed. The boundary layer is not moving fast enough to balance the pressure gradient and so its path is partly downstream and partly across the stream from the concave bank toward the convex bank, driven by the pressure gradient.[2] The secondary flow is then upward toward the surface where it mixes with the primary flow or moves slowly across the surface, back toward the concave bank.[3] This motion is called helicoidal flow.

On the floor of the river bed the secondary flow sweeps sand, silt and gravel across the river and deposits the solids near the convex bank, in similar fashion to sugar or tea leaves being swept toward the center of a bowl or cup as described above. River bends often have a convex bank which is shallow and made up of sand, silt and gravel; and a concave bank which is steep and heavily eroded. This process can lead to formation of a meander or a point bar or, eventually, an oxbow lake.

Secondary flows are important in understanding the performance of turbines and other turbomachinery.[4][5]

Many types of secondary flows occur in turbomachinery, including inlet prerotation (intakes vorticity), tip clearance flow (tip leakage), flows at off-design performance (e.g. flow separation), and secondary vorticity flows.[6] Although secondary flows occur in all turbomachinery, it is particularly considered in axial flow compressors because of the thick boundary layers on the annulus walls.

For such axial-flow compressors, consider a set of guide vanes with an approach velocity c1. The velocity profile will be non-uniform due to friction between the annulus wall and the fluid. The vorticity of this boundary layer is normal to the approach velocity

Where z is the distance to the wall. As the vorticity of each blade onto each other will be of opposite directions, a secondary vorticity will be generated. If the deflection angle, e, between the guide vanes is small, the magnitude of the secondary vorticity is represented as

This secondary flow will be the integrated effect of the distribution of secondary vorticity along the blade length.