The pattern of weak isospin, W, weaker isospin, W', strong g3 and g8, and baryon minus lepton, B, charges for particles in the SO(10) model, rotated to show the embedding of the Georgi–Glashow model and Standard Model, with electric charge roughly along the vertical. In addition to Standard Model particles, the theory includes thirty colored X bosons, responsible for proton decay, and two W' bosons. 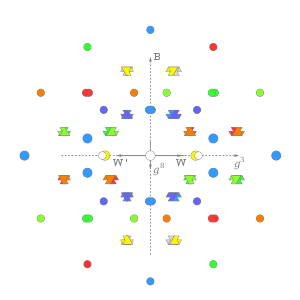 The pattern of charges for particles in the SO(10) model, rotated to show the embedding in E6.

In particle physics, one of the grand unified theories (GUT) is based on the SO(10) Lie group. (The Lie group involved is not really the special orthogonal group SO(10), but rather its double cover Spin(10); but calling it SO(10) is the standard convention.)

Before SU(5), Harald Fritzsch and Peter Minkowski and independently Howard Georgi found that all the matter contents are incorporated into a single representation, spinorial 16 of SO(10). (Historical note: the before in the previous sentence is misleading: Georgi found the SO(10) theory a few hours before finding SU(5) at the end of 1973.[1])

If the hypercharge is contained within SU(5), this is the conventional Georgi–Glashow model, with the 16 as the matter fields, the 10 as the electroweak Higgs field and the 24 within the 45 as the GUT Higgs field. The superpotential may then include renormalizable terms of the form Tr(45 ⋅ 45); Tr(45 ⋅ 45 ⋅ 45); 10 ⋅ 45 ⋅ 10, 10 ⋅ 16* ⋅ 16 and 16* ⋅ 16. The first three are responsible to the gauge symmetry breaking at low energies and give the Higgs mass, and the latter two give the matter particles masses and their Yukawa couplings to the Higgs.

There is another possible branching, under which the hypercharge is a linear combination of an SU(5) generator and χ. This is known as flipped SU(5).

breaks the gauge group down to the Georgi–Glashow SU(5). The same comment applies to the choice of a 126H and a

which breaks SO(10) down to the Standard Model.

The electroweak Higgs and the doublet-triplet splitting problem

The electroweak Higgs doublets come from an SO(10) 10H. Unfortunately, this same 10 also contains triplets. The masses of the doublets have to be stabilized at the electroweak scale, which is many orders of magnitude smaller than the GUT scale whereas the triplets have to be really heavy in order to prevent triplet-mediated proton decays. See doublet-triplet splitting problem.

sector interacts with the 45 sector.[2] 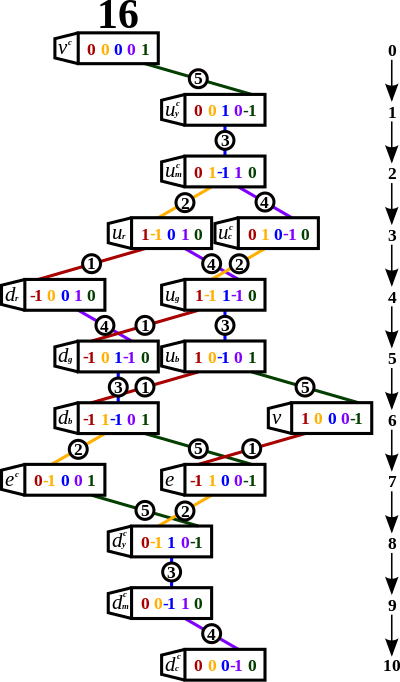 or add the nonrenormalizable coupling

Note that SO(10) contains both the Georgi–Glashow SU(5) and flipped SU(5).