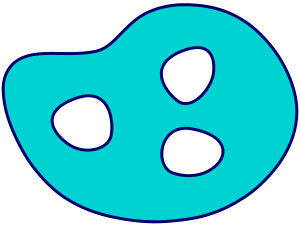 Given a holomorphic function f on the blue compact set and a point in each of the holes, one can approximate f as well as desired by rational functions having poles only at those three points.

In complex analysis, Runge's theorem (also known as Runge's approximation theorem) is named after the German mathematician Carl Runge who first proved it in the year 1885. It states the following:

Denoting by C the set of complex numbers, let K be a compact subset of C and let f be a function which is holomorphic on an open set containing K. If A is a set containing at least one complex number from every bounded connected component of C\K then there exists a sequence

. We merely know that for all members of

that do have poles, those poles lie in A.

One aspect that makes this theorem so powerful is that one can choose the set A arbitrarily. In other words, one can choose any complex numbers from the bounded connected components of C\K and the theorem guarantees the existence of a sequence of rational functions with poles only amongst those chosen numbers.

For the special case in which C\K is a connected set (or equivalently that K is simply-connected), the set A in the theorem will clearly be empty. Since rational functions with no poles are simply polynomials, we get the following corollary: If K is a compact subset of C such that C\K is a connected set, and f is a holomorphic function on K, then there exists a sequence of polynomials

that approaches f uniformly on K.

Runge's theorem generalises as follows: if one takes A to be a subset of the Riemann sphere C∪{∞} and requires that A intersect also the unbounded connected component of K (which now contains ∞). That is, in the formulation given above, the rational functions may turn out to have a pole at infinity, while in the more general formulation the pole can be chosen instead anywhere in the unbounded connected component of K.

An elementary proof, given in Template:Harvtxt, proceeds as follows. There is a closed piecewise-linear contour Γ in the open set, containing K in its interior. By Cauchy's integral theorem

for w in K. Riemann approximating sums can be used to approximate the contour integral uniformly over K. Each term in the sum is a scalar multiple of (z − w)−1 for some point z on the contour. This gives a uniform approximation by a rational function with poles on Γ.

If z0 is the point at infinity, then by the above procedure the rational function (z − w)−1 can first be approximated by a rational function g with poles at R > 0 where R is so large that K lies in w < R. The Taylor series expansion of g about 0 can then be truncated to give a polynomial approximation on K.