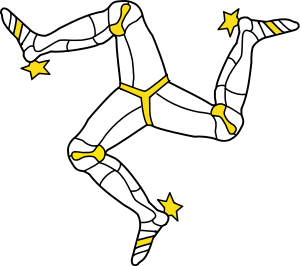 The triskelion appearing on the Isle of Man flag.

For symmetry with respect to rotations about a point we can take that point as origin. These rotations form the special orthogonal group SO(m), the group of m×m orthogonal matrices with determinant 1. For {{{1}}} this is the rotation group SO(3).

Laws of physics are SO(3)-invariant if they do not distinguish different directions in space. Because of Noether's theorem, rotational symmetry of a physical system is equivalent to the angular momentum conservation law.

The fundamental domain is a sector of 360°/n.

A typical 3D object with rotational symmetry (possibly also with perpendicular axes) but no mirror symmetry is a propeller.

For discrete symmetry with multiple symmetry axes through the same point, there are the following possibilities:

Rotational symmetry with respect to any angle

Rotational symmetry with respect to any angle is, in two dimensions, circular symmetry. The fundamental domain is a half-line.

Together with double translational symmetry the rotation groups are the following wallpaper groups, with axes per primitive cell:

Scaling of a lattice divides the number of points per unit area by the square of the scale factor. Therefore the number of 2-, 3-, 4-, and 6-fold rotocenters per primitive cell is 4, 3, 2, and 1, respectively, again including 4-fold as a special case of 2-fold, etc.