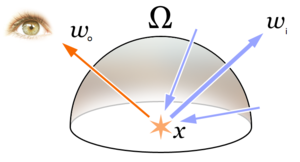 The rendering equation describes the total amount of light emitted from a point x along a particular viewing direction, given a function for incoming light and a BRDF.

In computer graphics, the rendering equation is an integral equation in which the equilibrium radiance leaving a point is given as the sum of emitted plus reflected radiance under a geometric optics approximation. It was simultaneously introduced into computer graphics by David Immel et al.[1] and James Kajiya[2] in 1986. The various realistic rendering techniques in computer graphics attempt to solve this equation.

The physical basis for the rendering equation is the law of conservation of energy. Assuming that L denotes radiance, we have that at each particular position and direction, the outgoing light (Lo) is the sum of the emitted light (Le) and the reflected light. The reflected light itself is the sum from all directions of the incoming light (Li) multiplied by the surface reflection and cosine of the incident angle.

The rendering equation may be written in the form

Two noteworthy features are: its linearity—it is composed only of multiplications and additions, and its spatial homogeneity—it is the same in all positions and orientations. These mean a wide range of factorings and rearrangements of the equation are possible.

may be sampled at or integrated over sections of the visible spectrum to obtain, for example, a trichromatic color sample. A pixel value for a single frame in an animation may be obtained by fixing

motion blur can be produced by averaging

Solving the rendering equation for any given scene is the primary challenge in realistic rendering. One approach to solving the equation is based on finite element methods, leading to the radiosity algorithm. Another approach using Monte Carlo methods has led to many different algorithms including path tracing, photon mapping, and Metropolis light transport, among others.

Although the equation is very general, it does not capture every aspect of light reflection. Some missing aspects include the following: