}} Real gases – as opposed to a perfect or ideal gas – exhibit properties that cannot be explained entirely using the ideal gas law. To understand the behaviour of real gases, the following must be taken into account:

For most applications, such a detailed analysis is unnecessary, and the ideal gas approximation can be used with reasonable accuracy. On the other hand, real-gas models have to be used near the condensation point of gases, near critical points, at very high pressures, to explain the Joule–Thomson effect and in other less usual cases. 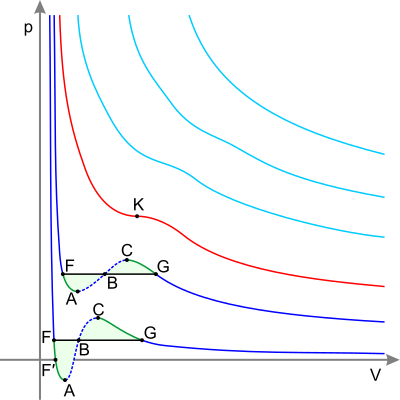 Where P is the pressure, T is the temperature, R the ideal gas constant, and Vm the molar volume. a and b are parameters that are determined empirically for each gas, but are sometimes estimated from their critical temperature (Tc) and critical pressure (Pc) using these relations:

where a and b two empirical parameters that are not the same parameters as in the van der Waals equation. These parameters can be determined:

but the modified version is somewhat more accurate

This model (named after C. Dieterici[2]) fell out of usage in recent years

where Vc is critical volume.

The Virial equation derives from a perturbative treatment of statistical mechanics.

Peng–Robinson equation of state (named after D.-Y. Peng and D. B. Robinson[3]) has the interesting property being useful in modeling some liquids as well as real gases.

The Wohl equation (named after A. Wohl[4]) is formulated in terms of critical values, making it useful when real gas constants are not available.

This equation is based on five experimentally determined constants. It is expressed as

This equation is known to be reasonably accurate for densities up to about 0.8 ρcr, where ρcr is the density of the substance at its critical point. The constants appearing in the above equation are available in following table when P is in KPa, v is in

The BWR equation, sometimes referred to as the BWRS equation,

where d is the molar density and where a, b, c, A, B, C, α, and γ are empirical constants. Note that the γ constant is a derivative of constant α and therefore almost identical to 1.