In mathematics, especially in abstract algebra, a quasigroup is an algebraic structure resembling a group in the sense that "division" is always possible. Quasigroups differ from groups mainly in that they need not be associative.

A quasigroup with an identity element is called a loop.

There are at least two equivalent formal definitions of quasigroup. One definition casts quasigroups as a set with one binary operation, and the other is a version from universal algebra which describes a quasigroup by using three primitive operations. We begin with the first definition, which is easier to follow.

A quasigroup (Q, *) is a set Q with a binary operation * (that is, a magma), obeying the Latin square property. This states that, for each a and b in Q, there exist unique elements x and y in Q such that:

(In other words: Each element of the set occurs exactly once in each row and exactly once in each column of the quasigroup's multiplication table, or Cayley table. This property ensures that the Cayley table of a finite quasigroup is a Latin square.)
The unique solutions to these equations are written x = a \ b and y = b / a. The operations '\' and '/' are called, respectively, left and right division.

The empty set equipped with the empty binary operation satisfies this definition of a quasigroup. Some authors accept the empty quasigroup but others explicitly exclude it.[1][2]

Given some algebraic structure, an identity is an equation in which all variables are tacitly universally quantified, and in which all operations are among the primitive operations proper to the structure. Algebraic structures axiomatized solely by identities are called varieties. Many standard results in universal algebra hold only for varieties. Quasigroups are varieties if left and right division are taken as primitive.

Hence if (Q, *) is a quasigroup according to the first definition, then (Q, *, \, /) is the same quasigroup in the sense of universal algebra. 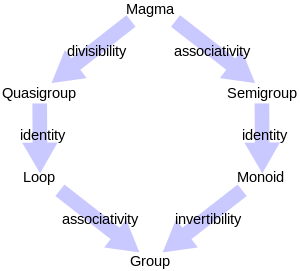 Algebraic structures between magmas and groups.

A loop is a quasigroup with an identity element, that is, an element e such that:

A loop which is associative is a group. There are some weaker associativity-like properties which have been given special names.

A Bol loop is a loop that satisfies, for each x, y and z in Q, one of the two identifies:

A loop that is both a left and right Bol loop is a Moufang loop. This is equivalent to any one of the following single Moufang identities:

A quasigroup (Q, ∗) is called totally anti-symmetric if for all c, x, y ∈ Q, the following implications hold:[3]

and it is called weakly totally anti-symmetric if only the first implication holds.[3]

This property is required, for example, in the Damm algorithm.

In the remainder of the article we shall denote quasigroup multiplication simply by juxtaposition.

Quasigroups have the cancellation property: if ab = ac, then b = c. This follows from the uniqueness of left division of ab or ac by a. Similarly, if ba = ca, then b = c.

The definition of a quasigroup can be treated as conditions on the left and right multiplication operators L(x), R(y): Q → Q, defined by

The definition says that both mappings are bijections from Q to itself. A magma Q is a quasigroup precisely when all these operators, for every x in Q, are bijective. The inverse mappings are left and right division, that is,

where 1 denotes the identity mapping on Q.

A loop is said to have (two-sided) inverses if

for all x. In this case the inverse element is usually denoted by

There are some stronger notions of inverses in loops which are often useful:

Any loop which satisfies the left, right, or antiautomorphic inverse properties automatically has two-sided inverses.

A quasigroup or loop homomorphism is a map f : Q → P between two quasigroups such that f(xy) = f(x)f(y). Quasigroup homomorphisms necessarily preserve left and right division, as well as identity elements (if they exist).

for all x, y in Q. A quasigroup homomorphism is just a homotopy for which the three maps are equal.

An autotopy is an isotopy from a quasigroup to itself. The set of all autotopies of a quasigroup form a group with the automorphism group as a subgroup.

Left and right division are examples of forming a quasigroup by permuting the variables in the defining equation. From the original operation * (i.e., x * y = z) we can form five new operations: x o y := y * x (the opposite operation), / and \, and their opposites. That makes a total of six quasigroup operations, which are called the conjugates or parastrophes of *. Any two of these operations are said to be "conjugate" or "parastrophic" to each other (and to themselves).

If the set Q has two quasigroup operations, * and ·, and one of them is isotopic to a conjugate of the other, the operations are said to be paratopic to each other. There are also many other names for this relation of "paratopy", e.g., isostrophe.

An n-ary quasigroup is a set with an n-ary operation, (Q, f) with f: Qn → Q, such that the equation f(x1,...,xn) = y has a unique solution for any one variable if all the other n variables are specified arbitrarily. Polyadic or multiary means n-ary for some nonnegative integer n.

There exist multiary quasigroups that cannot be represented in any of these ways. An n-ary quasigroup is irreducible if its operation cannot be factored into the composition of two operations in the following way:

An n-ary quasigroup with an n-ary version of associativity is called an n-ary group.

Template:Expand section A right-quasigroup (Q, *, /) is a type (2,2) algebra satisfying the identities:

Number of small quasigroups and loops