The QR algorithm for the computation of eigenvalues, which is based on the QR-decomposition, is considered to be one of the 10 most important algorithms of the 20th century.[2] It was independently discovered by an English computer scientist John G. F. Francis and Soviet mathematician Vera Kublanovskaya in 1961.

Any real square matrix A may be decomposed as

where Q is an orthogonal matrix (its columns are orthogonal unit vectors meaning QTQ = I) and R is an upper triangular matrix (also called right triangular matrix). This generalizes to a complex square matrix A and a unitary matrix Q (where Q*Q = I). If A is invertible, then the factorization is unique if we require that the diagonal elements of R are positive.

Template:Harvtxt call Q1R1 the thin QR factorization of A; Trefethen and Bau call this the reduced QR factorization.[1] If A is of full rank n and we require that the diagonal elements of R1 are positive then R1 and Q1 are unique, but in general Q2 is not. R1 is then equal to the upper triangular factor of the Cholesky decomposition of ATemplate:Starred A (= ATA if A is real).

Analogously, we can define QL, RQ, and LQ decompositions, with L being a lower triangular matrix.

There are several methods for actually computing the QR decomposition, such as by means of the Gram–Schmidt process, Householder transformations, or Givens rotations. Each has a number of advantages and disadvantages.

Template:Rellink Consider the Gram–Schmidt process applied to the columns of the full column rank matrix

for the complex case).

We then rearrange the equations above so that the

s are on the left, using the fact that the

. This can be written in matrix form:

Consider the decomposition of

Recall that an orthogonal matrix

Then, we can calculate

by means of Gram–Schmidt as follows:

The RQ decomposition transforms a matrix A into the product of an upper triangular matrix R (also known as right-triangular) and an orthogonal matrix Q. The only difference from QR decomposition is the order of these matrices.

QR decomposition is Gram–Schmidt orthogonalization of columns of A, started from the first column.

RQ decomposition is Gram–Schmidt orthogonalization of rows of A, started from the last row. 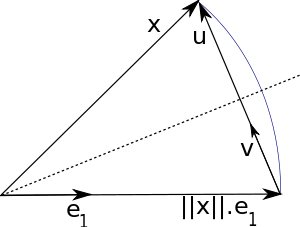 Householder reflection for QR-decomposition: The goal is to find a linear transformation that changes the vector

into a vector of same length which is collinear to

. We could use an orthogonal projection (Gram-Schmidt) but this will be numerically unstable if the vectors

are close to orthogonal. Instead, the Householder reflection reflects through the dotted line (chosen to bisect the angle between

). The maximum angle with this transform is at most 45 degrees.

A Householder reflection (or Householder transformation) is a transformation that takes a vector and reflects it about some plane or hyperplane. We can use this operation to calculate the QR factorization of an m-by-n matrix

Q can be used to reflect a vector in such a way that all coordinates but one disappear.

be an arbitrary real m-dimensional column vector of

for a scalar α. If the algorithm is implemented using floating-point arithmetic, then α should get the opposite sign as the k-th coordinate of

is to be the pivot coordinate after which all entries are 0 in matrix A's final upper triangular form, to avoid loss of significance. In the complex case, set

is an m-by-m identity matrix, set

is the conjugate transpose (transjugate) of

is an m-by-m Householder matrix and

This can be used to gradually transform an m-by-n matrix A to upper triangular form. First, we multiply A with the Householder matrix Q1 we obtain when we choose the first matrix column for x. This results in a matrix Q1A with zeros in the left column (except for the first row).

This can be repeated for A′ (obtained from Q1A by deleting the first row and first column), resulting in a Householder matrix Q′2. Note that Q′2 is smaller than Q1. Since we want it really to operate on Q1A instead of A′ we need to expand it to the upper left, filling in a 1, or in general:

iterations of this process,

is an upper triangular matrix. So, with

is a QR decomposition of

This method has greater numerical stability than the Gram–Schmidt method above.

The following table gives the number of operations in the k-th step of the QR-decomposition by the Householder transformation, assuming a square matrix with size n.

Summing these numbers over the n − 1 steps (for a square matrix of size n), the complexity of the algorithm (in terms of floating point multiplications) is given by

Let us calculate the decomposition of

First, we need to find a reflection that transforms the first column of matrix A, vector

so we already have almost a triangular matrix. We only need to zero the (3, 2) entry.

Take the (1, 1) minor, and then apply the process again to

By the same method as above, we obtain the matrix of the Householder transformation

after performing a direct sum with 1 to make sure the next step in the process works properly.

The matrix Q is orthogonal and R is upper triangular, so A = QR is the required QR-decomposition.

QR decompositions can also be computed with a series of Givens rotations. Each rotation zeros an element in the subdiagonal of the matrix, forming the R matrix. The concatenation of all the Givens rotations forms the orthogonal Q matrix.

Let us calculate the decomposition of

First, we need to form a rotation matrix that will zero the lowermost left element,

. We form this matrix using the Givens rotation method, and call the matrix

. We will first rotate the vector

, to point along the X axis. This vector has an angle

And the result of

now has a zero in the

We can similarly form Givens matrices

, which will zero the sub-diagonal elements

is formed from the concatenation of all the Givens matrices

, and the QR decomposition is

Connection to a determinant or a product of eigenvalues

We can use QR decomposition to find the absolute value of the determinant of a square matrix. Suppose a matrix is decomposed as

Since Q is unitary,

are the entries on the diagonal of R.

Furthermore, because the determinant equals the product of the eigenvalues, we have

We can extend the above properties to non-square complex matrix

by introducing the definition of QR-decomposition for non-square complex matrix and replacing eigenvalues with singular values.

Suppose a QR decomposition for a non-square matrix A:

is a zero matrix and

is a unitary matrix.

From the properties of SVD and determinant of matrix, we have

are singular values of

Note that the singular values of

are identical, although their complex eigenvalues may be different. However, if A is square, the following is true:

In conclusion, QR decomposition can be used efficiently to calculate the product of the eigenvalues or singular values of a matrix.

Column pivoting is useful when A is (nearly) rank deficient, or is suspected of being so. It can also improve numerical accuracy. P is usually chosen so that the diagonal elements of R are non-increasing:

. This can be used to find the (numerical) rank of A at lower computational cost than a singular value decomposition, forming the basis of so-called rank-revealing QR algorithms.

To solve the underdetermined (

where the matrix A has dimensions

, first find the QR factorization of the transpose of A:

, where Q is an orthogonal matrix (i.e.

right triangular matrix, and the zero matrix has dimension

. After some algebra, it can be shown that a solution to the inverse problem can be expressed as:

where one may either find

by Gaussian elimination or compute

To find a solution,

which minimizes the norm

, first find the QR factorization of A:

. The solution can then be expressed as

columns of the full orthonormal basis

is as before. Equivalent to the underdetermined case, back substitution can be used to quickly and accurately find this

are often provided by numerical libraries as an "economic" QR decomposition.)