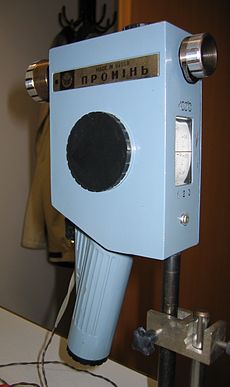 A sailor checking the temperature of a ventilation system

A pyrometer is a type of thermometer used to measure high temperatures. Various forms of pyrometers have historically existed. In the modern usage, it is a non-contacting device that intercepts and measures thermal radiation, a process known as pyrometry. The thermal radiation can be used to determine the temperature of an object's surface.

The word pyrometer comes from the Greek word for fire, "πυρ" (pyro), and meter, meaning to measure. The word pyrometer was originally coined to denote a device capable of measuring the temperature of an object by its incandescence, or the light that is emitted by the body as caused by its high temperature.[1]

A modern pyrometer has an optical system and a detector. The optical system focuses the thermal radiation onto the detector. The output signal of the detector (temperature T) is related to the thermal radiation or irradiance j* of the target object through the Stefan–Boltzmann law, the constant of proportionality σ, called the Stefan-Boltzmann constant and the emissivity ε of the object.

This output is used to infer the object's temperature. Thus, there is no need for direct contact between the pyrometer and the object, as there is with thermocouples and resistance temperature detectors (RTDs).

The potter Josiah Wedgwood invented the first pyrometer to measure the temperature in his kilns,[2] which first compared the color of clay fired at known temperatures, but was eventually upgraded to measuring the shrinkage of pieces of clay, which depended on the heat of the kiln.[3] Later examples used the expansion of a metal bar.[4]

A pyrometer from 1852. Heating the metal bar (a) presses against a lever (b), which presses against another lever (c) that serves as a measuring index. (e) is an immovable prop which holds the bar in place. A spring on (c) pushes against (b), causing the index to fall back once the bar cools.

Technician measuring the temperature of molten silicon at 2650°F with a pyrometer in Czochralski crystal growing equipment at Raytheon transistor plant in 1956.

Modern pyrometers became available when the first disappearing filament pyrometer was built by L. Holborn and F. Kurlbaum in 1901.[5] This device superimposed a thin, heated filament over the object to be measured and relied on the operator’s eye to detect when the filament vanished.[6] The object temperature was then read from a scale on the pyrometer.

The temperature returned by the vanishing filament pyrometer and others of its kind, called brightness pyrometers, is dependent on the emissivity of the object. With greater use of brightness pyrometers, it became obvious that problems existed with relying on knowledge of the value of emissivity. Emissivity was found to change, often drastically, with surface roughness, bulk and surface composition, and even the temperature itself.[7]

To get around these difficulties, the ratio or two-color pyrometer was developed. They rely on the fact that Planck's law, which relates temperature to the intensity of radiation emitted at individual wavelengths, can be solved for temperature if Planck's statement of the intensities at two different wavelengths is divided. This solution assumes that the emissivity is the same at both wavelengths [6] and cancels out in the division. This is known as the gray body assumption. Ratio pyrometers are essentially two brightness pyrometers in a single instrument. The operational principles of the ratio pyrometers were developed in the 1920s and 1930s, and they were commercially available in 1939.[5]

To more accurately measure the temperature of real objects with unknown or changing emissivities, multiwavelength pyrometers were envisioned at the US National Institute of Standards and Technology and described in 1992.[5] Multiwavelength pyrometers use three or more wavelengths and mathematical manipulation of the results to attempt to achieve accurate temperature measurement even when the emissivity is unknown, changing, and different at all wavelengths.[6][7][8]

Pyrometers are suited especially to the measurement of moving objects or any surfaces that can not be reached or can not be touched.

Temperature is a fundamental parameter in metallurgical furnace operations. Reliable and continuous measurement of the melt temperature is essential for effective control of the operation. Smelting rates can be maximized, slag can be produced at the optimum temperature, fuel consumption is minimized and refractory life may also be lengthened. Thermocouples were the traditional devices used for this purpose, but they are unsuitable for continuous measurement because they melt and degrade.

Salt bath furnaces operate at temperatures up to 1300 °C and are used for heat treatment. At very high working temperatures with intense heat transfer between the molten salt and the steel being treated, precision is maintained by measuring the temperature of the molten salt. Most errors are caused by slag on the surface which is cooler than the salt bath.[9]

The Tuyère Pyrometer is an optical instrument for temperature measurement through the tuyeres which are normally used for feeding air or reactants into the bath of the furnace.

A steam boiler may be fitted with a pyrometer to measure the steam temperature in the superheater.

A hot air balloon is equipped with a pyrometer for measuring the temperature at the top of the envelope in order to prevent overheating of the fabric.

Pyrometry of gases presents difficulties. These are most commonly overcome by using thin filament pyrometry or soot pyrometry. Both techniques involve small solids in contact with hot gases.