In mathematics, particularly in abstract algebra and homological algebra, the concept of projective module over a ring R is a generalisation of the idea of a free module (that is, a module with basis vectors). Various equivalent characterizations of these modules appear below.

Projective modules were first introduced in 1956 in the influential book Homological Algebra by Henri Cartan and Samuel Eilenberg. 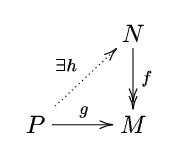 The advantage of this definition of "projective" is that it can be carried out in categories more general than module categories: we don't need a notion of "free object". It can also be dualized, leading to injective modules.

A module P is projective if and only if for every surjective module homomorphism f : M ↠ P there exists a module homomorphism h : P → M such that fh = idP. The existence of such a section map h implies that P is a direct summand of M and that f is essentially a projection on the summand P. More explicitly, M = im(h) ⊕ ker(f), and im(h) is isomorphic to P.

The foregoing is a detailed description of the following statement: A module P is projective if every short exact sequence of modules of the form

is a split exact sequence.

A module P is projective if and only if there is a free module F and another module Q such that the direct sum of P and Q is F.

An R-module P is projective if and only if the functor Hom(P,-): R-Mod → AB is an exact functor, where R-Mod is the category of left R-modules and AB the category of Abelian groups. When the ring R is commutative, AB is advantageously replaced by R-Mod in the preceding characterization. This functor is always left exact, but, when P is projective, it is also right exact. This means that P is projective if and only if this functor preserves epimorphisms (surjective homomorphisms), or if it preserves finite colimits.

such that for every x in P, fi(x) is only nonzero for finitely many i, and

The relation of projective modules to free and flat modules is subsumed in the following diagram of module properties:

{{#invoke:main|main}} Given a module, M, a projective resolution of M is an infinite exact sequence of modules

However, there are examples of finitely generated modules over a non-Noetherian ring which are locally free and not projective. For instance, a Boolean ring has all of its localizations isomorphic to F2, the field of two elements, so any module over a Boolean ring is locally free, but there are some non-projective modules over Boolean rings. One example is R/I where R is a direct product of countably many copies of F2 and I is the direct sum of countably many copies of F2 inside of R. The R-module R/I is locally free since R is Boolean (and it's finitely generated as an R-module too, with a spanning set of size 1), but R/I is not projective because I is not a principal ideal. (If a quotient module R/I, for any commutative ring R and ideal I, is a projective R-module then I is principal.)

However, it is true that for finitely presented modules M over a commutative ring R (in particular if M is a finitely generated R-module and R is noetherian), the following are equivalent.[5]

Moreover, if R is a noetherian integral domain, then, by Nakayama's lemma, these conditions are equivalent to

Let A be a commutative ring. If B is a (possibly non-commutative) A-algebra that is a finitely generated projective A-module containing A as a subring, then A is a direct factor of B.[7]

Let P be a finitely generated projective module over a commutative ring R and X be the spectrum of R. The rank of P at a prime ideal

in X is the rank of the free

. It is a locally constant function on X. In particular, if X is connected (that is if R or its quotient by its nilradical is an integral domain), then P has constant rank.

Vector bundles are locally free. If there is some notion of "localization" which can be carried over to modules, such as is given at localization of a ring, one can define locally free modules, and the projective modules then typically coincide with the locally free ones.

Projective modules over a polynomial ring

The Quillen–Suslin theorem, which solves Serre's problem is another deep result; it states that if K is a field, or more generally a principal ideal domain, and R = K[X1,...,Xn] is a polynomial ring over K, then every projective module over R is free. This problem was first raised by Serre with K a field (and the modules being finitely generated). Bass settled it for non-finitely generated modules and Quillen and Suslin independently and simultaneously treated the case of finitely generated modules.

Since every projective module over a principal ideal domain is free, one might ask this question: if R is a commutative ring such that every (finitely generated) projective R-module is free, then is every (finitely generated) projective R[X]-module free? The answer is no. A counterexample occurs with R equal to the local ring of the curve y2 = x3 at the origin. So Serre's problem can not be proved by a simple induction on the number of variables.