In economics, profit maximization is the short run or long run process by which a firm determines the price and output level that returns the greatest profit. There are several approaches to this problem. The total revenue–total cost perspective relies on the fact that profit equals revenue minus cost and focuses on maximizing this difference, and the marginal revenue–marginal cost perspective is based on the fact that total profit reaches its maximum point where marginal revenue equals marginal cost.

Any costs incurred by a firm may be classed into two groups: fixed costs and variable costs. Fixed costs, which occur only in the short run, are incurred by the business at any level of output, including zero output. These may include equipment maintenance, rent, wages of employees whose numbers cannot be increased or decreased in the short run, and general upkeep. Variable costs change with the level of output, increasing as more product is generated. Materials consumed during production often have the largest impact on this category, which also includes the wages of employees who can be hired and laid off in the span of time (long run or short run) under consideration. Fixed cost and variable cost, combined, equal total cost.

Revenue is the amount of money that a company receives from its normal business activities, usually from the sale of goods and services (as opposed to monies from security sales such as equity shares or debt issuances).

Marginal cost and revenue, depending on whether the calculus approach is taken or not, are defined as either the change in cost or revenue as each additional unit is produced, or the derivative of cost or revenue with respect to the quantity of output. For instance, taking the first definition, if it costs a firm 400 USD to produce 5 units and 480 USD to produce 6, the marginal cost of the sixth unit is 80 dollars. 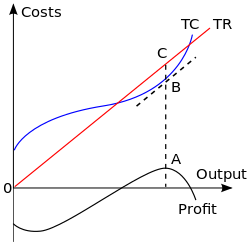 To obtain the profit maximizing output quantity, we start by recognizing that profit is equal to total revenue (TR) minus total cost (TC). Given a table of costs and revenues at each quantity, we can either compute equations or plot the data directly on a graph. The profit-maximizing output is the one at which this difference reaches its maximum. {{ safesubst:#invoke:Unsubst||date=__DATE__ |$B= {{#invoke:Category handler|main}}{{#invoke:Category handler|main}}[citation needed] }}

In the accompanying diagram, the linear total revenue curve represents the case in which the firm is a perfect competitor in the goods market, and thus cannot set its own selling price. The profit-maximizing output level is represented as the one at which total revenue is the height of C and total cost is the height of B; the maximal profit is measured as CB. This output level is also the one at which the total profit curve is at its maximum.

If, contrary to what is assumed in the graph, the firm is not a perfect competitor in the output market, the price to sell the product at can be read off the demand curve at the firm's optimal quantity of output.

The intersection of MR and MC is shown in the next diagram as point A. If the industry is perfectly competitive (as is assumed in the diagram), the firm faces a demand curve (D) that is identical to its marginal revenue curve (MR), and this is a horizontal line at a price determined by industry supply and demand. Average total costs are represented by curve ATC. Total economic profit is represented by the area of the rectangle PABC. The optimum quantity (Q) is the same as the optimum quantity in the first diagram.

If the firm is operating in a non-competitive market, changes would have to be made to the diagrams. For example, the marginal revenue curve would have a negative gradient, due to the overall market demand curve. In a non-competitive environment, more complicated profit maximization solutions involve the use of game theory.

Case in which maximizing revenue is equivalent

In some cases a firm's demand and cost conditions are such that marginal profits are greater than zero for all levels of production up to a certain maximum.[2] In this case marginal profit plunges to zero immediately after that maximum is reached; hence the Mπ = 0 rule implies that output should be produced at the maximum level, which also happens to be the level that maximizes revenue.[2] In other words the profit maximizing quantity and price can be determined by setting marginal revenue equal to zero, which occurs at the maximal level of output. Marginal revenue equals zero when the total revenue curve has reached its maximum value. An example would be a scheduled airline flight. The marginal costs of flying one more passenger on the flight are negligible until all the seats are filled. The airline would maximize profit by filling all the seats.

In addition to using methods to determine a firm's optimal level of output, a firm that is not perfectly competitive can equivalently set price to maximize profit (since setting price along a given demand curve involves picking a preferred point on that curve, which is equivalent to picking a preferred quantity to produce and sell). The profit maximization conditions can be expressed in a "more easily applicable" form or rule of thumb than the above perspectives use.[5] The first step is to rewrite the expression for marginal revenue as MR = ∆TR/∆Q =(P∆Q+Q∆P)/∆Q=P+Q∆P/∆Q, where P and Q refer to the midpoints between the old and new values of price and quantity respectively.[5] The marginal revenue from an "incremental unit of quantity" has two parts: first, the revenue the firm gains from selling the additional units or P∆Q. The additional units are called the marginal units.[6] Producing one extra unit and selling it at price P brings in revenue of P. Moreover, one must consider "the revenue the firm loses on the units it could have sold at the higher price"[6]—that is, if the price of all units had not been pulled down by the effort to sell more units. These units that have lost revenue are called the infra-marginal units.[6] That is, selling the extra unit results in a small drop in price which reduces the revenue for all units sold by the amount Q(∆P/∆Q). Thus MR = P + Q(∆P/∆Q) = P +P (Q/P)(∆P/∆Q) = P + P/(PED), where PED is the price elasticity of demand characterizing the demand curve of the firms' customers, which is negative. Then setting MC = MR gives MC = P + P/PED so (P - MC)/P = - 1/PED and P = MC/[1 + (1/PED)]. Thus the optimal markup rule is:

In words, the rule is that the size of the markup is inversely related to the price elasticity of demand for the good.[7]

The optimal markup rule also implies that a non-competitive firm will produce on the elastic region of its market demand curve. Marginal cost is positive. The term PED/(1+PED) would be positive so P>0 only if PED is between -1 and -∝ —that is, if demand is elastic at that level of output.[9] The intuition behind this result is that, if demand is inelastic at some value Q1 then a decrease in Q would increase P more than proportionately, thereby increasing revenue PQ; since lower Q would also lead to lower total cost, profit would go up due to the combination of increased revenue and decreased cost. Thus Q1 does not give the highest possible profit.