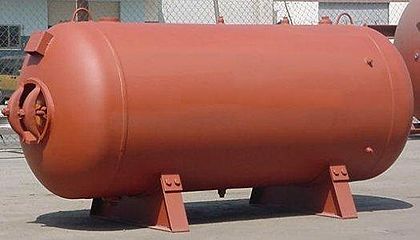 A pressure vessel is a closed container designed to hold gases or liquids at a pressure substantially different from the ambient pressure.

The pressure differential is dangerous, and fatal accidents have occurred in the history of pressure vessel development and operation. Consequently, pressure vessel design, manufacture, and operation are regulated by engineering authorities backed by legislation. For these reasons, the definition of a pressure vessel varies from country to country, but involves parameters such as maximum safe operating pressure and temperature.

A Template:Convert pressure vessel from 1919, wrapped with high tensile steel banding and steel rods to secure the end caps.

Large pressure vessels were invented during the industrial revolution, particularly in Great Britain, to be used as boilers for making steam to drive steam engines.

Design and testing standards and a system of certification came about as the result of fatal boiler explosions.

In an early effort to design a tank capable of withstanding pressures up to Template:Convert, a Template:Convert diameter tank was developed in 1919 that was spirally-wound with two layers of high tensile strength steel wire to prevent sidewall rupture, and the end caps longitudinally reinforced with lengthwise high-tensile rods.[1]

Shape of a pressure vessel

Pressure vessels can theoretically be almost any shape, but shapes made of sections of spheres, cylinders, and cones are usually employed. A common design is a cylinder with end caps called heads. Head shapes are frequently either hemispherical or dished (torispherical). More complicated shapes have historically been much harder to analyze for safe operation and are usually far more difficult to construct. 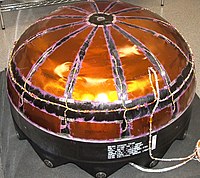 Many pressure vessels are made of steel. To manufacture a cylindrical or spherical pressure vessel, rolled and possibly forged parts would have to be welded together. Some mechanical properties of steel, achieved by rolling or forging, could be adversely affected by welding, unless special precautions are taken. In addition to adequate mechanical strength, current standards dictate the use of steel with a high impact resistance, especially for vessels used in low temperatures. In applications where carbon steel would suffer corrosion, special corrosion resistant material should also be used.

Other very common materials include polymers such as PET in carbonated beverage containers and copper in plumbing.

Pressure vessels may be lined with various metals, ceramics, or polymers to prevent leaking and protect the structure of the vessel from the contained medium. This liner may also carry a significant portion of the pressure load.[3][4]

Pressure Vessels may also be constructed from concrete (PCV) or other materials which are weak in tension. Cabling, wrapped around the vessel or within the wall or the vessel itself, provides the necessary tension to resist the internal pressure. A "leakproof steel thin membrane" lines the internal wall of the vessel. Such vessels can be assembled from modular pieces and so have "no inherent size limitations".[5] There is also a high order of redundancy thanks to the large number of individual cables resisting the internal pressure.

Leak before burst describes a pressure vessel designed such that a crack in the vessel will grow through the wall, allowing the contained fluid to escape and reducing the pressure, prior to growing so large as to cause fracture at the operating pressure.

Example of a valve used for gas cylinders.

As the pressure vessel is designed to a pressure, there is typically a safety valve or relief valve to ensure that this pressure is not exceeded in operation.

A unique application of a pressure vessel is the passenger cabin of an airliner; The outer skin carries both the aircraft maneuvering loads and the cabin pressurization loads.

Depending on the application and local circumstances, alternatives to pressure vessels exist. Examples can be seen in domestic water collection systems, where the following may be used:

No matter what shape it takes, the minimum mass of a pressure vessel scales with the pressure and volume it contains and is inversely proportional to the strength to weight ratio of the construction material (minimum mass decreases as strength increases[9]).

Scaling of stress in walls of vessel

Because (for a given pressure) the thickness of the walls scales with the radius of the tank, the mass of a tank (which scales as the length times radius times thickness of the wall for a cylindrical tank) scales with the volume of the gas held (which scales as length times radius squared). The exact formula varies with the tank shape but depends on the density, ρ, and maximum allowable stress σ of the material in addition to the pressure P and volume V of the vessel. (See below for the exact equations for the stress in the walls.)

For a sphere, the mass of a pressure vessel is

Other shapes besides a sphere have constants larger than 3/2 (infinite cylinders take 2), although some tanks, such as non-spherical wound composite tanks can approach this.

This is sometimes called a "bullet"Template:Cn for its shape, although in geometric terms it is a capsule.

For a cylinder with hemispherical ends,

In a vessel with an aspect ratio of middle cylinder width to radius of 2:1,

In looking at the first equation, the factor PV, in SI units, is in units of (pressurization) energy. For a stored gas, PV is proportional to the mass of gas at a given temperature, thus

So, for example, a typical design for a minimum mass tank to hold helium (as a pressurant gas) on a rocket would use a spherical chamber for a minimum shape constant, carbon fiber for best possible

is hoop stress, or stress in the circumferential direction,

is stress in the longitudinal direction, p is internal gauge pressure, r is the inner radius of the sphere, and t is thickness of the cylinder wall. A vessel can be considered "shallow-walled" if the diameter is at least 10 times (sometimes cited as 20 times) greater than the wall depth.[12] 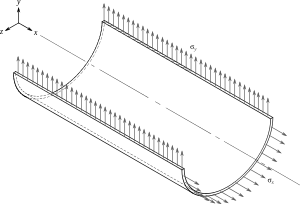 Stress in the cylinder body of a pressure vessel.

For example, the ASME Boiler and Pressure Vessel Code (BPVC) (UG-27) formulas are:[13]

where E is the joint efficient, and all others variables as stated above.

The factor of safety is often included in these formulas as well, in the case of the ASME BPVC this term is included in the material stress value when solving for pressure or thickness.

Wound infinite cylindrical shapes optimally take a winding angle of 54.7 degrees, as this gives the necessary twice the strength in the circumferential direction to the longitudinal.[14]

Pressure vessels are designed to operate safely at a specific pressure and temperature, technically referred to as the "Design Pressure" and "Design Temperature". A vessel that is inadequately designed to handle a high pressure constitutes a very significant safety hazard. Because of that, the design and certification of pressure vessels is governed by design codes such as the ASME Boiler and Pressure Vessel Code in North America, the Pressure Equipment Directive of the EU (PED), Japanese Industrial Standard (JIS), CSA B51 in Canada, Australian Standards in Australia and other international standards like Lloyd's, Germanischer Lloyd, Det Norske Veritas, Société Générale de Surveillance (SGS S.A.), Stoomwezen etc.

Note that where the pressure-volume product is part of a safety standard, any incompressible liquid in the vessel can be excluded as it does not contribute to the potential energy stored in the vessel, so only the volume of the compressible part such as gas is used.