In physics, power is the rate of doing work. It is equivalent to an amount of energy consumed per unit time. In the MKS system, the unit of power is the joule per second (J/s), known as the watt in honor of James Watt, the eighteenth-century developer of the steam engine.

The integral of power over time defines the work performed. Because this integral depends on the trajectory of the point of application of the force and torque, this calculation of work is said to be path dependent.

The same amount of work is done when carrying a load up a flight of stairs whether the person carrying it walks or runs, but more power is needed for running because the work is done in a shorter amount of time. The output power of an electric motor is the product of the torque that the motor generates and the angular velocity of its output shaft. The power involved in moving a vehicle is the product of the traction force of the wheels and the velocity of the vehicle. The rate at which a light bulb converts electrical energy into light and heat is measured in watts—the higher the wattage, the more power, or equivalently the more electrical energy is used per unit time.[1][2]

The dimension of power is energy divided by time. The SI unit of power is the watt (W), which is equal to one joule per second. Other units of power include ergs per second (erg/s), horsepower (hp), metric horsepower (Pferdestärke (PS) or cheval vapeur, CV), and foot-pounds per minute. One horsepower is equivalent to 33,000 foot-pounds per minute, or the power required to lift 550 pounds by one foot in one second, and is equivalent to about 746 watts. Other units include dBm, a relative logarithmic measure with 1 milliwatt as reference; (food) calories per hour (often referred to as kilocalories per hour); Btu per hour (Btu/h); and tons of refrigeration (12,000 Btu/h).

As a simple example, burning a kilogram of coal releases much more energy than does detonating a kilogram of TNT,[3] but because the TNT reaction releases energy much more quickly, it delivers far more power than the coal. If ΔW is the amount of work performed during a period of time of duration Δt, the average power Pavg over that period is given by the formula

It is the average amount of work done or energy converted per unit of time. The average power is often simply called "power" when the context makes it clear.

The instantaneous power is then the limiting value of the average power as the time interval Δt approaches zero.

In the case of constant power P, the amount of work performed during a period of duration T is given by:

In the context of energy conversion, it is more customary to use the symbol E rather than W.

Power in mechanical systems is the combination of forces and movement. In particular, power is the product of a force on an object and the object's velocity, or the product of a torque on a shaft and the shaft's angular velocity.

Mechanical power is also described as the time derivative of work. In mechanics, the work done by a force F on an object that travels along a curve C is given by the line integral:

where x defines the path C and v is the velocity along this path.

If the force F is derivable from a potential (conservative), then applying the gradient theorem (and remembering that force is the negative of the gradient of the potential energy) yields:

where A and B are the beginning and end of the path along which the work was done.

In one dimension, this can be simplified to:

In rotational systems, power is the product of the torque τ and angular velocity ω,

where ω measured in radians per second. The

In fluid power systems such as hydraulic actuators, power is given by

where p is pressure in pascals, or N/m2 and Q is volumetric flow rate in m3/s in SI units.

If a mechanical system has no losses then the input power must equal the output power. This provides a simple formula for the mechanical advantage of the system.

which yields the mechanical advantage

These relations are important because they define the maximum performance of a device in terms of velocity ratios determined by its physical dimensions. See for example gear ratios.

{{#invoke:main|main}} The instantaneous electrical power P delivered to a component is given by

If the component is a resistor with time-invariant voltage to current ratio, then:

is the resistance, measured in ohms. 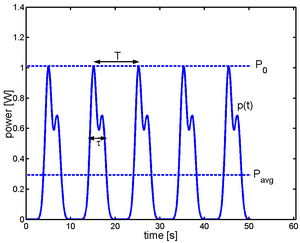 In a train of identical pulses, the instantaneous power is a periodic function of time. The ratio of the pulse duration to the period is equal to the ratio of the average power to the peak power. It is also called the duty cycle (see text for definitions).

In the case of a periodic signal

, like a train of identical pulses, the instantaneous power

is also a periodic function of period

. The peak power is simply defined by:

The peak power is not always readily measurable, however, and the measurement of the average power

is more commonly performed by an instrument. If one defines the energy per pulse as:

then the average power is:

One may define the pulse length

so that the ratios

are equal. These ratios are called the duty cycle of the pulse train.