Mathematically such planes can be described in a number of ways. They can be described in terms of planes and angles of rotation. They can be associated with bivectors from geometric algebra. They are related to the eigenvalues and eigenvectors of a rotation matrix. And in particular dimensions they are related to other algebraic and geometric properties, which can then be generalised to other dimensions.

For this article, all planes are planes through the origin, that is they contain the zero vector. Such a plane in n-dimensional space is a two-dimensional linear subspace of the space. It is completely specified by any two non-zero and non-parallel vectors that lie in the plane, that is by any two vectors a and b, such that

where ∧ is the exterior product from exterior algebra or geometric algebra (in three dimensions the cross product can be used). More precisely, the quantity a ∧ b is the bivector associated with the plane specified by a and b, and has magnitude |a| |b| sin φ, where φ is the angle between the vectors; hence the requirement that the vectors be non-zero and non-parallel.[2]

If the bivector a ∧ b is written B, then the condition that a point lies on the plane associated with B is simply

This is true in all dimensions, and can be taken as the definition on the plane. In particular, from the properties of the exterior product it is satisfied by both a and b, and so by any vector of the form

with λ and μ real numbers. As λ and μ range over all real numbers, c ranges over the whole plane, so this can be taken as another definition of the plane.

planes of rotation, where n is the dimension. The maximum number of planes up to eight dimensions is shown in this table:

When a rotation has multiple planes of rotation they are always orthogonal to each other, with only the origin in common. This is a stronger condition than to say the planes are at right angles; it instead means that the planes have no nonzero vectors in common, and that every vector in one plane is orthogonal to every vector in the other plane. This can only happen in four or more dimensions. In two dimensions there is only one plane, while in three dimensions all planes have at least one nonzero vector in common, along their line of intersection.[4]

In more than three dimensions planes of rotation are not always unique. For example the negative of the identity matrix in four dimensions (the central inversion),

describes a rotation in four dimensions in which every plane through the origin is a plane of rotation through an angle π, so any pair of orthogonal planes generates the rotation. But for a general rotation it is at least theoretically possible to identify a unique set of orthogonal planes, in each of which points are rotated through an angle, so the set of planes and angles fully characterise the rotation.[5]

In two-dimensional space there is only one plane of rotation, the plane of the space itself. In a Cartesian coordinate system it is the Cartesian plane, in complex numbers it is the complex plane. Any rotation therefore is of the whole plane, i.e. of the space, keeping only the origin fixed. It is specified completely by the signed angle of rotation, in the range for example −π to π. So if the angle is θ the rotation in the complex plane is given by Euler's formula:

while the rotation in a Cartesian plane is given by the 2×2 rotation matrix: 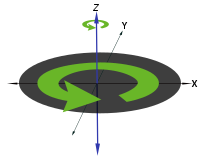 A three-dimensional rotation, with an axis of rotation along the z-axis and a plane of rotation in the xy-plane

In three-dimensional space there are an infinite number of planes of rotation, only one of which is involved in any given rotation. That is for a general rotation there is precisely one plane which is associated with it or which the rotation takes place in. The only exception is the trivial rotation, corresponding to the identity matrix, in which no rotation takes place.

In any rotation in three dimensions there is always a fixed axis, the axis of rotation. The rotation can described by giving this axis, with the angle through which the rotation turns about it; this is the axis angle representation of a rotation. The plane of rotation is the plane orthogonal to this axis, so the axis is a surface normal of the plane. The rotation then rotates this plane through the same angle as it rotates around the axis, that is everything in the plane rotates by the same angle about the origin.

One example is shown in the diagram, where the rotation takes place about the z-axis. The plane of rotation is the xy-plane, so everything in that plane it kept in the plane by the rotation. This could be described by a matrix like the following, with the rotation being through an angle θ (about the axis or in the plane):

The Earth showing its axis and plane of rotation, both inclined relative to the plane and perpendicular of Earth's orbit

In two and three dimensions all rotations are simple, in that they have only one plane of rotation. Only in four and more dimensions are there rotations that are not simple rotations. In particular in four dimensions there are also double and isoclinic rotations.

In a double rotation there are two planes of rotation, no fixed planes, and the only fixed point is the origin. The rotation can be said to take place in both planes of rotation, as points in them are rotated within the planes. These planes are orthogonal, that is they have no vectors in common so every vector in one plane is at right angles to every vector in the other plane. The two rotation planes span four-dimensional space, so every point in the space can be specified by two points, one on each of the planes.

A projection of a tesseract with an isoclinic rotation.

A special case of the double rotation is when the angles are equal, that is if α = β ≠ 0. This is called an isoclinic rotation, and it differs from a general double rotation in a number of ways. For example in an isoclinic rotations all non-zero points rotate through the same angle, α. Most importantly the planes of rotation are not uniquely identified. There are instead an infinite number of pairs of orthogonal planes that can be treated as planes of rotation. For example any point can be taken, and the plane it rotates in together with the plane orthogonal to it can be used as two planes of rotation.[8]

so the complexity quickly increases with more than four dimensions and categorising rotations as above becomes too complex to be practical, but some observations can be made.

In n even dimensions (n = 2, 4, 6...) there are up to n / 2 planes of rotation span the space, so a general rotation rotates all points except the origin which is the only fixed point. In n odd dimensions (n = 3, 5, 7, ...) there are (n − 1) / 2 planes and angles of rotation, the same as the even dimension one lower. These do not span the space, but leave a line which does not rotate – like the axis of rotation in three dimensions, except rotations do not take place about this line but in multiple planes orthogonal to it.[1]

The examples given above were chosen to be clear and simple examples of rotations, with planes generally parallel to the coordinate axes in three and four dimensions. But this is not generally the case: planes are not usually parallel to the axes, and the matrices cannot simply be written down. In all dimensions the rotations are fully described by the planes of rotation and their associated angles, so it is useful to be able to determine them, or at least find ways to describe them mathematically.

A reflection in n dimensions is specified by a vector perpendicular to the (n − 1)-dimensional subspace. To generate simple rotations only reflections that fix the origin are needed, so the vector does not have a position, just direction. It does also not matter which way it is facing: it can be replaced with its negative without changing the result. Similarly unit vectors can be used to simplify the calculations.

So the reflection in a (n − 1)-dimensional space is given by the unit vector perpendicular to it, m, thus:

where the product is the geometric product from geometric algebra.

If x' is reflected in another, distinct, (n − 1)-dimensional space, described by a unit vector n perpendicular to it, the result is

The quantity mn is a rotor, and nm is its inverse as

So the rotation can be written

The plane of rotation is the plane containing m and n, which must be distinct otherwise the reflections are the same and no rotation takes place. As either vector can be replaced by its negative the angle between them can always be acute, or at most π/2. The rotation is through twice the angle between the vectors, up to π or a half-turn. The sense of the rotation is to rotate from m towards n: the geometric product is not commutative so the product nm is the inverse rotation, with sense from n to m.

Bivectors are quantities from geometric algebra, clifford algebra and the exterior algebra, which generalise the idea of vectors into two dimensions. As vectors are to lines, so are bivectors to planes. So every plane (in any dimension) can be associated with a bivector, and every simple bivector is associated with a plane. This makes them a good fit for describing planes of rotation.

Every rotation plane in a rotation has a simple bivector associated with it. This is parallel to the plane and has magnitude equal to the angle of rotation in the plane. These bivectors are summed to produce a single, generally non-simple, bivector for the whole rotation. This can generate a rotor through the exponential map, which can be used to rotate an object.

Bivectors are related to rotors through the exponential map (which applied to bivectors generates rotors and rotations using De Moivre's formula). In particular given any bivector B the rotor associated with it is

This is a simple rotation if the bivector is simple, a more general rotation otherwise. When squared,

Examples include the two rotations in four dimensions given above. The simple rotation in the zw-plane by an angle θ has bivector e34θ, a simple bivector. The double rotation by α and β in the xy-plane and zw-planes has bivector e12α + e34β, the sum of two simple bivectors e12α and e34β which are parallel to the two planes of rotation and have magnitudes equal to the angles of rotation.

The planes of rotations for a particular rotation using the eigenvalues. Given a general rotation matrix in n dimensions its characteristic equation has either one (in odd dimensions) or zero (in even dimensions) real roots. The other roots are in complex conjugate pairs, exactly

such pairs. These correspond to the planes of rotation, the eigenplanes of the matrix, which can be calculated using algebraic techniques. In addition arguments of the complex roots are the magnitudes of the bivectors associated with the planes of rotations. The form of the characteristic equation is related to the planes, making it possible to relate its algebraic properties like repeated roots to the bivectors, where repeated bivector magnitudes have particular geometric interpretations.[1][12]