{{ safesubst:#invoke:Unsubst||$N=Unreferenced |date=__DATE__ |$B= {{#invoke:Message box|ambox}} }} In mathematics, a piecewise-defined function (also called a piecewise function or a hybrid function) is a function which is defined by multiple sub functions, each sub function applying to a certain interval of the main function's domain (a sub-domain). Piecewise is actually a way of expressing the function, rather than a characteristic of the function itself, but with additional qualification, it can describe the nature of the function. For example, a piecewise polynomial function: a function that is a polynomial on each of its sub-domains, but possibly a different one on each.

Piecewise functions are defined using the common functional notation, where the body of the function is an array of functions and associated subdomains. Crucially, in most settings, there must only be a finite number of subdomains, each of which must be an interval, in order for the overall function to be called "piecewise". For example, consider the piecewise definition of the absolute value function: 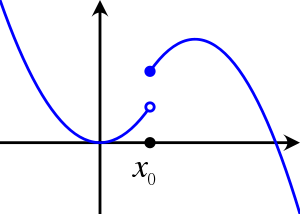 A piecewise function comprising different quadratic functions on either side of

A piecewise function is continuous on a given interval if the following conditions are met: