On the Sphere and Cylinder

A page from "On the Sphere and Cylinder" in latin

On the Sphere and Cylinder (Greek: Περὶ σφαίρας καὶ κυλίνδρου{{#invoke:Category handler|main}}) is a work that was published by Archimedes in two volumes c. 225 BC.[1] It most notably details how to find the surface area of a sphere and the volume of the contained ball and the analogous values for a cylinder, and was the first to do so.[2] 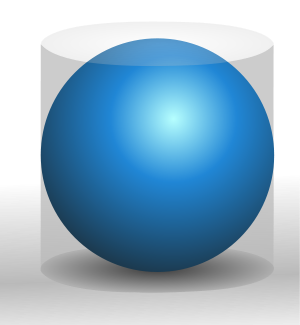 and that the volume of the same is:

Archimedes was particularly proud of this latter result, and so he asked for a sketch of a sphere inscribed in a cylinder to be inscribed on his grave—since h=2r, he had shown that both the volume and the surface area of the sphere were two-thirds that of the cylinder. Later, Roman philosopher Marcus Tullius Cicero discovered the tomb, which had been overgrown by surrounding vegetation.[4]

The argument Archimedes used to prove the formula for the volume of a ball was rather involved in its geometry, and many modern textbooks have a simplified version using the concept of a limit, which, of course, did not exist in Archimedes' time. Archimedes used an inscribed half-polygon in a semicircle, then rotated both to create a conglomerate of frustums in a sphere, of which he then determined the volume.[5]

It seems that this is not the original method Archimedes used to derive this result, but the best formal argument available to him in the Greek mathematical tradition. His original method likely involved a clever use of levers.[6] A palimpsest rediscovered in the 19th century contained many of Archimedes works, including The Method of Mechanical Theorems, in which he describes a method to determine volumes which involves balances, centers of mass and infinitesimal slices.[7]