Nondimensionalization is the partial or full removal of units from an equation involving physical quantities by a suitable substitution of variables. This technique can simplify and parameterize problems where measured units are involved. It is closely related to dimensional analysis. In some physical systems, the term scaling is used interchangeably with nondimensionalization, in order to suggest that certain quantities are better measured relative to some appropriate unit. These units refer to quantities intrinsic to the system, rather than units such as SI units. Nondimensionalization is not the same as converting extensive quantities in an equation to intensive quantities, since the latter procedure results in variables that still carry units.

Nondimensionalization can also recover characteristic properties of a system. For example, if a system has an intrinsic resonance frequency, length, or time constant, nondimensionalization can recover these values. The technique is especially useful for systems that can be described by differential equations. One important use is in the analysis of control systems. One of the simplest characteristic units is the doubling time of a system experiencing exponential growth, or conversely the half-life of a system experiencing exponential decay; a more natural pair of characteristic units is mean age/mean lifetime, which correspond to base e rather than base 2.

Although nondimensionalization is well adapted for these problems, it is not restricted to them. An example of a non-differential-equation application is dimensional analysis; another example is normalization in statistics.

Suppose a pendulum is swinging with a particular period T. For such a system, it is advantageous to perform calculations relating to the swinging relative to T. In some sense, this is normalizing the measurement with respect to the period.

Measurements made relative to an intrinsic property of a system will apply to other systems which also have the same intrinsic property. It also allows one to compare a common property of different implementations of the same system. Nondimensionalization determines in a systematic manner the characteristic units of a system to use, without relying heavily on prior knowledge of the system's intrinsic properties (one should not confuse characteristic units of a system with natural units of nature). In fact, nondimensionalization can suggest the parameters which should be used for analyzing a system. However, it is necessary to start with an equation that describes the system appropriately.

To nondimensionalize a system of equations, one must do the following:

The last three steps are usually specific to the problem where nondimensionalization is applied. However, almost all systems require the first two steps to be performed.

As an illustrative example, consider a first order differential equation with constant coefficients:

Suppose for simplicity that a certain system is characterized by two variables - a dependent variable x and an independent variable t, where x is a function of t. Both x and t represent quantities with units. To scale these two variables, assume there are two intrinsic units of measurement xc and tc with the same units as x and t respectively, such that these conditions hold:

There are no restrictions on the variable names used to replace "x" and "t". However, they are generally chosen so that it is convenient and intuitive to use for the problem at hand. For example, if "x" represented mass, the letter "m" might be an appropriate symbol to represent the dimensionless mass quantity.

In this article, the following conventions have been used:

The dimensionless differential operators with respect to the independent variable becomes

If a system has a forcing function f(t), then

Hence, the new forcing function F is made to be dependent on the dimensionless quantity τ.

Let us consider the differential equation for a first order system:

The derivation of the characteristic units for this system gives

A second order system has the form

Replace the variables x and t with their scaled quantities. The equation becomes

This new equation is not dimensionless, although all the variables with units are isolated in the coefficients. Dividing by the coefficient of the highest ordered term, the equation becomes

Now it is necessary to determine the quantities of xc and tc so that the coefficients become normalized. Since there are two free parameters, at most only two coefficients can be made to equal unity.

Both substitutions are valid. However, for pedagogical reasons, the latter substitution is used for second order systems. Choosing this substitution allows xc to be determined by normalizing the coefficient of the forcing function:

The coefficient of the first order term is unitless. Define

The factor 2 is present so that the solutions can be parameterized in terms of ζ. In the context of mechanical or electrical systems, ζ is known as the damping ratio, and is an important parameter required in the analysis of control systems. 2ζ is also known as the linewidth of the system. The result of the definition is the universal oscillator equation.

The general n-th order linear differential equation with constant coefficients has the form:

The function f(t) is known as the forcing function.

If the differential equation only contains real (not complex) coefficients, then the properties of such a system behaves as a mixture of first and second order systems only. This is because the roots of its characteristic polynomial are either real, or complex conjugate pairs. Therefore, understanding how nondimensionalization applies to first and second ordered systems allows the properties of higher order systems to be determined through superposition.

The number of free parameters in a nondimensionalized form of a system increases with its order. For this reason, nondimensionalization is rarely used for higher order differential equations. The need for this procedure has also been reduced with the advent of symbolic computation.

A variety of systems can be approximated as either first or second order systems. These include mechanical, electrical, fluidic, caloric, and torsional systems. This is because the fundamental physical quantities involved within each of these examples are related through first and second order derivatives. 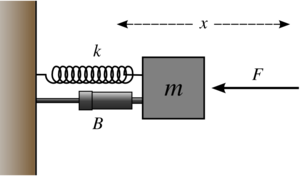 A mass attached to a spring and a damper.

Suppose we have a mass attached to a spring and a damper, which in turn are attached to a wall, and a force acting on the mass along the same line.

Suppose the applied force is a sinusoid F = F0 cos(ωt), the differential equation that describes the motion of the block is

Nondimensionalizing this equation the same way as described under second order system yields several characteristics of the system.

and the dimensionless variable 2ζ corresponds to the linewidth of the system. ζ itself is the damping ratio.

For a series RC attached to a voltage source

For a series configuration of R,C,L components where Q is the charge in the system

The first variable corresponds to the maximum charge stored in the circuit. The resonance frequency is given by the reciprocal of the characteristic time. The last expression is the linewidth of the system. The Ω can be considered as a normalized forcing function frequency.

Since there are no general methods of solving nonlinear differential equations, each case has to be considered on an individual basis when nondimensionalizing.

The modulus square of the wavefunction |ψ|^2 represents probability, which is in a sense already dimensionless and normalized. Therefore, there is no need to nondimensionalize the wavefunction. However, it should be rewritten as a function of a dimensionless variable. Furthermore, the variable x has units of length. Hence substitute

To make the term in front of χ² unitless, set

Hence, the fully nondimensionalized equation is

{{#invoke:main|main}} In statistics, the analogous process is usually dividing a difference (a distance) by a scale factor (a measure of statistical dispersion), which yields a dimensionless number, which is called normalization. Most often, this is dividing errors or residuals by the standard deviation or sample standard deviation, respectively, yielding standard scores and studentized residuals.