In automata theory, a finite state machine is called a deterministic finite automaton (DFA), if

Using the subset construction algorithm, each NFA can be translated to an equivalent DFA, i.e. a DFA recognizing the same formal language.[1] Like DFAs, NFAs only recognize regular languages. Sometimes the term NFA is used in a narrower sense, meaning an automaton that properly violates an above restriction, i.e. that is not a DFA.

NFAs were introduced in 1959 by Michael O. Rabin and Dana Scott,[2] who also showed their equivalence to DFAs.

An NFA, similar to a DFA, consumes a string of input symbols. For each input symbol, it transitions to a new state until all input symbols have been consumed. Unlike a DFA, it is non-deterministic, i.e., for some state and input symbol, the next state may be one of two or more possible states. Thus, in the formal definition, the next state is an element of the power set of the states, which is a set of states to be considered at once. The notion of accepting an input is similar to that for the DFA. When the last input symbol is consumed, the NFA accepts if and only if there is some set of transitions that will take it to an accepting state. Equivalently, it rejects, if, no matter what transitions are applied, it would not end in an accepting state.

In words, the first condition says that the machine starts in the start state q0. The second condition says that given each character of string w, the machine will transition from state to state according to the transition function Δ. The last condition says that the machine accepts w if the last input of w causes the machine to halt in one of the accepting states. In order for w being accepted by M it is not required that every state sequence ends in an accepting state, it is sufficient if one does. Otherwise, i.e. if it is impossible at all to get from q0 to a state from F by following w, it is said that the automaton rejects the string. The set of strings M accepts is the language recognized by M and this language is denoted by L(M).

The state diagram for M. It is not deterministic since in state p reading a 1 can lead to p or to q.

Let M be a NFA, with a binary alphabet, that determines if the input ends with a 1.

Note that Δ(p,1) has more than one state therefore M is nondeterministic. The language of M can be described by the regular language given by the regular expression (0|1)*1. Some possible state sequences for the input word "1011" are:

The word is accepted by M since state sequence 3 satisfies the above definition; it doesn't matter that sequences 1 and 2 fail to do so. In contrast, the word "10" is rejected by M, since there is no way to reach the only accepting state, q, by reading the final 0 symbol or by an ε-transition.

For each NFA, there is a DFA such that both recognize the same formal language. The DFA can be constructed using the powerset construction. It is important in theory because it establishes that NFAs, despite their additional flexibility, are unable to recognize any language that cannot be recognized by some DFA. It is also important in practice for converting easier-to-construct NFAs into more efficiently executable DFAs. However, if the NFA has n states, the resulting DFA may have up to 2n states, an exponentially larger number, which sometimes makes the construction impractical for large NFAs. 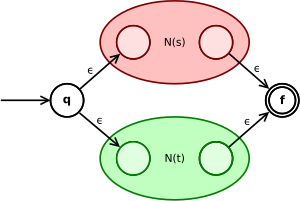 Composed NFA accepting the union of the languages of some given NFAs N(s) and N(t). For an input word w in the language union, the composed automaton follows an ε-transition from q to the start state (left colored circle) of an appropriate subautomaton — N(s) or N(t) — which, by following w, may reach an accepting state (right colored circle); from there, state f can be reached by another ε-transition. Due to the ε-transitions, the composed NFA is properly nondeterministic even if both N(s) and N(t) were DFAs; vice versa, constructing a DFA for the union language (even of two DFAs) is much more complicated.

NFAs are said to be closed under a (binary/unary) operator if NFAs recognize the languages that are obtained by applying the operation on the NFA recognizable languages. The NFAs are closed under the following operations.

NFAs can be constructed from any regular expression using Thompson's construction algorithm.

The machine starts in the specified initial state and reads in a string of symbols from its alphabet. The automaton uses the state transition function Δ to determine the next state using the current state, and the symbol just read or the empty string. However, "the next state of an NFA depends not only on the current input event, but also on an arbitrary number of subsequent input events. Until these subsequent events occur it is not possible to determine which state the machine is in".[3] If, when the automaton has finished reading, it is in an accepting state, the NFA is said to accept the string, otherwise it is said to reject the string.

The set of all strings accepted by an NFA is the language the NFA accepts. This language is a regular language.[4]

For every NFA a deterministic finite automaton (DFA) can be found that accepts the same language. Therefore it is possible to convert an existing NFA into a DFA for the purpose of implementing a (perhaps) simpler machine. This can be performed using the powerset construction, which may lead to an exponential rise in the number of necessary states. A formal proof of the powerset construction is given here.

There are many ways to implement a NFA:

NFAs and DFAs are equivalent in that if a language is recognized by an NFA, it is also recognized by a DFA and vice versa. The establishment of such equivalence is important and useful. It is useful because constructing an NFA to recognize a given language is sometimes much easier than constructing a DFA for that language. It is important because NFAs can be used to reduce the complexity of the mathematical work required to establish many important properties in the theory of computation. For example, it is much easier to prove closure properties of regular languages using NFAs than DFAs.