{{#invoke:Hatnote|hatnote}} Nicolas Bourbaki is the collective pseudonym under which a group of (mainly French) 20th-century mathematicians, with the aim of reformulating mathematics on an extremely abstract and formal but self-contained basis, wrote a series of books beginning in 1935. With the goal of grounding all of mathematics on set theory, the group strove for rigour and generality. Their work led to the discovery of several concepts and terminologies still used, and influenced modern branches of mathematics. 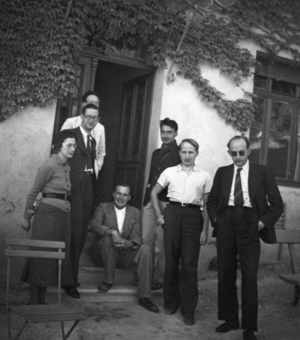 Bourbaki's main work is the Elements of Mathematics (Éléments de mathématique) series. This series aims to be a completely self-contained treatment of the core areas of modern mathematics. Assuming no special knowledge of mathematics, it tries to take up mathematics from the very beginning, proceed axiomatically and give complete proofs.

The book Variétés différentielles et analytiques was a fascicule de résultats, that is, a summary of results, on the theory of manifolds, rather than a worked-out exposition. A final volume IX on spectral theory (Théories spectrales) from 1983 marked the presumed end of the publishing project; but a further commutative algebra fascicle was produced in 1998 and the eighth chapter of Algèbre was published in 2012.

Besides the Éléments de mathématique series, lectures from the Séminaire Bourbaki also have been periodically published in monograph form since 1948.

Influence on mathematics in general

Notations introduced by Bourbaki include the symbol

The emphasis on rigour may be seen as a reaction to the work of Henri Poincaré,[1] who stressed the importance of free-flowing mathematical intuition, at a cost of completeness in presentation. The impact of Bourbaki's work initially was great on many active research mathematicians world-wide. As an example here is a quotation from the great number-theorist Emil Artin (Bull.AMS 1953, 474-479): "Our time is witnessing the creation of a monumental work: an exposition of the whole of present day mathematics. Moreover this exposition is done in such a way that the common bond between the various branches of mathematics become clearly visible ..."

It provoked some hostility, too, mostly on the side of classical analysts; they approved of rigour but not of high abstraction. Around 1950, also, some parts of geometry were still not fully axiomatic — in less prominent developments, one way or another, these were brought into line with the new foundational standards, or quietly dropped. This led to a gulf with the way theoretical physics is practiced.[2]

On the other hand, the approach and rigour advocated by Bourbaki have permeated the current mathematical practices to such extent that the task undertaken was completed.[4] This is particularly true for the less applied parts of mathematics.

The Bourbaki seminar series founded in post-WWII Paris continues; it has been going on since 1948, and contains more than 1000 items. It is an important source of survey articles, with sketches (or sometimes improvements) of proofs. The topics range through all branches of mathematics, including sometimes theoretical physics. The idea is that the presentation should be on the level of specialists, but should be tailored to an audience which is not specialized in the particular field.

Accounts of the early days vary, but original documents have now come to light. The founding members were all connected to the École Normale Supérieure in Paris and included Henri Cartan, Claude Chevalley, Jean Coulomb, Jean Delsarte, Jean Dieudonné, Charles Ehresmann, René de Possel, Szolem Mandelbrojt and André Weil. There was a preliminary meeting, towards the end of 1934.[5] Jean Leray and Paul Dubreil were present at the preliminary meeting but dropped out before the group actually formed. Other notable participants in later days were Hyman Bass, Laurent Schwartz, Jean-Pierre Serre, Alexander Grothendieck, Jean-Louis Koszul, Samuel Eilenberg, Serge Lang and Roger Godement.

The original goal of the group had been to compile an improved mathematical analysis text; it was soon decided that a more comprehensive treatment of all of mathematics was necessary. There was no official status of membership, and at the time the group was quite secretive and also fond of supplying disinformation. Regular meetings were scheduled (totalling about 4 weeks a year), during which the group would discuss vigorously every proposed line of every book. Members had to resign by age 50.[6]

The atmosphere in the group can be illustrated by an anecdote told by Laurent Schwartz. Dieudonné regularly and spectacularly threatened to resign unless topics were treated in their logical order, and after a while others played on this for a joke. Godement's wife wanted to see Dieudonné announcing his resignation, and so on one occasion while she was there Schwartz deliberately brought up again the question of permuting the order in which measure theory and topological vector spaces were to be handled, to precipitate a guaranteed crisis.

The name "Bourbaki" refers to a French general, Charles Denis Bourbaki;[7] it was adopted by the group as a reference to a student anecdote about a hoax mathematical lecture, and also possibly to a statue.[8]

Appraisal of the Bourbaki perspective

The underlying drive, in Weil and Chevalley at least, was the perceived need for French mathematics to absorb the best ideas of the Göttingen school, particularly Hilbert and the modern algebra school of Emmy Noether, Artin and van der Waerden. It is fairly clear that the Bourbaki point of view, while encyclopedic, was never intended as neutral. Quite the opposite: it was more a question of trying to make a consistent whole out of some enthusiasms, for example for Hilbert's legacy, with emphasis on formalism and axiomatics. But always through a transforming process of reception and selection — their ability to sustain this collective, critical approach has been described as "something unusual".[9]

The following is a list of some of the criticisms commonly made of the Bourbaki approach. Pierre Cartier, a Bourbaki member 1955–1983, commented explicitly on several of these points:[10] ...essentially no analysis beyond the foundations: nothing about partial differential equations, nothing about probability. There is also nothing about combinatorics, nothing about algebraic topology, nothing about concrete geometry. And Bourbaki never seriously considered logic. Dieudonné himself was very vocal against logic. Anything connected with mathematical physics is totally absent from Bourbaki's text.

Furthermore, Bourbaki make no use of pictures in their presentation. Pierre Cartier, in the article cited above, is quoted as later saying The Bourbaki were Puritans, and Puritans are strongly opposed to pictorial representations of truths of their faith. In general, Bourbaki has been criticized for reducing geometry as a whole to abstract algebra and soft analysis.[16]

Dieudonné as speaker for Bourbaki

Public discussion of, and justification for, Bourbaki's thoughts has in general been through Jean Dieudonné (who initially was the 'scribe' of the group) writing under his own name. In a survey of le choix bourbachique written in 1977, he did not shy away from a hierarchical development of the 'important' mathematics of the time.

He also wrote extensively under his own name: nine volumes on analysis, perhaps in belated fulfillment of the original project or pretext; and also on other topics mostly connected with algebraic geometry. While Dieudonné could reasonably speak on Bourbaki's encyclopedic tendency and tradition, it may be doubted—after innumerable frank tais-toi, Dieudonné! ("Hush, Dieudonné!") remarks at the meetings—whether all others agreed with him about mathematical writing and research. In particular Serre has often championed greater attention to problem-solving, within number theory especially, not an area treated in the main Bourbaki texts.

Dieudonné stated the view that most workers in mathematics were doing ground-clearing work, in order that a future Riemann could find the way ahead intuitively open. He pointed to the way the axiomatic method can be used as a tool for problem-solving, for example by Alexander Grothendieck. Others found him too close to Grothendieck to be an unbiased observer. Comments in Pál Turán's 1970 speech on the award of a Fields Medal to Alan Baker about theory-building and problem-solving were a reply from the traditionalist camp at the next opportunity[17]Template:Failed verification, Grothendieck having received the previous Fields Medal in absentia in 1966.

While several of Bourbaki's books have become standard references in their fields, some have felt that the austere presentation makes them unsuitable as textbooks.[18] The books' influence may have been at its strongest when few other graduate-level texts in current pure mathematics were available, between 1950 and 1960.[19]

In the longer term, the manifesto of Bourbaki has had a definite and deep influence. In secondary education the new math movement corresponded to teachers influenced by Bourbaki. In France the change was secured by the Lichnerowicz Commission.[20]

The influence on graduate education in pure mathematics is perhaps most noticeable in the treatment now current of Lie groups and Lie algebras. Dieudonné at one point said 'one can do nothing serious without them', for which he was reproached; but the change in Lie theory to its everyday usage owes much to the type of exposition Bourbaki championed. Beforehand Jacques Hadamard despaired of ever getting a clear idea of it.{{ safesubst:#invoke:Unsubst||date=__DATE__ |$B= {{#invoke:Category handler|main}}{{#invoke:Category handler|main}}[citation needed] }}Template:Vague