{{#invoke:Hatnote|hatnote}} In abstract algebra, a branch of mathematics, a monoid is an algebraic structure with a single associative binary operation and an identity element. Monoids are studied in semigroup theory as they are semigroups with identity. Monoids occur in several branches of mathematics; for instance, they can be regarded as categories with a single object. Thus, they capture the idea of function composition within a set. Monoids are also commonly used in computer science, both in its foundational aspects and in practical programming. The set of strings built from a given set of characters is a free monoid. The transition monoid and syntactic monoid are used in describing finite state machines, whereas trace monoids and history monoids provide a foundation for process calculi and concurrent computing. Some of the more important results in the study of monoids are the Krohn–Rhodes theorem and the star height problem. The history of monoids, as well as a discussion of additional general properties, are found in the article on semigroups.

Suppose that S is a set and • is some binary operation S × S → S, then S with • is a monoid if it satisfies the following two axioms:

Depending on the context, the symbol for the binary operation may be omitted, so that the operation is denoted by juxtaposition; for example, the monoid axioms may be written

. This notation does not imply that it is numbers being multiplied.

A submonoid of a monoid (M, •) is a subset N of M that is closed under the monoid operation and contains the identity element e of M.[2][3] Symbolically, N is a submonoid of M if N ⊆ M, x • y ∈ N whenever x, y ∈ N, and e ∈ N. N is thus a monoid under the binary operation inherited from M.

A subset S of M is said to be a generator of M if M is the smallest set containing S that is closed under the monoid operation, or equivalently M is the result of applying the finitary closure operator to S. If there is a generator of M that has finite cardinality, then M is said to be finitely generated. Not every set S will generate a monoid, as the generated structure may lack an identity element.

A monoid for which the operation is commutative for some, but not all elements is a trace monoid; trace monoids commonly occur in the theory of concurrent computation.

Moreover, f can be considered as a function on the points

Multiplication of elements in

is then given by function composition.

Note also that when

then the function f is a permutation of

and gives the unique cyclic group of order n.

From the definition of a monoid, one can show that the identity element e is unique. Then, for any x, one can set x0 = e and the rule of powers is still true with nonnegative exponents.

It is possible to define invertible elements: an element x is called invertible if there exists an element y such that x • y = e and y • x = e. The element y is called the inverse of x. If y and z are inverses of x, then by associativity y = (zx)y = z(xy) = z. Thus inverses, if they exist, are unique.[8]

If y is the inverse of x, one can define negative powers of x by setting x−1 = y and x−n = y • ... • y (n times) for n > 1. And the rule of exponents is still verified for all n, p rational integers. This is why the inverse of x is usually written x−1. The set of all invertible elements in a monoid M, together with the operation •, forms a group. In that sense, every monoid contains a group (possibly only the trivial group consisting of only the identity).

However, not every monoid sits inside a group. For instance, it is perfectly possible to have a monoid in which two elements a and b exist such that a • b = a holds even though b is not the identity element. Such a monoid cannot be embedded in a group, because in the group we could multiply both sides with the inverse of a and would get that b = e, which isn't true. A monoid (M, •) has the cancellation property (or is cancellative) if for all a, b and c in M, a • b = a • c always implies b = c and b • a = c • a always implies b = c. A commutative monoid with the cancellation property can always be embedded in a group via the Grothendieck construction. That's how the additive group of the integers (a group with operation +) is constructed from the additive monoid of natural numbers (a commutative monoid with operation + and cancellation property). However, a non-commutative cancellative monoid need not be embeddable in a group.

It turns out that requiring the cancellative property in a monoid is not required to perform the Grothendieck construction – commutativity is sufficient. However, if the original monoid has an absorbing element then its Grothendieck group is the trivial group. Hence the homomorphism is, in general, not injective.

In the opposite direction, a zerosumfree monoid is an additive monoid in which a+a=0 implies a=0:[9] equivalently, that no element other than zero has an additive inverse.

{{#invoke:main|main}} Let M be a monoid, with the binary operation denoted by • and the identity element denoted by e. Then a (left) M-act (or left act over M) is a set X together with an operation ⋅ : M × X → X which is compatible with the monoid structure as follows:

This is the analogue in monoid theory of a (left) group action. Right M-acts are defined in a similar way. A monoid with an act is also known as an operator monoid. Important examples include transition systems of semiautomata. A transformation semigroup can be made into an operator monoid by adjoining the identity transformation. 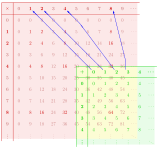 where eM and eN are the identities on M and N respectively. Monoid homomorphisms are sometimes simply called monoid morphisms.

Monoids may be given a presentation, much in the same way that groups can be specified by means of a group presentation. One does this by specifying a set of generators Σ, and a set of relations on the free monoid Σ∗. One does this by extending (finite) binary relations on Σ∗ to monoid congruences, and then constructing the quotient monoid, as above.

Given a binary relation R ⊂ Σ∗ × Σ∗, one defines its symmetric closure as R ∪ R−1. This can be extended to a symmetric relation E ⊂ Σ∗ × Σ∗ by defining x ~E y if and only if x = sut and y = svt for some strings u, v, s, t ∈ Σ∗ with (u,v) ∈ R ∪ R−1. Finally, one takes the reflexive and transitive closure of E, which is then a monoid congruence.

In the typical situation, the relation R is simply given as a set of equations, so that

is the equational presentation for the bicyclic monoid, and

for integers i, j, k, as the relations show that ba commutes with both a and b.

Template:Group-like structures Monoids can be viewed as a special class of categories. Indeed, the axioms required of a monoid operation are exactly those required of morphism composition when restricted to the set of all morphisms whose source and target is a given object.[10] That is,

A monoid is, essentially, the same thing as a category with a single object.

More precisely, given a monoid (M, •), one can construct a small category with only one object and whose morphisms are the elements of M. The composition of morphisms is given by the monoid operation •.

In this sense, category theory can be thought of as an extension of the concept of a monoid. Many definitions and theorems about monoids can be generalised to small categories with more than one object. For example, a quotient of a category with one object is just a quotient monoid.

Monoids, just like other algebraic structures, also form their own category, Mon, whose objects are monoids and whose morphisms are monoid homomorphisms.[10]

There is also a notion of monoid object which is an abstract definition of what is a monoid in a category. A monoid object in Set is just a monoid.

In computer science, many abstract data types can be endowed with a monoid structure. In a common pattern, a sequence of elements of a monoid is "folded" or "accumulated" to produce a final value. For instance, many iterative algorithms need to update some kind of "running total" at each iteration; this pattern may be elegantly expressed by a monoid operation. Alternatively, the associativity of monoid operations ensures that the operation can be parallelized by employing a prefix sum or similar algorithm, in order to utilize multiple cores or processors efficiently.

Given a sequence of values of type M with identity element

, the fold operation is defined as follows:

In addition, any data structure can be 'folded' in a similar way, given a serialization of its elements. For instance, the result of "folding" a binary tree might differ depending on pre-order vs. post-order tree traversal.

A continuous monoid is an ordered commutative monoid in which every directed set has a least upper bound compatible with the monoid operation:

These two concepts are closely related: a continuous monoid is a complete monoid in which the infinitary sum may be defined as