{{#invoke:Hatnote|hatnote}} In category theory, a branch of mathematics, a monad (also triple, triad, standard construction and fundamental construction)[1] is an (endo-)functor, together with two natural transformations. Monads are used in the theory of pairs of adjoint functors, and they generalize closure operators on partially ordered sets to arbitrary categories.

are a pair of adjoint functors, with

is a monad. Therefore, a monad is an endofunctor. If

are inverse functors, the corresponding monad is the identity functor. In general, adjunctions are not equivalences — they relate categories of different natures. The monad theory matters as part of the effort to capture what it is that adjunctions 'preserve'. The other half of the theory, of what can be learned likewise from consideration of

, is discussed under the dual theory of comonads.

The monad axioms can be seen at work in a simple example: let

we can take the free group functor.

This means that the monad

and returns the underlying set of the free group

. In this situation, we are given two natural morphisms:

by including any set

in the natural way, as strings of length 1. Further,

can be made out of a natural concatenation or 'flattening' of 'strings of strings'. This amounts to two natural transformations

They will satisfy some axioms about identity and associativity that result from the adjunction properties.

Those axioms are formally similar to the monoid axioms. They are taken as the definition of a general monad (not assumed a priori to be connected to an adjunction) on a category.

If we specialize to categories arising from partially ordered sets

(with a single morphism from

), then the formalism becomes much simpler: adjoint pairs are Galois connections and monads are closure operators.

Every monad arises from some adjunction, in fact typically from many adjunctions. Two constructions introduced below, the Kleisli category and the category of Eilenberg-Moore algebras, are extremal solutions of the problem of constructing an adjunction that gives rise to a given monad.

The example about free groups given above can be generalized to any type of algebra in the sense of a variety of algebras in universal algebra. Thus, every such type of algebra gives rise to a monad on the category of sets. Importantly, the algebra type can be recovered from the monad (as the category of Eilenberg-Moore algebras), so monads can also be seen as generalizing universal algebras. Even more generally, any adjunction is said to be monadic (or tripleable) if it shares this property of being (equivalent to) the Eilenberg-Moore category of its associated monad. Consequently Beck's monadicity theorem, which gives a criterion for monadicity, can be used to show that an arbitrary adjunction can be treated as a category of algebras in this way.

The notion of monad was invented by Roger Godement in 1958 under the name "standard construction." In the 1960s and 1970s, many people used the name "triple." The now standard term "monad" is due to Mac Lane.

is a category, a monad on

consists of a functor

together with two natural transformations:

denotes the identity functor on

). These are required to fulfill the following conditions (sometimes called coherence conditions):

We can rewrite these conditions using following commutative diagrams:

, or see below the commutative diagrams not using these notions:

The first axiom is akin to the associativity in monoids, the second axiom to the existence of an identity element. Indeed, a monad on

can alternatively be defined as a monoid in the category

whose objects are the endofunctors of

and whose morphisms are the natural transformations between them, with the monoidal structure induced by the composition of endofunctors.

The categorical dual definition is a formal definition of a comonad (or cotriple); this can be said quickly in the terms that a comonad for a category

is a monad for the opposite category

. It is therefore a functor

to itself, with a set of axioms for counit and comultiplication that come from reversing the arrows everywhere in the definition just given.

Since a comonoid is not a basic structure in abstract algebra, this is less familiar at an immediate level.

The importance of the definition comes in a class of theorems from the categorical (and algebraic geometry) theory of descent. What was realised in the period 1960 to 1970 is that recognising the categories of coalgebras for a comonad was an important tool of category theory (particularly topos theory). The results involved are based on Beck's theorem. Roughly what goes on is this: while it is simple set theory that a surjective mapping of sets is as good as the equivalence relation "x is in the same fiber as y" on the domain of the mapping, for geometric morphisms what you should do is pass to such a coalgebra subcategory.

The rich set of examples is given by adjunctions (see Monads and adjunctions), and the free group example mentioned above belongs to that set.

Here is another example, on the category

be the power set of

and for a function

, which assigns to every

takes a set of sets to its union. These data describe a monad.

Algebras for a monad

is a given monad on a category

together with an arrow

called the structure map of the algebra such that the diagrams

-algebras is an arrow

such that the diagram 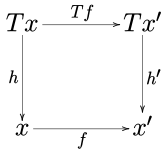 has a left adjoint

to the free algebra

, there exists another "canonical" category

called the Kleisli category of the monad

. This category is equivalent to the category of free algebras for the monad

, i. e. the full subcategory of

whose objects are of the form

is left adjoint to

are respectively the unit and the counit) always defines a monad

Conversely, it is interesting to consider the adjunctions which define a given monad

be the category whose objects are the adjunctions

. Then this category has

is a monadic adjunction when the category

is equivalent to the Eilenberg-Moore category

. By extension, a functor

is said to be monadic if it has a left adjoint

In categorical logic, an analogy has been drawn between the monad-comonad theory, and modal logic via closure operators, interior algebras, and their relation to models of S4 and Intuitionistic logics.

It is possible to define monads in a 2-category

. Monads described above are monads for